The “Dispose My Meds Program”is being launched in an effort to confront and halt the growing environmental threat of discarded pharmaceuticals finding their way into our bays, estuaries and landfills. 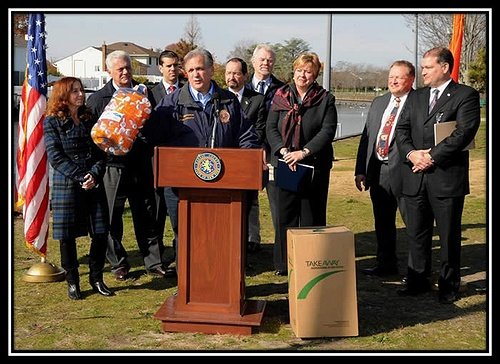 Studies over the last decade have detected pharmaceutical compounds in treated wastewater effluent, rivers, lakes, and ground water throughout the nation. According to the United States Geological Survey (USGS), over 80% of waterways tested in the nation show traces of common medications such as acetaminophen, hormones, blood pressure medicine, codeine, and antibiotics.

Working in cooperation to meet the challenge, United Water will provide King Kullen customers with pre-addressed, postage paid envelopes which they can fill with expired or unwanted medications. All the customer needs to do is drop the envelope into the nearest mailbox to ensure safe disposal and thereby participate in a program that further protects our environment. The effort has the additional benefit of eliminating surplus medications that too often fall into the wrong hands that, in turn, aggravate the region’s drug abuse crisis.

This initiative follows the successful introduction of Prescription Drug Disposal Bins at Nassau County Police Precincts and Policing Centers by County Executive Mangano in February of 2012. To date, nearly 13,000 pounds of pharmaceuticals have been collected in these bins.

“I applaud the efforts of United Water and King Kullen for helping to protect our waterways by giving our residents another avenue in which to dispose of their unwanted, unused and expired medication,” said County Executive Mangano. “It is imperative that we get these unwanted medications out of medicine cabinets and into disposal bins rather than our bays, landfills and estuaries. From the safety of our children and families to the betterment of our environment, this initiative is a win-win for all.”

Adrienne Esposito, Executive Director of Citizens Campaign for the Environment, commended the effort, stating, "Protecting our environment, safeguarding our public health and helping to stem drug abuse is a great campaign that benefits us all.”

Suffolk County Water Authority Chairman Jim Gaughran, said, “An aging population, the ever growing demand for medications and a consumer base largely unaware of the threats posed by inappropriately discarded pharmaceuticals has prompted this regional response to an increasing environmental menace. We welcome the role of United Water and King Kullen in advancing a solution to this threat.”

Richard Henning, United Water’s Senior Vice President for Communications, stated, “It is established science that a continuous exposure to low levels of pharmaceuticals can harm aquatic communities and ground water. Long Island is particularly susceptible to this double threat and we need to expand and strengthen our pilot program that began to address this problem following its introduction last year.

King Kullen’s Director of Pharmacies Al Hesse, explained, “There is a potent and difficult cocktail of drugs being tossed away every day by consumers and it is creating a genuine threat to our eco system and those who inhabit it. As early as 2006, the USGS was reporting the bizarre discover of `intersex fish’ in the Potomac River and its tributaries. The fish, smallmouth and largemouth bass, were male but nevertheless carried immature eggs. The conclusion of the investigators at the time was that these fish had consumed or absorbed a variety of drugs that included hormone residues. The lesson for the rest of us is clear and unmistakable.”