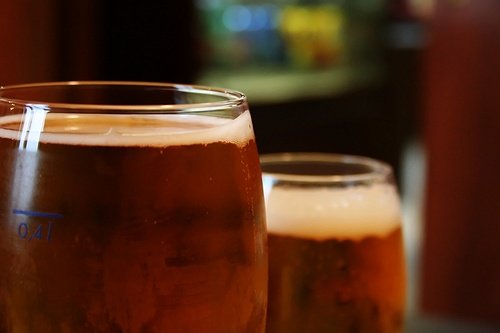 Albany, NY - November 13th, 2014 - Governor Andrew M. Cuomo today signed the craft beverage law to cut burdensome requirements placed on producers and ease restrictions regarding the marketing of craft products. To further develop the industry and raise the profile of New York’s beverage producers, the Governor also launched the Craft Beverage Grant programs—a $2 million Craft Beverage Marketing and Promotion Grant Program and a $1 million Craft Beverage Industry Tourism Promotion Grant. Both the legislation and new grant programs are part of the Governor’s promise made at the second Wine, Beer, Spirits & Cider Summit to continue to support and provide resources for this growing industry.

"New York produces some of the best wine, beer, spirits and cider in the world—an industry which not only creates jobs but supports farmers and brings in tourism dollars across every corner of the state," Governor Cuomo said. "This new law builds upon this administration’s ongoing efforts to promote this industry by cutting red tape, reducing burdensome regulations and removing artificial barriers that stifled growth. New York is truly open for business, and I thank my partners in the legislature for their hard work in making this a success for all of our craft beverage businesses."

The Craft New York Act, which will take effect in 30 days, provides New York manufacturers with greater opportunities to market their products, including:


State Liquor Authority Chairman Dennis Rosen said, “By working collaboratively with the industry, this administration has enacted significant legislation and created a regulatory framework that has helped to foster the remarkable growth in craft beverage producers over the last four years. The changes signed into law today will further assist in these efforts, by increasing both marketing and sales opportunities, in addition to raising the amount of product our small craft manufacturers can produce.”

The $2 million Craft Beverage Marketing and Promotion Grant Program, which was created to increase the profile, awareness and sales of New York State produced wine, beer, spirits, and hard cider, will provide matching funds for the marketing and promotion of craft beverages. Up to $500,000 will be awarded to eligible not-for-profit organizations to help cover the costs associated with marketing the craft beverage industry. This includes the purchase of recognized media advertising, production costs of print collateral and audio/visual, industry related tours, marketing materials, and website design, development, and updates. Applicants must incorporate the Taste NY initiative, and the funding is provided by Empire State Development in coordination with the New York State Department of Agriculture and Markets.

Also available is $1 million for the State’s Craft Beverage Industry Tourism Promotion Grant, which will help grow tourism across New York State by promoting destinations, attractions, and special events explicitly related to the craft beverage industry. Working capital funding of up to $250,000 will be awarded by Empire State Development for marketing-based tourism projects intended to create or retain jobs, increase tourism in the craft beverage industry and attract visitors to New York State. Successful projects will support the Regional Economic Development Council's long term strategic plans for economic growth in regions, as well as align with current I LOVE NEW YORK marketing strategies.

State Agriculture Commissioner Richard A. Ball said, “This new law signed by Governor Cuomo, coupled with new promotional funding, will help bring an already world class farm-based beverage industry to new heights. The growth of this industry is truly unprecedented and it’s still showing no signs of slowing down. The opportunities for New York agriculture that have been created during this boom continue to expand every year, in turn providing jobs in local economies and fueling economic growth throughout the state.”

Empire State Development President, CEO & Commissioner Kenneth Adams said, “With the craft beverage business booming throughout New York State, these new grant programs build on our existing resources to encourage the purchase of locally made products and attract visitors to the many production facilities and special events that directly impact the beverage industry. Our goal is to provide an opportunity for those who know the industry best to engage in the marketing of local, craft beverages to create new jobs and spur investment.”

Eligible not-for-profit organizations can apply for both the Craft Beverage Grant Program and the Craft Beverage Industry Tourism Promotion Grant by submitting a Consolidated Funding Application. Additional program information and guidelines can be found here. For more information, please contact Sam Filler at nysbevbiz@esd.ny.gov or (518) 227-1535.

Senate Co-Leader Dean Skelos said, "By cutting burdensome regulations and increasing support for craft beverage producers, the state is helping to provide even more opportunities for them to succeed and grow. This important industry is playing a vital role in many of our communities -- including upstate -- in boosting tourism, generating economic activity and creating new jobs. I am proud to join my partners in government in passing this new law."

Senate Co-Leader Jeff Klein said, "Under Governor Cuomo's leadership, New York has seen a surge in the number of craft breweries, which will create hundreds of good paying jobs right in our backyard. This legislation marks another milestone in our efforts to promote new industries and make state government work for our small manufacturers. I applaud the Governor for signing this important agreement and look forward to working together to bring many more innovative ideas to fruition that will help grow our economy."

Senator Carl L. Marcellino said, “Working together, we have demonstrated our priority to make sure that New York State is business friendly and responsive to the needs of New Yorkers. This legislation relieves the burdensome obstacles that prevent manufactures of craft beverages from getting their product to consumers and will help create new jobs in the States beverage manufactures."

Assembly Speaker Sheldon Silver said, “With more opportunities available than ever before, New York’s craft beverage producers are increasing their product sales and creating numerous jobs. The Assembly is committed to supporting these businesses and ensuring that the industry continues the rapid growth we have seen over the past several years. This is a win for our hometown manufacturers, and further proof that we are working hard to keep New York State open for business and I thank Governor Cuomo for taking the lead on this issue.”

Jim Trezise, President, New York Wine & Grape Foundation said, “The business climate for the New York wine industry has never been nearly as good as it is today, thanks to Governor Cuomo’s vision, commitment and leadership. Just like we need a good climate to grow good grapes, we need a good business climate to grow this industry. We are also glad that his support extends to our colleagues in the craft beer, spirits and cider sectors as well. The Craft New York Act has many benefits from production efficiencies to new marketing opportunities, and the Craft Beverage Grant programs will create increased awareness, trial, and sales of our products. This is a totally new era.”

Paul Leone, Executive Director, New York State Brewers Association said, “Governor Cuomo's administration has been one of the most forward thinking administrations in the country. By signing the Craft New York Act into law, small brewers in this state are now afforded an opportunity to continue their growth, further adding jobs to New York's economy. We also want to thank the SLA, ESD, and Ag & Markets for their continued support in the growth of craft beer in this state. With the SLA making it easier and quicker to open a brewery in conjunction with ESD and Ag & Markets providing marketing and advertising funding opportunities, New York State is now set to have over 200 craft breweries opened by early 2015.”

Nicole Austin, President, New York State Distillers Guild said, “The New York Craft Act is a major step forward in modernizing our regulations. The New York State Distillers Guild is grateful for Governor Cuomo’s commitment to supporting the craft beverage industry, and we are thrilled to have these opportunities to invest our visitor operations and promote local spirits. Each of our distilleries are growing enterprises – hiring new employees, working with other local businesses, and supporting New York farmers. The New York Craft Act creates a business climate that fosters this growth, and the Craft Beverage Grant Program gives us to support we need to really run with it. Cheers to that!”

Brian Mckenzie, Vice President, New York State Distillers Guild and Owner of Finger Lakes Distilling, which was a stop on the Governor’s Wine Cup tour this summer, said, “The NYS Distillers Guild is excited to hear about the Governor signing the Craft Act into effect. The law will create great opportunities for our young industry to grow. The administration has been very supportive by modernizing the antiquated laws that have made it difficult to do business in the past and helping with promotional opportunities. The changes have helped create 60 new businesses in New York State that are adding jobs, tax revenue, tourism and benefits to local farms. The Craft Act will help to accelerate the positive economic impacts our industry is making throughout the State."

Sara Grady, Vice President of Programming, Glynwood said, “The growth of the New York craft cider industry has been tremendous, creating new opportunities for New York's orchards and agricultural entrepreneurs. As an apple state, New York has a unique opportunity to be both enriched and distinguished by the quality ciders that are proliferating here. By giving support to this burgeoning industry and its nascent NY Cider Association, Governor Cuomo's Craft Act and grant funding will strengthen New York's economy and farms - and help to ensure that cider becomes a signature New York beverage.”

Nate and Josie Holden, owners of Nedloh Brewing Co., a farm brewery which opened Oct. 4, 2014 in Ontario County said, “New York was the nation’s hops capital until disease and prohibition wiped it out. With Governor Cuomo’s support and leadership, we’ve not only seen a resurgence in craft beer, but the agriculture we depend on as well. The 2014 Craft Act will continue the growth in the industry, helping Nedloh make more remarkable hand-crafted brews while also promoting New York’s wide range of world-class beers, wines, ciders and spirits. Giving people more opportunities to experience what New York has to offer will be sure to boost business and tourism.”

Bill Barton, Owner, Bellwether Hard Cider said, “Governor Cuomo's second Craft Beverage Summit delivered two very significant benefits to all the craft beverage industries.  First, the SLA worked with the industry to develop smart regulation that will dramatically reduce a great deal of the usual compliance burdens.  Second, the icing on the cake from the Governor is a grant program to provide us with very generous promotional funding so that we can compete both in our own backyards and outside New York. Both initiatives are fundamental to the success of newer New York craft beverage sectors such as cider and distilling.”

Both the number of farm based businesses manufacturing wine, beer, spirits and cider using ingredients grown in New York and the total number of manufacturers producing alcoholic beverages have more than doubled since 2011. Since Governor Cuomo took office, 220 new farm based businesses have opened across New York, including 101 new farm wineries, 62 farm breweries, 49 farm distilleries, and 8 farm cideries.