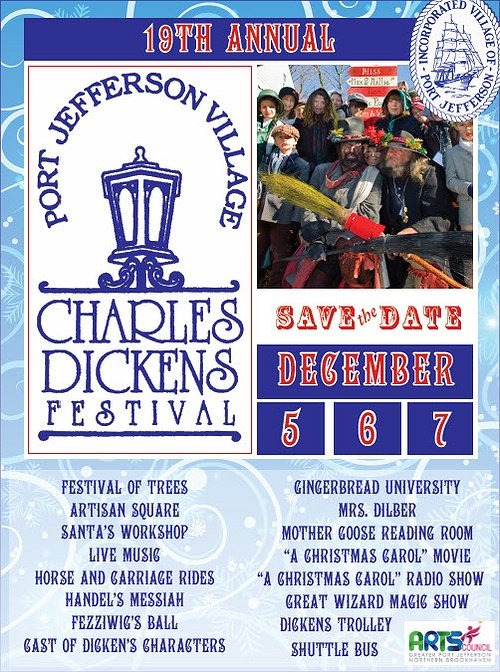 The Village of Port Jefferson will magically transform into the Dickensian era with streets filled with roaming characters such as Father Christmas, Dickens Mayor, Scrooge, the Town Crier and the beloved chimney sweeps.  Building on the Internationally-renown festival The Council proudly announces the Festival of Trees event with a theme from the popular “Frozen” film debuting on Friday’s opening night.  For the first time, the Village Center will be the home of Gingerbread University, where children can decorate their own holiday oriented cookies and houses!

The events are open to the public and most attractions are free of charge, so everyone - from the very young to the young at heart can join in the fun.  The festivities will feature many returning favorites; ice skating at the Village Center, a cappella performance by choirs and harmony groups, Nutcracker performances, magic shows by The Great Wizard of the North, and many fine musical performances by area musicians. In addition, this year's festival will feature Theater Three's 31st Annual production of A Christmas Carol.

We are very pleased to celebrate Theater Three’s very own, Jeffrey Sanzel as the Honoree of the 19th Annual Charles Dickens Festival.  Jeffrey’s accomplishments will be recognized at the Opening Ceremony and before the Christmas Carol production the evening of Friday, December 5th.

As in past years, East Main Street will become Dickens Alley and the return of Fezziwig's Ball, featuring live music on traditional instruments led by a dance caller.  An impressive model train display will be featured in Harbor Square Mall and, special readings by Mother Goose will take place at the Port Jefferson free library. Horse and carriage rides and the new Port Jeff Jitney bus will help transport visitors to the various venues throughout the village for the entire weekend.

The popular Victorian Walking Lanternlight House Tour will return on Saturday evening from 4:30 to 8:30 PM.  Tickets for the Lanternight Tour is $25. The tour, plus ‘Seasonal Cheer Gathering’ is $45 from 4:30-8:30, which starts gathering at Oldfields Restaurant at 3:30pm. A shuttle is provided for the route. For tickets call the Chamber 631-473-1414.

A holiday tradition and highlight of the festival is Santa’s Workshop.  Join Santa and his elves and wind through three whimsically decorated rooms.  Twinkling white lights, elaborate confection displays, and the giant nutcrackers are just a few of the signature elements that bring the Magic of Christmas to life.  The workshop opens November 30th, and continues December 6, 7, 13 and 20.

The 19th Annual Dickens Festival will conclude with a Parade of Puppets and ceremony at Village Hall on Sunday evening.  For the schedule of events, please visit the website.

The Fabulous Festival of Trees and FROZEN Opening Night Celebration
Come one, come all on Friday evening, December 5, from 7:00 to 9:00PM, to join our Festival of Trees Opening Night Celebration at the Port Jefferson Village Center. The second floor will host a magical presentation of Christmas trees featuring decorations that are guaranteed to dazzle and delight. Each tree will present the sponsors vision expertly crafted and garnished…and not to be missed. The Rinx Ice Skating will welcome skaters with a special offer: bring in a non-perishable food item that will be donated to a food pantry and receive a discount on the skating fee. Also presented will be a spectacular ice skating demonstration featuring actors in Frozen® and other character costumes and guests may bring in a donated ornament and hang it on the “community tree.”  Rounding out the evening will be a DJ spinning, a Frozen sing along hosted by the PJ Free Library, light refreshments provided by local eateries, Tommy’s and Schafers and the many memorable smiles and lots of laughter.
*Festival of Trees will be on display through Dec. 19th.

Gingerbread University
Gingerbread University will make its Dickens debut at the Harbor Master’s building on the harbor side of West Broadway (across from Santa’s Workshop and next to the Artisan Square by Graceful Rose Restaurant) between 11:00 AM and 5:00 PM on Saturday and Sunday, December 6 and 7, 2014. The building will be decked out with elaborate decorations supporting the Gingerbread/Christmas theme. Three types of houses will be available for purchase, Christmas, Chanukah and Kwanza, as well as an array of giant gingerbread figures to include a Christmas Tree, Snowman, Train, Holiday Bear, Dreidel and a Giant Gingerbread Man. Each item comes along with candy and royal icing for on the spot decorating. Bring the family and get an official “Graduated from Gingerbread University” declaration. Fees apply.

Artisan Square
The Artisan Square, sponsored by the Richard and Mary Morrison Foundation, will feature five artisans who will demonstrate how crafts were done during Dickens’ time. The Arts & Crafts movement began in Victorian Britain in the 1860s as a response to the demise of the older craft guilds in favor of industrialized manufacturing. Lead by artist and writer William Morris, the Arts & Crafts movement sought to bring back high quality, handmade workmanship. Our Dickens Festival Artisans utilize 19th century tools and educate festival attendees in the creative process behind their respective crafts. In addition to demonstrating techniques, they engage festival attendees in conversations that encourage a comparison between old and modern tools, methods and products that are used in everyday life.