A kennel worker, not a vet tech pleads guilty to three (3) felonies and two (2) misdemeanors and receives a conditional discharge instead of jail time and probation. 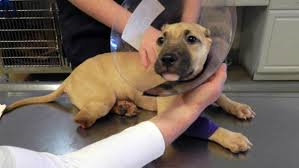 Bethpage, NY - November 9, 2015 - A kennel worker, not a vet tech pleads guilty to three (3) felonies and two (2) misdemeanors and receives a conditional discharge instead of jail time and probation. The judge, Angelo Delligati stated that the defendant now had plans to move to Georgia and to give him probation would not have allowed him to move and would have upset his plans. As one of many in the courtroom who was stunned by the Judge's action, we are surprised the court didn't award the defendant free airplane tickets.

The judge also was "abhorred" by the defendant's actions but gave him "slight credit" for not being an abuser of animals! Completely cutting off the ears and half of a leg without an anesthetic, without any medical training or expertise qualifies for what?

All of us have been horrified and outraged many times when we hear of a tragedy that occurred and the punishment that ultimately is rendered by the judge. We're stuck with a court system governed by politics that rarely gives us the most qualified candidates, who also are rarely accountable for their actions.

The County Executive, the Attorney General and the District Attorney's office have been on board with the Nassau County SPCA in prioritizing the enforcement of animal cruelty laws, but sadly these worthwhile efforts are falling on deaf ears when we get to the judges. As we stated the message being sent by Judge Delligati, "is that animal cruelty and abuse are condoned actions in Nassau County ".

To change the thinking, we are calling for a sustaining action of ongoing phone calls and letters to Judge Delligati that his insane decision is not acceptable. He has a responsibility to the community to show that abuse of an animal will not be tolerated and most importantly, you will be held accountable. One call or one letter will fail because the involved people count on something eventually fading away. We have to show them that we will not quit until we see a significant change in their actions. Please join us in our quest for justice for Miss Harper, who is a lifetime member of our agency!