Alexandria Bombach, the director of the award-winning film, ‘On Her Shoulders,’ is Tom Needham’s guest on WUSB’s ‘The Sounds of Film.’ 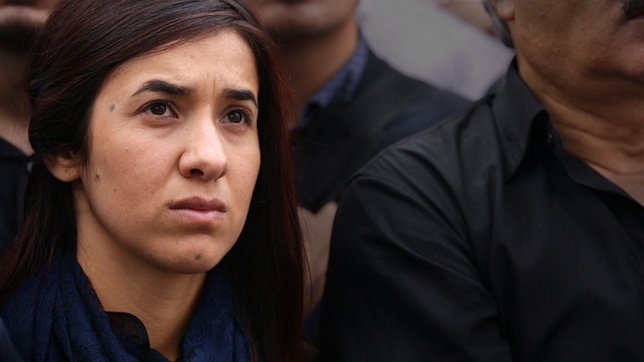 Photo by: Courtesy of onhershouldersfilm.com

Stony Brook, NY - November 6, 2018 - Alexandria Bombach, the director of ‘On Her Shoulders,’ a documentary about activist Nadia Murad, is Tom Needham’s exclusive guest this Thursday at 6 pm on WUSB’s ‘The Sounds of Film.’
‘On Her Shoulders’ is the winner of the Sundance Film Festival’s Directing Prize and the winner of the Camden Film Festival’s Award for Best Documentary. The film presents a deeply moving portrait of Yazidi genocide survivor-turned-global advocate Nadia Murad. The twenty-three-year-old’s life is a dizzying array of important undertakings—from giving testimony before the U.N. to visiting refugee camps to soul-bearing media interviews and one-on-one meetings with top government officials.  The film follows this strong-willed young woman, who escaped sexual slavery at the hands of ISIS to become a relentless beacon of hope for her people.
About the Sounds of Film
The Sounds of Film is the nation’s longest running film, music and issues themed radio show. For the past 30 years, the program has delivered a popular mix of interviews and music to listeners all over Long Island, parts of Connecticut and streaming live worldwide on the internet. Previous guests include CNN’s Don Lemon, director/actor Alex Winter, composer Mike Patton, composer Tree Adams, Wendy & Lisa, director Lauren Greenfield, Alexandra Pelosi, John Tartaglia, and Rory Kennedy.