Brooke Corey, a two-year-old Mill Neck resident, has undergone a battery of blood tests, MRIs, X-rays and bone biopsies in an effort to pinpoint a diagnosis. 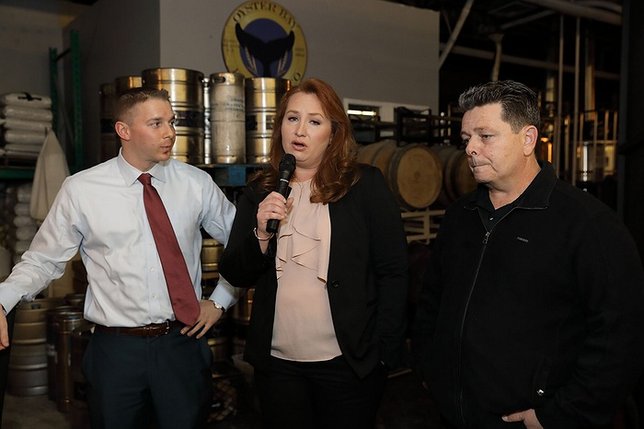 Oyster Bay, NY - November 2, 2018 - More than $30,000 was raised to support a chronically ill 2-year-old child and her family during a Monday, Oct. 29 fundraiser that was co-hosted by Nassau County Legislator Joshua Lafazan (Woodbury) at the Oyster Bay Brewing Company.
Legislator Lafazan became involved after hearing the story of Brooke Corey, a two-year-old Mill Neck resident who has gone from being an active toddler to chronically ill in the span of just a few months. Since then, she has undergone a battery of blood tests, MRIs, X-rays and bone biopsies in an effort to pinpoint a diagnosis.
The hundreds of supporters in attendance included Brooke’s parents, Ken and Sheri Corey, and leaders of the Oyster Bay Chamber of Commerce and Oyster Bay Civic Association among others. The Oyster Bay Brewing Company donated the venue, bartenders and the entire bar tab for the evening’s fundraiser, and food was provided by the Coach Grill and Tavern and Spinnakers Restaurant and Bar.
For more information, please contact Danny Schrafel at 516-571-4214 or
dschrafel@nassaucountyny.gov.
“Thanks to the generosity and tremendous hearts of residents and the Oyster Bay business
community, we raised a significant sum of money that will allow the Corey family to focus on the one thing that matters most right now - helping Brooke become healthy,” Legislator Lafazan said. “I am overjoyed to see how our community has embraced the Corey family in their time of need.”