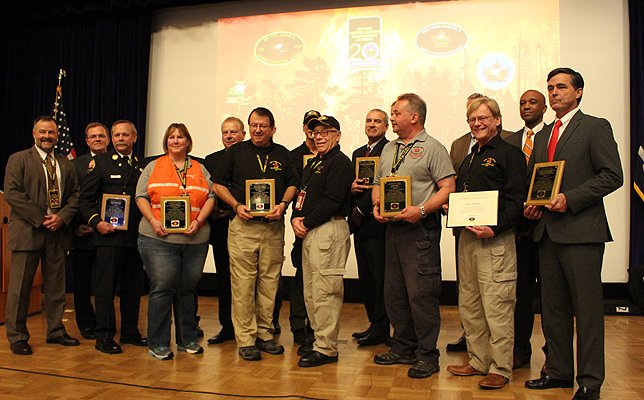 Suffolk County, NY - October 27, 2017 - On Thursday, October 26, the New York Wildfire & Incident Management Academy celebrated its 20th anniversary by honoring the longtime partners that have been integral to the Academy’s success, including the Suffolk County Water Authority.
“We are so proud to support the New York Wildfire & Incident Management Academy and the work they do,” said SCWA Board Member Dr. Errol Toulon, Jr. who accepted Thursday’s plaque. “Whether it’s lending our staff, office and meeting space, storage space or other resources, we look forward to continuing our great partnership with the Academy.”
The New York Wildfire & Incident Management Academy has worked to provide a high level of training for thousands of firefighters, first responders and civilians from around the Unites States since 1997. Its motto is “quality training through interagency cooperation.”
Numerous Suffolk County Water Authority employees are among those trained by the Academy over the years, and the Authority has contributed to the Academy’s success by dedicating staff time, meeting space and other resources.
The plaque reads: “As a long-time team member, the tremendous support of the Academy you have demonstrated during your tenure and the substantial efforts you have undertaken which have aided the Academy and which resulted in the education and training of thousands of students in New York, the United States and around the globe in the areas of wildfire management and incident response.”
The ceremony, at which 14 organizations or individuals were presented with plaques, took place at the Academy’s primary training grounds at Brookhaven National Laboratory in Upton.
“Thank you for all your hard work over these last 20 years,” Toulon said. “Suffolk County and New York State are safer places to live and work because of your efforts.”
The Suffolk County Water Authority is an independent public-benefit corporation operating under the authority of the Public Authorities Law of the State of New York. Serving approximately 1.2 million Suffolk County residents, the Authority operates without taxing power on a not-for-profit basis.