Shakespeare’s Twelfth Night in the Roarin’ Twenties at AUPAC 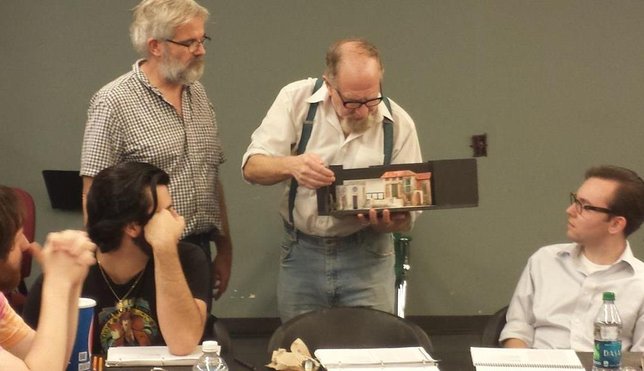 Garden City NY - October 2014 - Adelphi University Performing Arts Center (AUPAC) will present Shakespeare’s classic comedy Twelfth Night, from November 4 through 9, 2014 in the Olmsted Theatre, 1 South Avenue, Garden City, NY. One of Shakespeare’s most famous comedies, Twelfth Night is a wild story of love and mistaken identities. Many of Shakespeare’s classic comedic devices – a young woman dressed as a young man, twins, fools, and gender-confused romance, to name a few – make an appearance through what is widely considered his last “happy comedy.”

To express fully and uniquely the rich romance of Twelfth Night, Adelphi’s production will be set in the 1920s on the French Riviera. This combination of place and time allows for the exotic expression of the style and elegance that is central to the play, while being true to the story’s need for a beautiful seaside location. The setting gives as much of an opportunity to the Department of Theatre's talented design faculty and students as the text of the play provides for the actors.

Twelfth Night is directed by Dr. Brian Rose, professor in the Department of Theatre. Dr. Rose has given thousands of performances of more than a hundred plays in his twenty-two year career as a critically acclaimed actor. He has also designed the “Experiencing London Theatre” program in which he travels to London with students from all departments at Adelphi for an intensive theatre-going study opportunity. His first production here, twenty years ago this month, was Shakespeare's Twelfth Night.

Adelphi University’s Performing Arts Center is one of Long Island’s premier cultural arts venues for entertainment of all kinds. Tickets for Twelfth Night are on sale now and are priced at $20 with discounts available to seniors, students and alumni. For more information about all the events at AUPAC and to purchase tickets, visit aupac.adelphi.edu. Information is available at The Lucia and Steven N. Fischer Box Office at (516) 877-4000 or boxoffice@adelphi.edu. Regular box office hours are Tuesday through Friday, from 1:00 to 6:00 p.m. The box office is also open two hours before most scheduled performances.

About Adelphi University
Adelphi is a world-class, modern university with excellent and highly relevant programs where students prepare for lives of active citizenship and professional careers. Through its schools and programs - College of Arts and Sciences, Derner Institute of Advanced Psychological Studies, Honors College, Robert B. Willumstad School of Business, Ruth S. Ammon School of Education, University College, College of Nursing and Public Health and the School of Social Work - the coeducational university offers undergraduate and graduate degrees as well as professional and educational programs for adults. Adelphi University currently enrolls nearly 8,000 students from 43 states and 45 foreign countries. With its main campus in Garden City and its centers in Manhattan, Suffolk County, and Poughkeepsie, the University, chartered in 1896, maintains a commitment to liberal studies, in tandem with rigorous professional preparation and active citizenship.