Hatton was recently promoted to Deputy Chief assigned to the Chief of Patrol’s Office. 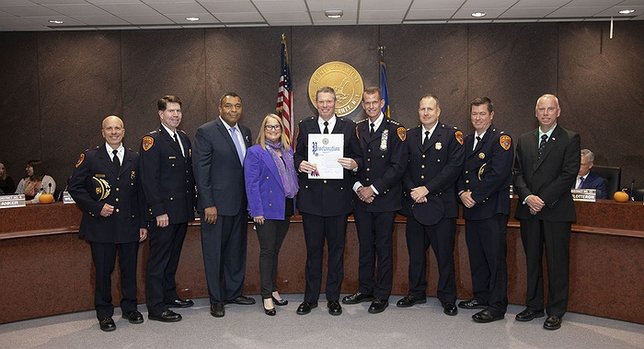 SCPD Deputy Chief Christopher Hatton was presented with a proclamation by members of the Suffolk County Legislature.

Hauppauge, NY - October 10, 2018 - Suffolk County Legislators Donnelly, Berland and Spencer presented Suffolk County Police Department’s Deputy Chief Christopher Hatton a proclamation for his service to the 2nd Precinct at the October 2nd General Meeting. His position as the precinct’s Inspector, which began in July of 2015, came to an end as he was recently promoted to Deputy Chief assigned to the Chief of Patrol’s Office, overseeing precinct operations throughout the police district.
“In 2015, when Chris Hatton assumed the role as our Inspector, there was deep concern throughout Huntington for the safety of the community. As the Officer in charge, he engaged the community, made it his business to fully understand the issues and skillfully used all resources available to successfully turn the situation around. His service has made a significant impact and it’s truly a privilege to present him with a proclamation,” said Legislator William R. Spencer.
“Inspector Hatton proved his dedication to the people of the Second Precinct every day he served here,” said Legislator Tom Donnelly. “He brought energy and commitment to every task and initiative he took up and our residents felt safe and secure with him at the helm.”
“It was my honor and privilege to present a proclamation to Deputy Chief Hatton in recognition of his exemplary service as Inspector of the Second Precinct,” said Legislator Susan A. Berland. “The residents of the Second Precinct were fortunate to have been the beneficiaries of Inspector Hatton’s outstanding effort and dedication which will now extend to all the residents of Suffolk County.”