Grandma pie and where to find the best on Long Island

The Grandma pie might very well be one of the best foods to ever come out of Long Island. 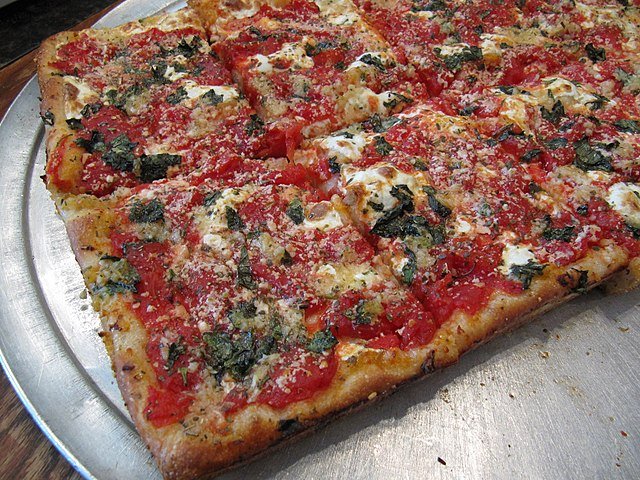 Long Island is known for many iconic food items that either were invented or perfected right here. The bagel and the bacon, egg and cheese (BEC) breakfast sandwich both come to mind. Also, pizza. (Yes, we know Brooklyn, you’re gonna fight us on this one!) If you’re from Long Island there is no lack of great pizza joints. It’s our obsession with pizza that allows us to support a handful of pizza places in almost every town.

While pizza itself is not a Long Island invention, there is one particular style that almost everyone can agree was popularized in the kitchens of Long Island pizzerias.

This rectangular pie is not a Sicilian pie. It’s crust is denser, thinner and topped with fresh tomatoes and a lighter coating of cheese. It’s said this style of pizza comes from the old country, when grandmas made homemade pizza baked in a pan.

Credit is usually given to King Umberto's in Elmont for first putting the Grandma pie on the menu. Since then, it’s taken off and almost every pizzeria on Long island has their own version. For a long time the style of pizza was unknown outside of Long Island (not even in New York City!) But, that’s changed and a quick Google search turns up recipes, stories and places in and around the region to get a Grandma pie (yes, including Brooklyn.)

We asked our readers to chime in on some of their favorite places to get a Grandma pie on Long Island. While there are just too many to realistically put in one article, just a few standouts are listed below. And of course, we humans must tinker with everything so there are many variations on the standard Grandma pie that you can find below.

People called out this place for its Grandma pie, but also give their alternative a try - what some call the Drunken Grandma pie - a Grandma pie made with Vodka Sauce that many said was very good here.

Made the 2018 list of best 101 best pizzas in America, specifically for its Grandma pie.

In our online survey, this is one of the few places that got more than one vote for their Grandma pie. They also make a Grandpa pie, which includes toasted breadcrumbs and sauteed onions.

This is the GOAT. A few other pizzerias got maybe 2 or 3 votes. Umberto’s was mentioned more often than not when asked who makes the best Grandma pie. It got most of the votes and mentions. Maybe it’s because legend says the Grandma pie originated in its sister pizza shop. Or maybe they just make the best damned Grandma pie on Long Island. You’ll have to make the journey yourself to decide.