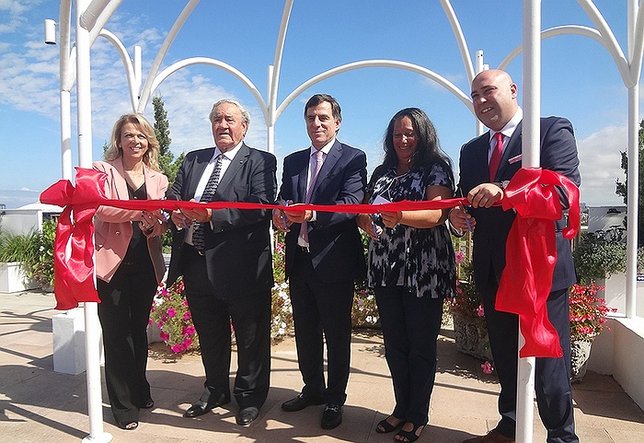 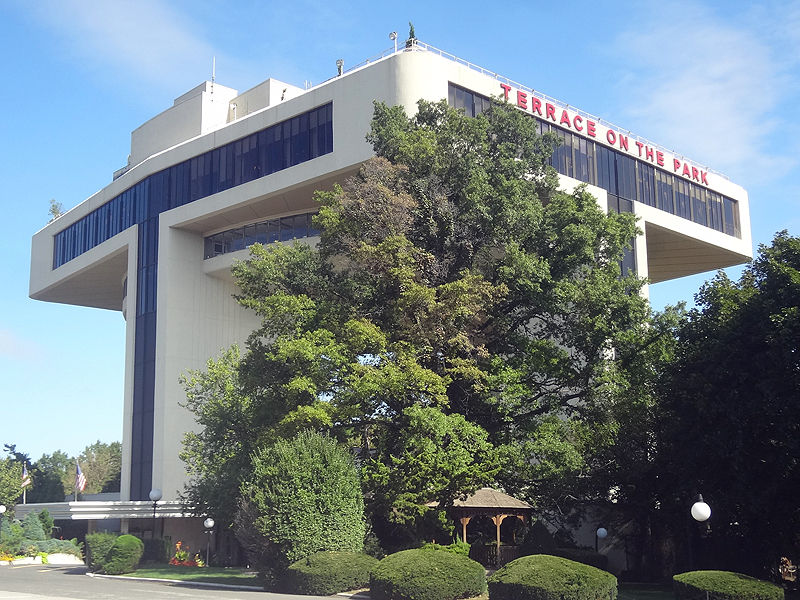 The lavish and ionic Terrace On The Park is located at 52-11 111th Street in Flushing, NY. Photo Credit: Chris Boyle
The pricey facelift, according to General Manager Bruno Marque, was to up-the-ante on the luxurious accoutrements and award-winning cuisine guests have come to expect from the famed catering and special event facility during its half-century of existence. 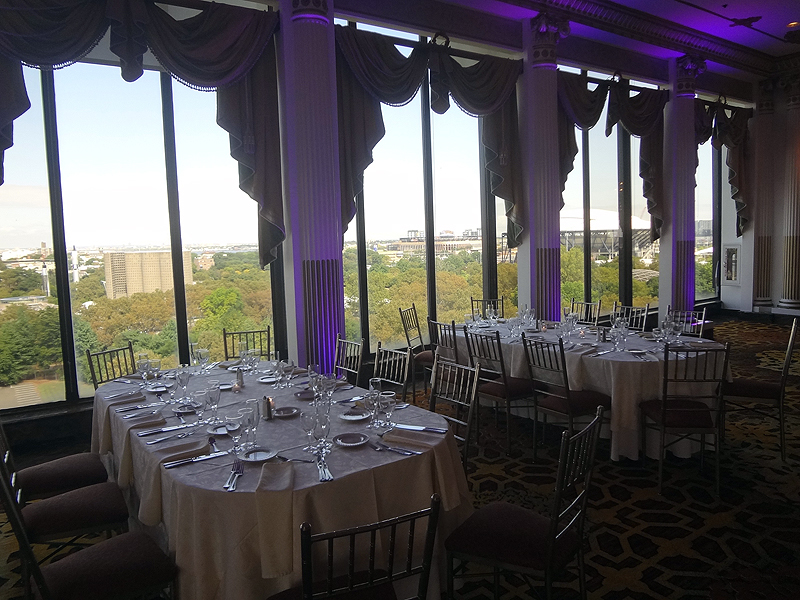 Terrace On The Park gained the most fame and recognition for serving as the spectacular setting for thousands of memorable weddings, parties, proms, and corporate events. Photo Credit: Chris Boyle
“The $9 million enhancement of Terrace On The Park was not because the place was untenable, or because it wasn't fresh…it was to keep up with modern times and to keep up with the demands of competition,” he said at the re-opening, held on Sept. 27. “We have something that a lot of other catering halls do not have…we have those views that are so stunning. The unobstructed views here of the Manhattan skyline, the Unisphere in Flushing Meadows Park, Arthur Ashe Stadium, the Hall of Science…it's just unparalleled and breathtaking, especially at night when everything is lit up.” 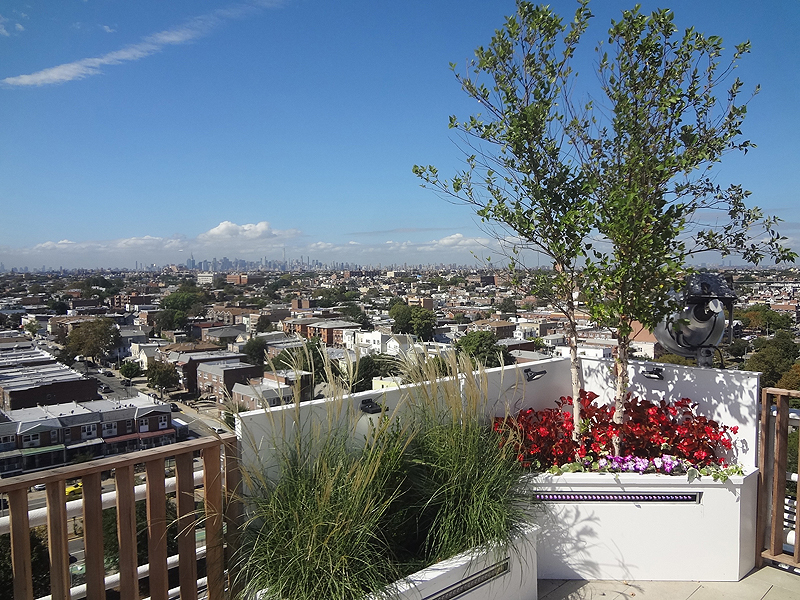 Terrace On The Park offers breathtaking views of the Manhattan skyline. Photo Credit: Chris Boyle
Originally built in 1964, Terrace On The Park began as a heliport for the 1964 World’s Fair, and has been host to high society and celebrity guests since its inception, including mayors, presidents, prime ministers, and visiting monarchs of foreign countries. In fact, when the Beatles made their United States debut at Shea Stadium in 1965, they first arrived on the Terrace’s rooftop helipad, and famed pop star Madonna – before making it big in the music industry – worked there as an elevator operator. 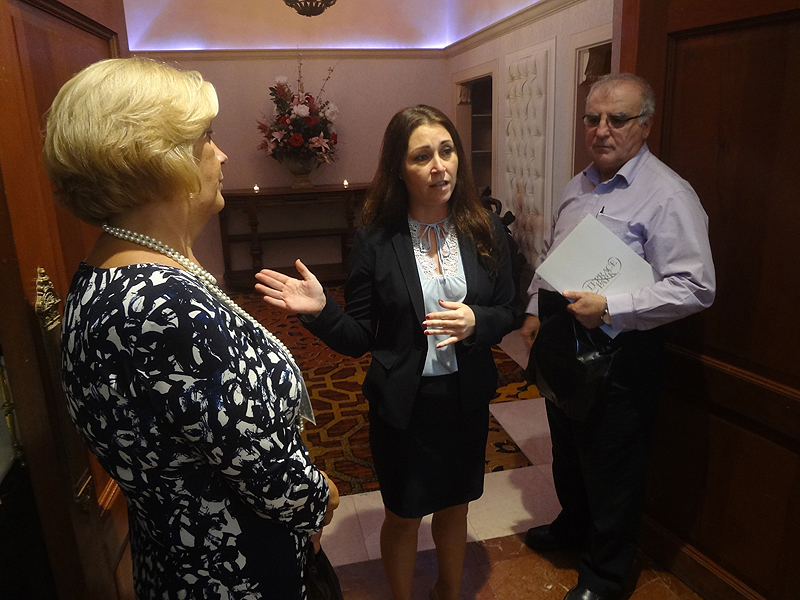 Sales Representitive Jennifer Jolly takes guests on a tour of Terrace On The Park's recently-renovaed facilities. Photo Credit: Chris Boyle
Over the years, however, Terrace On The Park gained the most fame and recognition for serving as the spectacular setting for thousands of memorable weddings, parties, proms, and corporate events, with the name soon becoming synonymous with luxury and top-notch service and dining. When it comes to the secret of Terrace On The Park's continued success, Marque noted that, in fact, there was no secret; just an adherence to time-honored traditions and values that place the customer and their experiences above all else. 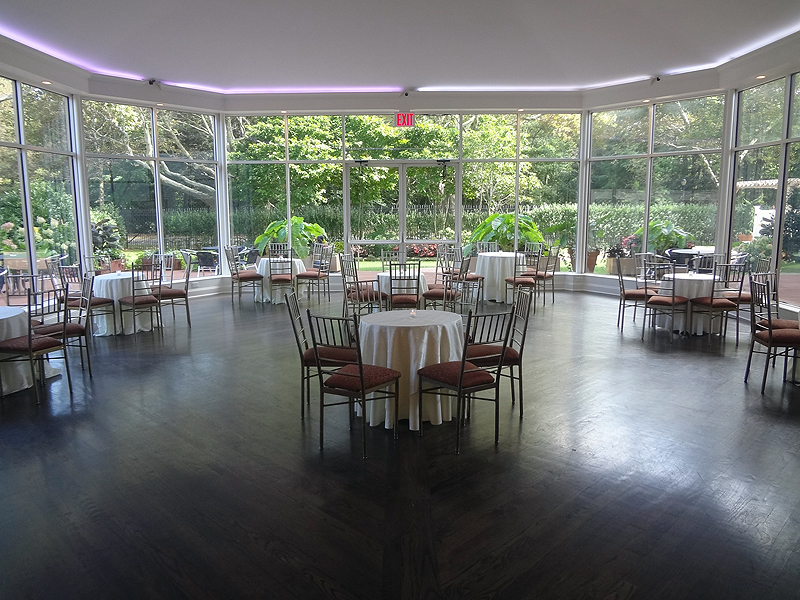 Terrace On The Park is synonymous with luxury and top-notch service and dining. Photo Credit: Chris Boyle
“There are three major things that catering and hospitality facilities need to provide... service, ambiance, and food,” Marque added. “If you have all three, and they all work in sync, you have nothing to be ashamed of, and you have everything to be proud of.” 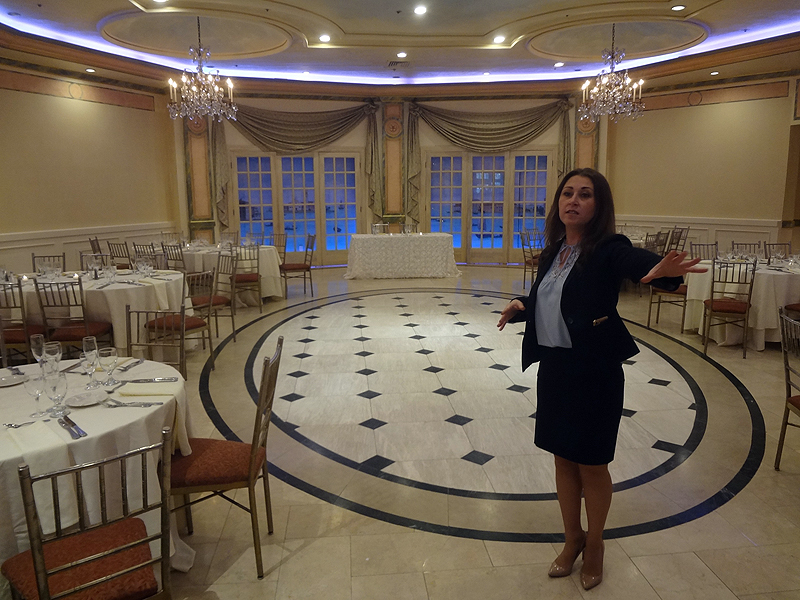 Sales Representitive Jennifer Jolly takes guests on a tour of Terrace On The Park's recently-renovaed facilities. Photo Credit: Chris Boyle
In order to cement and maintain Terrace On The Park's impeccable reputation for excellence and combine it with a cutting-edge, modern sensibility, it was decided to make a capital investment into upgrading the facilities five years ago; a project that has finally come to completion and whose impressive results, quite frankly, plainly speak for themselves. 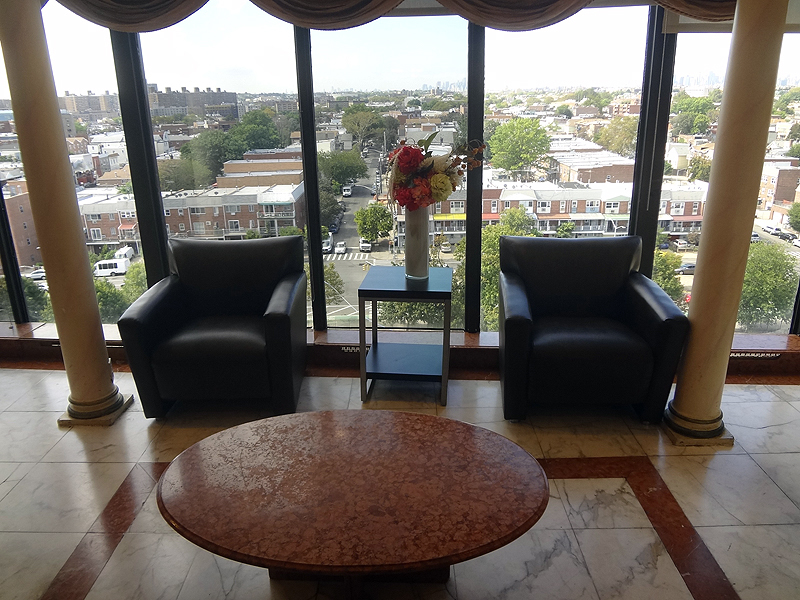 The vast and myriad improvements to Terrace On The Park were made with only the finest materials and designs available and with an unerring eye for detail. Photo Credit: Chris Boyle
Among the changes and improvements that came with the $9 million project include revitalizing all of Terrace On The Park’s ballrooms in an elegant, contemporary style. In addition, a new Promenade level has been opened – featuring  two new party spaces – as well as three private gardens on the Parkside level that boast lushly landscaped foliage; these new areas are ideal for receptions, brunches, or any other sort of outdoor entertainment that the mind can muster.  Also, there have been extensive technological upgrades as well, such advanced LED lighting systems that allows guests to completely personalize the look and ambience of their event, including choosing the exact color of the lighting and more. 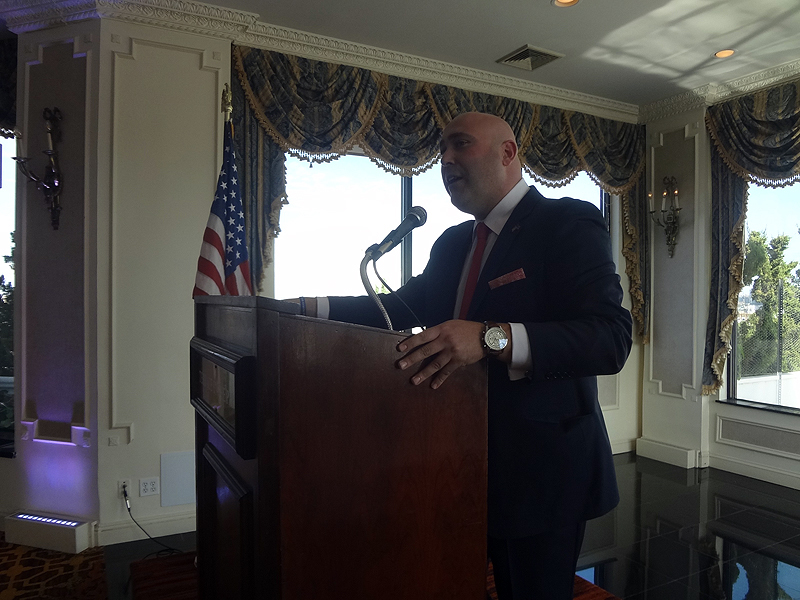 Terrace On The Park's General Manager, Bruno Marque, speaking at a press event held at the Grand Re-Opening event. Photo Credit: Chris Boyle
The vast and myriad improvements to Terrace On The Park were made with only the finest materials and designs available and with an unerring eye for detail, according to according to Marque. 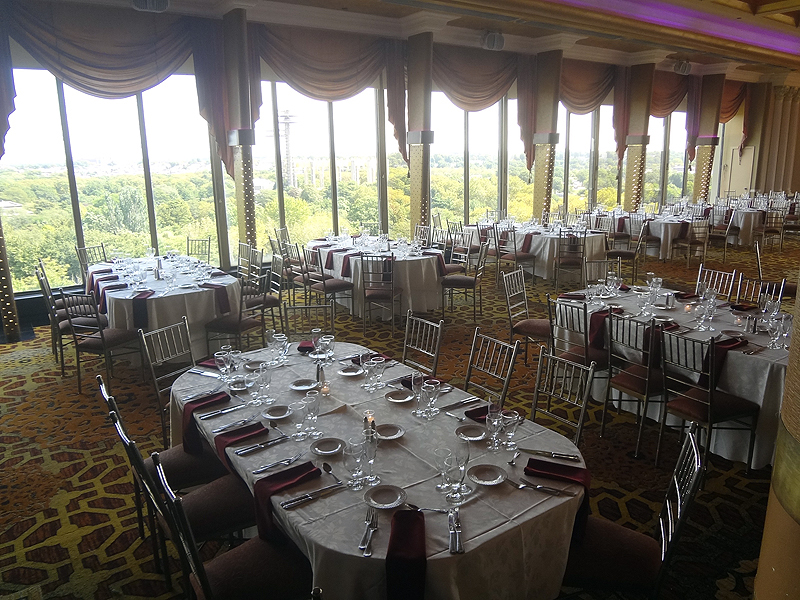 Terrace On The Park features dining options for guests to account for every taste and dietary specification. Photo Credit: Chris Boyle
“The carpet was imported from England and 3,000 square yards of it was put down throughout the building,” he said. “3,000 gallons of paint were used on the outside of the facility as well, and the outside deck was worked on vigorously in order to get it done on time. 12,000 square feet of pavement had to be laid out with 5,000 square cubic yards of gravel so the drainage underneath goes out properly. It's just incredible.” 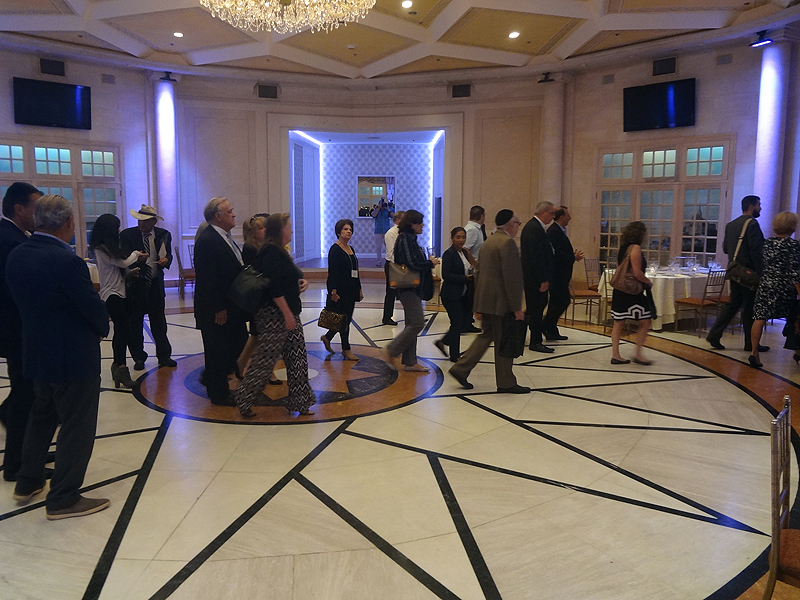 Guests are shown through one of Terrace On The Park's extensively-renovated Grand Ballrooms. Photo Credit: Chris Boyle
While the renovation project was ongoing, the facility’s famed menu also underwent some tweaking; Executive Chef Jose Cerqueira – known for being a finalist on the television cooking competition Iron Chef – oversaw an expansion of Terrace On The Park’s acclaimed catering department. With an accomplished team of chefs underneath him, Cerqueira has expanded the dining options for guests to account for every taste and dietary specification. 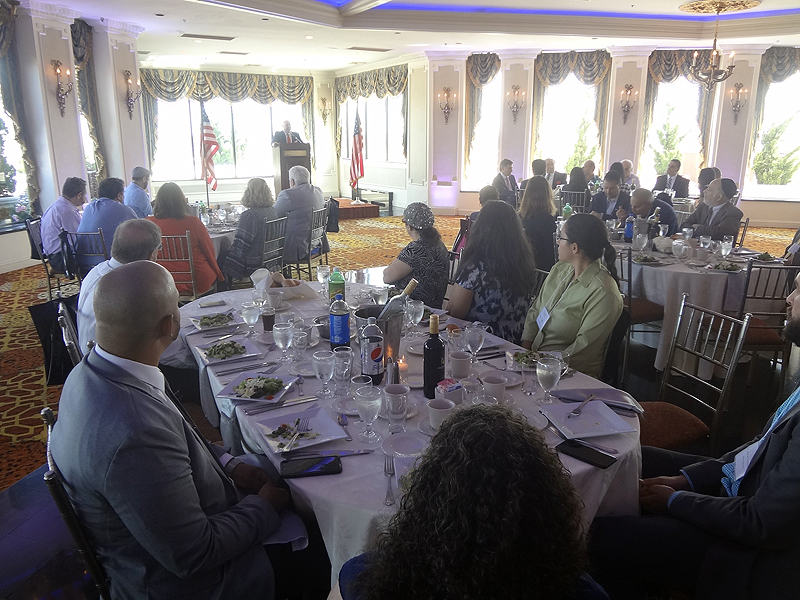 Terrace On The Park's General Manager, Bruno Marque, speaking at a press event held at the Grand Re-Opening event. Photo Credit: Chris Boyle
With the Grand Re-Opening ribbon cutting on Sept. 27 – attended by press and local dignitaries and held on the rooftop level, with its expansive and awe-inspiring 360-degree view of the visual magnificence of both Queens and Manhattan – Marque declared his deep love for being involved with a beautiful and historic landmark such as Terrace On The Park, saying that he looked forward to the many happy memories and experiences he and his staff would continue to provide for guests in the coming days, years, and decades. 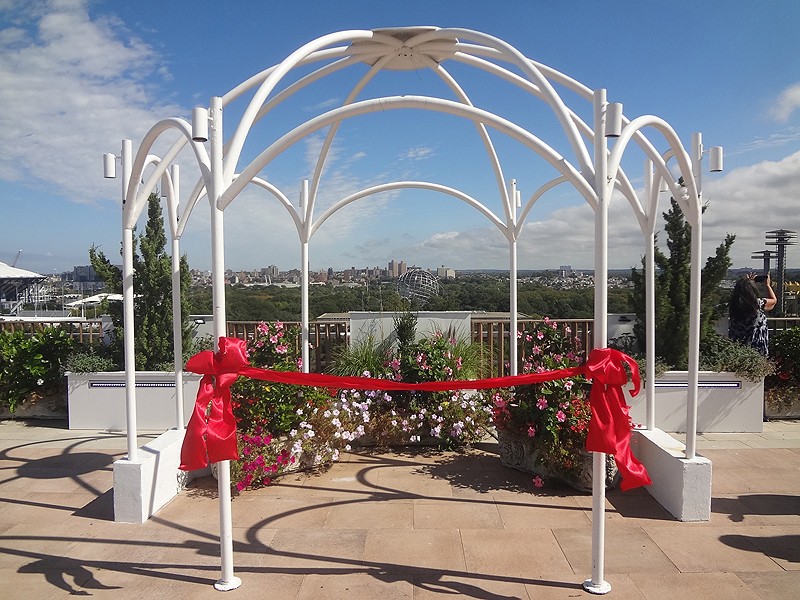 Terrace On The Park's unobstructed views of the Unisphere in Flushing Meadows Park, Arthur Ashe Stadium, the Hall of Science and more are unparalleled and breathtaking. Photo Credit: Chris Boyle
“I've been here eleven years, and when I walk out onto the penthouse deck and I look out…it’s still just such a breathtaking moment,” he said. “I'm like, ‘wow, I'm so happy to be a part of this.’ And I'm so happy to be a part of a group that can offer this to people who want that special moment in their lives. We have an amazing team here who really puts together everything to make every day better and every client happier for their special day, and whether it’s a social or corporate outing, any event that comes in here is a special moment in somebody's life."