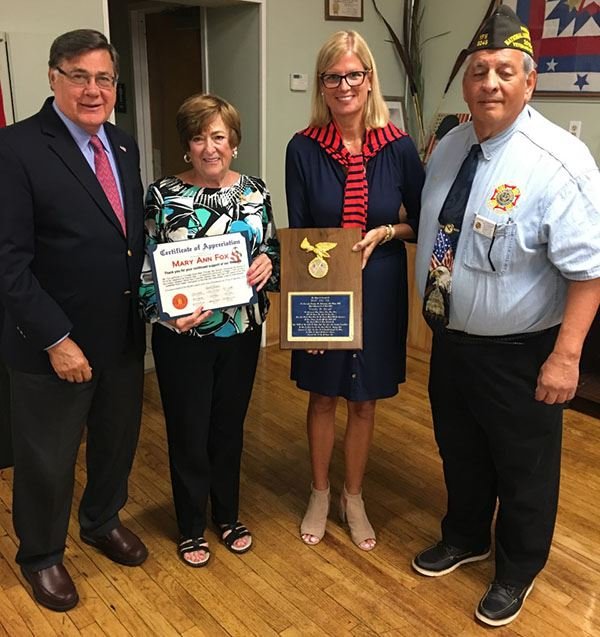 Mary Ann Fox set out to record the stories of as many aging veterans who lived in her Ridge retirement community as possible. She gave herself a deadline to complete the book within a year. She achieved that goal, collecting 63 interviews from veterans from World War II, the Korean War, the Cold War era and the Vietnam War.

Fox distributed copies of her self-published 112-page book titled “Proudly We Serve,” to the Veterans featured inside and to local libraries, preserving their sometimes painful memories of war forever.

On Wednesday, September 4th, Supervisor Ed Romaine and Councilwoman Jane Bonner visited VFW Fischer/Hewins Post 6249 in Rocky Point where they recognized Fox, for her creative output. At the VFW hall, Fox was joined by several veterans who contributed stories in the book for a presentation.

“Mary Ann is such a great patriot who has made a commitment to keep the stories of sacrifice, courage and honor alive for future generations,” said Councilwoman Bonner in a statement after the presentation. “She reminds us how so many lives have been changed for the better because of what they did in every corner of the globe.