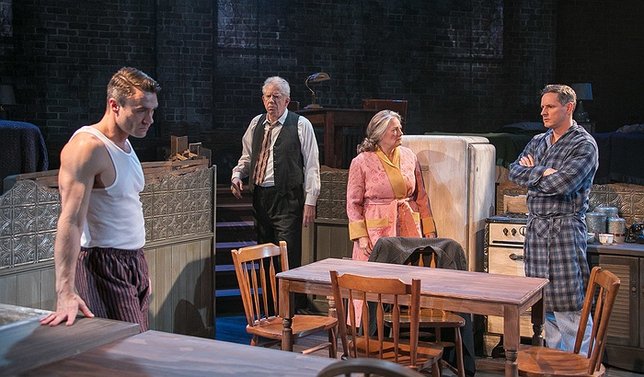 Literature Live! 2017 Production of Death of a Salesman.

Sag Harbor, NY - August 21, 2018 - Bay Street Theater & Sag Harbor Center for the Arts is pleased to announce the tenth year of the Literature Live! program. This year’s Literature Live! production will be F. Scott Fitzgerald’s The Great Gatsby, adapted for the stage by Simon Levy. Public performances are Thursday through Saturday, November 8 – 10, 15 – 17, and Thanksgiving weekend November 23 - 25. Tickets are on sale now and available online at baystreet.org, or by calling the Box Office at 631-725-9500. Private school group performances are Monday through Friday, November 5 - 25. To book a school group, contact mary@baystreet.org.
Joe Minutillo will direct the production.  He has previously directed the Literature Live! productions of The Diary of Anne Frank, To Kill A Mockingbird, Of Mice and Men, The Scarlet Letter, and last year’s Death of a Salesman.
F. Scott Fitzgerald’s classic Jazz Age novel, The Great Gatsby, will come to life on Bay Street’s intimate stage. The Roaring 20’s was a time of excess, lavish parties and speakeasies. Jay Gatsby was a secretive and successful kingpin of the elite party circuit, but he had one burning desire and one purpose - to be with Daisy Buchanan, the love of his life from his youth. Set on Long Island in 1922, this compelling drama portrays the human condition of ambition, love, lust, greed, deceit, and most of all, the struggles of class and the American Dream.
Joe Minutillo is excited to be back at Bay Street directing The Great Gatsby and to be working with an incredibly creative production team. This will mark Joe’s 6th time directing one of Bay Street Theater’s Literature Live! productions.  His past shows include Diary of A Young Girl Anne Frank, To Kill A Mockingbird, Of Mice and Men, The Scarlet Letter (an original piece Joe co-wrote with Scott Eck), and last year’s Death Of A Salesman.  This past year he has directed The Lion King Jr., The Little Mermaid Jr., and A Christmas Story at The Gateway Performing Arts Center of Suffolk County. He continues to teach workshops around the state, direct for the Young American Writers Project at Stony Brook, and teach at the Gateway Acting School. Joe is a founding member of the NYSTEA (New York State Theatrical Education Association) and received the “Rod Marriot Award” for Theatre Education in the State of New York. Joe has dedicated much of his career in Theatre Education and believes in NYSTEA’s mantra that “Theatre Transform Young Lives”. Joe, as always, thanks the support of his wife Luci, and his children, Gregory, Megan, and Schulyer.
Literature Live! is sponsored by Century Arts Foundation, The Andrew Sabin Family Foundation, Susan Dusenberry, Susan Edwards & Ian Ziskin, Dana Foundation, Jane Holden, In Memory of Sloane Shelton, Irvin Stern Foundation, The Moxie Foundation, Mary Lou & Sal Ranieri, Nancy Stearns, Theatre Venture, Inc., and Town of Southampton.
Media sponsors are Dan’s Papers, WBAZ, WEHM, WLNG.
The Box Office is currently open daily from 11 am - showtime. After September 2, the Box Office will be open Tuesday - Saturday 11 am - 5 pm. To purchase tickets, call the Box Office at 631-725-9500 or order online at baystreet.org.
Bay Street Theater & Sag Harbor Center for the Arts is a year-round, not-for-profit professional theater and community cultural center which endeavors to innovate, educate, and entertain a diverse community through the practice of the performing arts. It serves as a social and cultural gathering place, an educational resource, and a home for a community of artists.