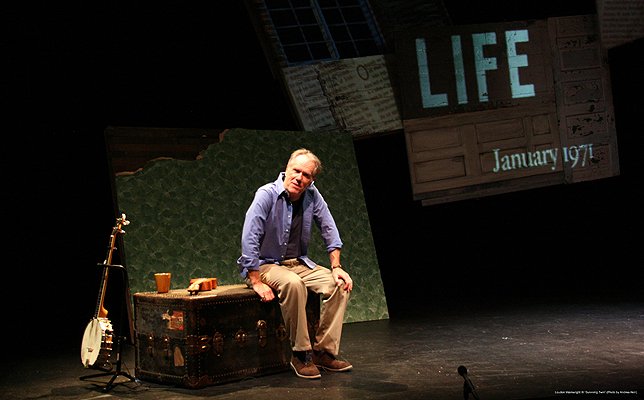 Sag Harbor, NY - August 4, 2017 - Bay Street Theater & Sag Harbor Center for the Arts is pleased to announce “Surviving Twin”, presented by Loudon Wainwright III on Friday, September 15 and Saturday, September 16 at 8 pm. Tickets range from $35 to $55 and are available online at www.baystreet.org or by calling the Bay Street Theater Box Office at 631-725-9500, open Monday through Saturday 11 am to showtime.
Surviving Twin is a one-man theatrical hybrid of pulp, picture, and song starring Loudon Wainwright III. A solo piece many years in the making, Surviving Twin is what the singer-songwriter calls a “posthumous collaboration” with his writer father. Part concert, part dramatic reading, part family slide-show, it is a hybrid theatrical form consisting mainly of songs written by Loudon III, along with readings of magazine columns written by his late father, Loudon Jr., and photographs that span four generations of the Wainwright clan.
Loudon Wainwright III (b. 1946) is a singer- songwriter and actor. He has recorded over 26 albums including the 2010 Grammy Award winning High, Wide, & Handsome. As an actor he has appeared on TV (M.A.S.H., Ally Mc- Beal, Undeclared), in movies (Big Fish, The Aviator, Knocked Up), on Broad­way (Pump Boys & Dinettes), and off Off-Broadway (Hot Lunch Apostles). Critic Stephen Holden of The New York Times, “[Loudon III] wrings more truth out of his contradiction than any other songwriter of his generation.”
Bay Street Theater & Sag Harbor Center for the Arts is a year-round, not-for-profit professional theater and community cultural center which endeavors to innovate, educate, and entertain a diverse community through the practice of the performing arts. We serve as a social and cultural gathering place, an educational resource, and a home for a community of artists.