On August 12th, 2015, at 6:30 PM, the Greater Port Jefferson-Northern Brookhaven Arts Council proudly announces that the acclaimed roots and rockabilly band Gene Casey & The Lone Sharks will be appearing at the Picnic ... 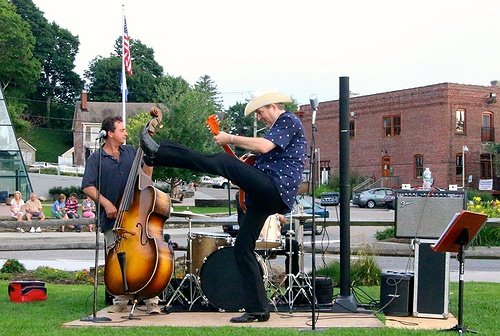 During this concert, the Long Island Music Hall of Fame will be presenting Gene Casey the LISA (Long Island Sound Award) in recognition of Gene’s outstanding contributions to Long Island’s musical landscape.

About Gene Casey & The Lone Sharks:
Together since 1988, GENE CASEY & The LONE SHARKS have been mainstays on the East End scene for years. They are the favorite band of many who frequent the legendary Stephen Talkhouse, the annual Shelter Island beach party, and the “secret” barge and boat flotilla in the waters off Sag Harbor. In recent years, the Lone Sharks have been venturing further west, much to the delight of their legion of rockabilly and swing dance fans. GENE CASEY & The LONE SHARKS dance along the edge where jazz and country meet that old-time rock-and-roll, and they invite everyone along for the ride.

The band has performed at New York landmarks such as the Bottom Line, the Waldorf Astoria's ballroom, and aboard the USS Intrepid. Several of Gene's roots-drenched songs have been used on the soundtrack to television and feature films, including Justified and Sons of Anarchy on FX; the 2012 thriller The Tall Man starring Jessica Biel, and 2013's The Killing Season starring Robert DeNiro.

Gene Casey (singer and guitarist out of NY's latter-day punk/ new wave scene) cuts a very impressive figure: at six-foot-five, armed with a tasty array of elegant guitar leads, presented on a twangy red Gretsch, he is a musician’s musician, very well-respected on the scene. Rock-steady drummer Chris Ripley came to the fold, with a classic swing feel that characterized the band's next phase. The driving doghouse bass of Tony Palumbo brings that big bass sound to the band's increasingly swinging style.

In the course of maintaining their status as "Best of the Best" (as proclaimed by both Dan's Papers and Hamptons Magazine) the Lone Sharks have shared billing and/or backed-up NRBQ, rockabilly legends Link Wray, Sleepy LaBeef and Bill Kirchen, Rock and Roll Hall of Fame superstar Wanda Jackson, the Who's John Entwistle, The Highway QCs, East End roots singer Caroline Doctorow, and - on one unforgettable night - Tiny Tim.

Gene and the band’s all-original CD “Untrained” has been getting lots of acclaim and radio airplay. Celebrating the roots of contemporary Americana with 12 original songs that evoke the romantic sweep of 60s pop, classic C&W and the raw untamed spirit of early rock & roll, they’ve created the most authentic sound this side of Memphis, tight and real and a whole lotta fun!

About the Concert Series:
Since 2009, these concerts have been a very welcome addition for the community. The very popular and talented performers appeal to all ages, and these concerts are FREE to the public.

Concertgoers are encouraged to bring a picnic supper and their own blankets or lawn chairs. This is a terrific way to connect with neighbors, and make new friends while enjoying wonderful music and spectacular sunsets over Port Jefferson Harbor. A small playground is adjacent to the concert area, so parents can enjoy the music while amusing the little ones who cannot sit still.

The concerts are rain or shine: the Village of Port Jeff allows us to move indoors at the PJ Village Center if the weather threatens. Please bring your chairs indoors, but unfortunately dogs are not permitted inside the PJVC.

The GPJAC thanks the Village of Port Jefferson Department of Parks and Recreation for the kind use of this jewel of a park.