Nassau County’s place in aviation history continues to be celebrated. 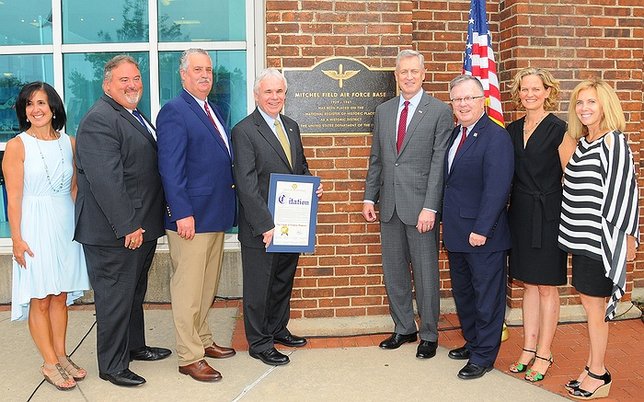 Nassau County Executive Laura Curran joined with local politicians and civic leaders to recognize that the Mitchel Air Base and Flight Line has been listed on the National Register of Historic Places.

Garden City, NY - July 31, 2018 - Nassau County Executive Laura Curran joined with U.S. Congressman Peter King, NYS Assemblyman Charles Lavine, NYS Assemblyman Michael Montesano, Town of Hempstead Supervisor Laura Gillen, Presiding Officer Richard Nicolello, Legislator Ellen Birnbaum, Legislator Thomas McKevitt, Legislator Deborah Mulé, NYS Parks Regional Director Wayne Horsley, Nassau County Community College President Dr. Hubert Keen, Cradle of Aviation Museum Executive Director Andrew Parton, and Director of Museum Operations Gary Monti to recognize that the Mitchel Air Base and Flight Line has been listed on the National Register of Historic Places. This National Register designation was accomplished through the efforts of the Cradle of Aviation Museum’s Curatorial Division.
“We are proud that Nassau County’s Mitchel Air Base and Flight Line has been added to the National Register of Historic Places.” said County Executive Curran. “This recognition serves as a reminder of the instrumental role that Nassau County has played in aviation and military history.”
“I am incredibly proud to see the Mitchel Air Base and Flight Line receive a designation on the National Register of Historic Places,” said Congresswoman Kathleen Rice. “For nearly a century, Long Island played a vital role in our nation’s aviation industry, and today is an incredible opportunity to celebrate our community’s prominent place in American history.”
“The history of Long Island and the history of aviation are intrinsically entwined. Our aviation and aerospace industries have a proud tradition here on Long Island, which continues to evolve and grow,” said Congressman Suozzi. “I am pleased to see the Mitchel Air Base and Flight Line receive designation on the National Register of Historic Places, and commend Nassau County, the Town of Hempstead, and the Cradle of Aviation for their efforts to preserve an important piece of Long Island’s history.”
Mitchel Air Base and Flight Line is nationally significant in military history for its role as the premier and most critical military air base and air field on the east coast during the first half of the twentieth century. Mitchel Air Base was also home of the Headquarters of the First Air Force, the Air Force’s Northeast District, and the Air Force Reserve and maintained fighter wing to protect New York City’s airspace. While Mitchel Field’s historic extent remains evident on the landscape, only its core 108 acres remains intact to its historic appearance. Historically, Mitchel Field’s 1,117 acres were dominated by land used for flying fields, runways, and taxiways, located south of the air base.
After the United States entered World War I in 1917, the government purchased a large portion of the Hempstead Plains to establish two, hastily constructed airfields: Roosevelt Field and Mitchel Field. In the years after the war, Mitchel Field became a hub of aviation activity on Long Island. Several air races were held at the field, which became the site of broken speed records and innovations in aviation technology. Though the field remains important in aviation history for these early accomplishments, its built environment reflects its formalization into the east coast’s most important air base in the decades before World War II.
In 1928, the military began a multi-year campaign to make Mitchel Field a permanent base. By 1932, Mitchel sported new hangars, a military housing complex, and typical base amenities. After becoming a permanent military base, the tradition of innovation continued; in 1938, Mitchel was the starting point for the first transcontinental non-stop flight by Army B-18 bombers.
After the onset of World War II, the military population at the base expanded dramatically. As the key Army Air Force installation in the Northeast, Mitchel Field played a critical role during World War II and the Cold War. As the home to the Headquarters of the First Air Force, the Northeast District, and the Air Force Reserve, all aspects of strategy, defense, research, and the training of new aviators were directed from Mitchel Field.
Mitchel Field was the most important Air Base on the east coast of the United States during the first half of the twentieth century. The west side of the flight line remains largely intact. The firehouse and three of the five hangars remain, as well as two hangar maintenance buildings, which were used for aircraft assembly and housed machine shops. The maintenance hangars were originally longer than the regular hangars; in 1941, the latter were expanded and “bomb-proof” ceilings were added to all hangars.
These structures composed the flight line, where all aerial operations began. While all of these buildings have been repurposed for new uses, their original form, materials, and association with each other remain evident.