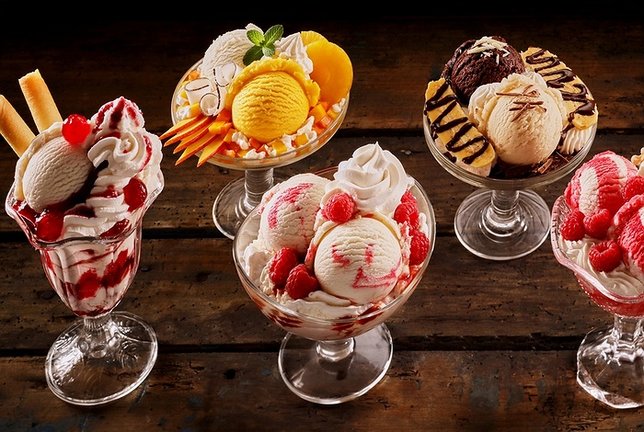 July 21 is National Ice Cream Day! It’s a real thing –in 1984 President Ronald Reagan designated that the third Sunday in July would be National Ice Cream Day. In honor of this deliciously special day, we’ve compiled a list of some of the best ice cream parlors on Long Island. Whether you crave a classic sundae with a cherry on top or have a taste for something unique, we’re pretty sure these places have got you covered. What’s your favorite ice cream shop? Give us the scoop in the comments.

Krisch’s has been a Massapequa staple since 1955. While Krisch's is renowned for its homemade ice cream, famous sundaes and extra creamy shakes, the restaurant also has a complete breakfast, lunch and dinner menu.  If you’re feeling up to it – and you have an empty stomach – you can take the Krisch’s Kitchen Sink Challenge. Eat 10 scoops of ice cream with the works in one hour or less and it’s on the house, plus you get your picture on the “Wall of Fame.”

The founders of Let’s Roll were inspired by hand rolled Thai ice cream and brought the concept to Merrick for us Long Islanders to enjoy.  The Let’s Roll website describes its hand rolled ice cream treats as “your favorite dessert with a twist.”  Customers pick an ice cream, frozen yogurt or non-dairy base and choose a flavor to be added into the base. The dessert is then frozen at -20 degrees and rolled into cups. Customers can add an unlimited amount of toppings. Each dessert is $7 total, tax included.

With old-fashioned booths and songs from the 50s and 60s in the background, Coyle’s makes enjoying ice cream a nostalgic trip back in time. Coyle’s has been around since 1985 and offers 60 flavors of ice cream all which are hand made on the premises. Some of its specialty sundaes include the “Fire Islander,” “Mamma K’s PB&J” and “Heavenly Ash.” Coyle’s also makes specialty and made-to-order cakes, as well as ice cream sodas, shakes, floats and classic Brooklyn Egg Creams which were voted the best on Long Island.

Ice cream and your favorite breakfast cereals unite at Spoons. Signature Spoons desserts are made with ice cream, traditional toppings like chocolate drizzle plus cereals such as Cookie Crisp, Reese’s Puffs, Cinnamon Toast Crunch and many others. Breakfast cereals were never like this!

Founded in Massachusetts, Herrell’s in Huntington is a family-owned and operated ice cream store. All the ice cream is made on the premises using fresh ingredients and there are more than 300 flavors to choose from. Vegan options are available.