The initiative provides comprehensive support through the naturalization process. 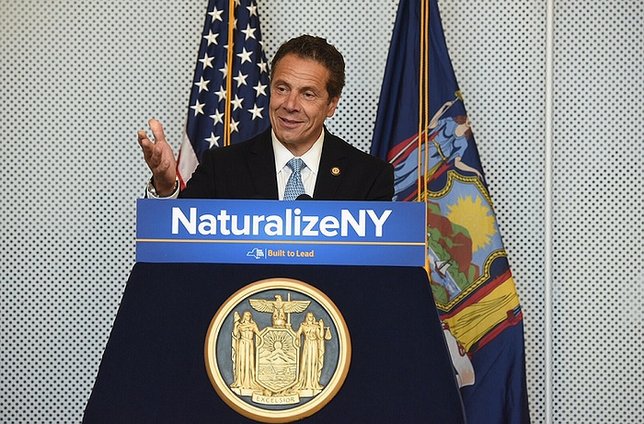 “We are a nation of immigrants, and New York believes that diversity is our greatest asset,” Governor Cuomo said. “Amid the fervor of national debate, today we are sending a clear message – that we welcome you with open arms to join our community and grow with our economy. Ensuring greater access to the information, tools and resources needed to apply for citizenship is vital to delivering on this promise, and we are proud to point the nation the way forward in getting it done.”

Assembly Speaker Carl Heastie said, “There are countless hardworking immigrants in New York that dream of becoming American citizens, but for many the process is too costly and difficult to navigate. By offering guidance through the naturalization process and covering the nearly $700 application fee for some 2,000 immigrants that earn too much to qualify for a fee waiver, we will improve outcomes for individuals and expand their opportunities to make meaningful contributions to our state and nation. The Assembly Majority remains a fierce advocate for our immigrant population and has continually pushed for legislation that increases their opportunities, including the DREAM Act. During a time when our nation is overwhelmed by anti-immigration rhetoric, New York should and will remain a progressive leader in ensuring that the American Dream is not out of reach for anyone.”

Senate Democratic Leader Andrea Stewart-Cousins said, “New York is the ‘Empire State’ because we have a proud tradition of welcoming new Americans and providing them with the opportunity to achieve the American Dream. The Senate Democrats have helped lead the fight to reduce burdens placed on our state’s newest residents because we understand that the key to economic success is unleashing the potential of all New Yorkers. I commend Governor Cuomo on his efforts to ease immigrants’ path towards citizenship and look forward to continuing our joint efforts to build a stronger, fairer and more welcoming New York State.”

NaturalizeNY boosts awareness of the naturalization process by providing comprehensive citizenship assistance, and includes a lottery for 2,000 naturalization application fee vouchers for eligible low-income working immigrants. The New York Daily News, which runs the annual program "Daily News/CUNY Citizenship NOW!,” and offers thousands of immigrants in New York City free immigration advice, will assist with the selection of the first round of recipients in September.

In addition to expanding opportunity for New Yorkers, NaturalizeNY will also provide a boost to the state’s economy. The 2015 study conducted by the Urban Institute found that, on average, there is an increase of 8.9 percent in earnings for immigrants who become citizens. The increased earnings lead to higher tax payments and lower reliance on public benefits. For New York City, this would mean that if all eligible immigrants become citizens there would be an increase in tax revenues of $789 million, which, along with a decrease in benefits use, would yield a net benefit to New York of $823 million.

Citizenship Assistance
As a central component of NaturalizeNY, the State will host Citizenship and Naturalization Legal Clinics at its 27 Opportunity Centers across New York. At no cost to the prospective applicant, each Legal Clinic will provide:

Additional naturalization assistance services will be coordinated with experienced community partners throughout the state and online services. A locator for Opportunity Centers is available here.

Lottery for Application Fee Voucher
According to the U.S. Census, there are 915,000 people in New York State who hold a green card and are eligible for citizenship – including approximately 654,720 in New York City. The federal application fee for any individual is currently $680 and is expected to rise later this year.

To support 2,000 prospective applicants, New York State, the Robin Hood Foundation and the New York Community Trust are investing more than $1.25 million to cover the fee assistance vouchers. The funding will be paid directly to the federal government by the campaign partners and will cover the full cost of the required naturalization process. Vouchers will be distributed over the next 12 months, and will be administered by personnel from SUNY Albany, Stanford University, and George Mason University.

To apply: Applicants whose household income falls between $30,240 and $60,480 are encouraged to apply. Registration opens today and closes September 23. Prospective applicants can determine their eligibility for citizenship and their eligibility for the lottery by visiting www.NaturalizeNY.org; additional information is available by calling the New Americans Hotline at 1-800-566-7636.
Senator Adriano Espaillat said, “New York State has a long and triumphant history as a melting pot where people come from all over the world to pursue the American dream. The burden of an application fee forces a heartbreaking choice for too many immigrants between money they cannot spare and their dreams of citizenship. By providing assistance in the naturalization process, this new partnership gives eligible immigrants the helping hand they need. With NaturalizeNY, Governor Cuomo leads the nation in easing the path to citizenship.”

Senator Brad Hoylman said, “I applaud Governor Cuomo for this innovative immigration initiative. NaturalizeNY brings private and public partners together to provide critical assistance to deserving immigrants in the naturalization process. In New York State, we know that immigrants are key contributors to the economy and our communities. This partnership removes many previously insurmountable barriers, ensuring a clearer path for thousands of immigrants.”

Assemblyman Francisco Moya said, “Our immigrants are a vital part of this state’s economy, but too often, they face costly and burdensome naturalization barriers that prevent them from fully becoming American citizens. During my time in the legislature, I have focused on finding ways the state can help alleviate the problems facing immigrants. With this new program, we are taking a major step towards giving them the financial support now so that they can participate in our community and our economy later on. This Naturalize NY initiative sends the message loud and clear that in New York we will continue our vision to create a bright, vibrant and diverse future for this state and I thank Governor Cuomo for paving the way forward.”

Assemblywoman Linda B. Rosenthal said, "We must make it easier, not harder for people to pursue legal pathways to citizenship. Recognizing this truth, the Governor is taking a bold step that will help thousands of people realize their dream of American citizenship. More cities should follow New York's lead."

New York Daily News Editor-in-Chief Jim Rich said, "What the governor's office is proposing here is fantastic. The Daily News is proud to be a part of this important program. So many hardworking people deserve this opportunity and we are thrilled to be a part of making it the dream a reality."

New York Secretary of State Rossana Rosado said, “Becoming a U.S. citizen is the culmination of a dream for countless immigrants. But the cost of becoming one often leaves this dream out of the reach of many. NaturalizeNY will help thousands of immigrants become American citizens.”

Laura Gonzalez-Murphy, Director, New York State Office for New Americans said, “The New York State Office for New Americans and its Opportunity Center network look forward to using its resources to assist our State’s vast immigrant community become part of the family of New York. We want to thank our partners in this endeavor for their commitment to bringing this opportunity to those who wish to fulfill their American dream.”

Steven Choi, Executive Director of the New York Immigration Coalition said, "We commend the Governor's efforts to make the process of naturalization easier for eligible immigrants, who as citizens will be able to fully participate in civic life. With close to a million New Yorkers who are eligible for citizenship, it is essential that the State helps pave the way for them to become citizens. One of the biggest barriers for our communities remains the high fees associated with naturalization; through the NaturalizeNY lottery, we are happy to know that low-income citizenship-eligible immigrants will receive the necessary financial support to tackle the final hurdle to receiving all the benefits of U.S citizenship."

Veyom Bahl, Managing Director of Survival Programs for the Robin Hood Foundation said, “We are proud to support this effort to help low-income, working immigrant families become citizens. Immigration status offers a direct line to upward mobility and stability, so efforts like these are critical for our poverty-fighting mission.”

Shawn Morehead, Program Director for Education and Human Justice at The New York Community Trust said, “The City’s immigrants are a vital part of the City’s civic and economic life. As the City’s community foundation, we are committed to making New York a great place to live, work, and play for all our residents, and therefore are pleased to help New Yorkers overcome the financial and other burdens of applying for citizenship.”

Hispanic Federation President José Calderón said, “Hispanic Federation applauds Governor Cuomo and the Office for New Americans for unveiling NaturalizeNY, a program that will be immensely beneficial for all New Yorkers, particularly those in immigrant communities. High costs should not be a barrier to naturalization; instead, it is in the State’s, and indeed the country’s, best interest to alleviate these economic burdens. Hispanic Federation's Office of New Americans Opportunity Centers will continue to serve as resource hubs for immigrants throughout the state, and we welcome the expansion of services offered within these centers.”

Professor David Laitin of Stanford University said, “We are pleased to participate in this program, and support the registration of applicants for U.S. citizenship. We expect this program to change lives.”

Jo-Ann Yoo, Executive Director, Asian American Federation said, “The Office for New Americans is investing real dollars into immigrant communities to help people forge a path to citizenship. By partnering with the Asian American Federation to create an Opportunity Center, for example, Office for New Americans is helping us to provide critical ESOL and naturalization legal services to the South Asian and Muslim communities of central Brooklyn, who would otherwise have no access to in-language, culturally responsive services to allow them to integrate into the larger New York community. This program is creating new citizens and new voters who will be empowered to participate fully in all aspects of our civic life.”

In 2011, his first year in office, Governor Cuomo issued Executive Order 26, requiring State agencies that provide direct public services to offer free interpretation and translation services to members of the public for vital forms and instructions. Under the leadership of Governor Cuomo, New York State also:

Most recently, Governor Cuomo launched the Task Force to End Worker Exploitation and the Nail Salon Industry Enforcement Task Force to ensure that workers are being treated fairly and for business owners to better understand their rights and responsibilities.

Becoming a U.S. Citizen
The federal government only grants U.S. citizenship to immigrants with lawful status after the individual fulfills the requirements established by Congress. The process of becoming a citizen, referred to as naturalization, generally includes an extensive application to the federal government, submission of fingerprints to be used for a criminal background check by the Federal Bureau of Investigation, passing a language and civics exam, and an interview with a federal immigration officer. After this process, an immigrant is not yet a U.S. citizen until after the individual takes the Oath of Allegiance at a citizenship ceremony.