Participants bravely rappelled down the side of the 150-foot tall administrative tower at Garden City’s Nassau Community College to support a great cause. 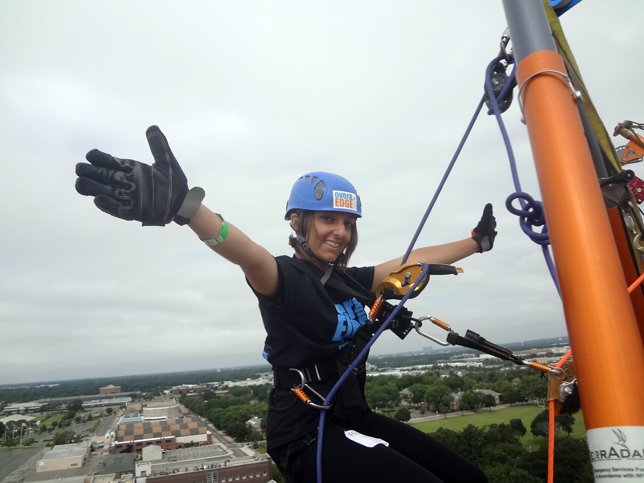 Felicia Brunner of Holbrook getting ready to go "Over The Edge" to support EAC Network.

Garden City, NY – June 5, 2017 – As the old saying goes, many people might be willing to “go out on a limb” to support a great cause, but how many would be willing to say they’d be willing to literally go over the edge – of an actual building, that is – as well? The fearless participants at EAC Network’s first annual “Over The Edge” event – which saw supporters actually rappelling down the side of a 12-story building – were able to answer that question with a resounding “yes.”
Sarah Muller is a Developing and Marketing Assistant at EAC Network, a non-profit social services organization based out of Hempstead that specializes in the wide variety of services aimed at assisting underprivileged members of the community. 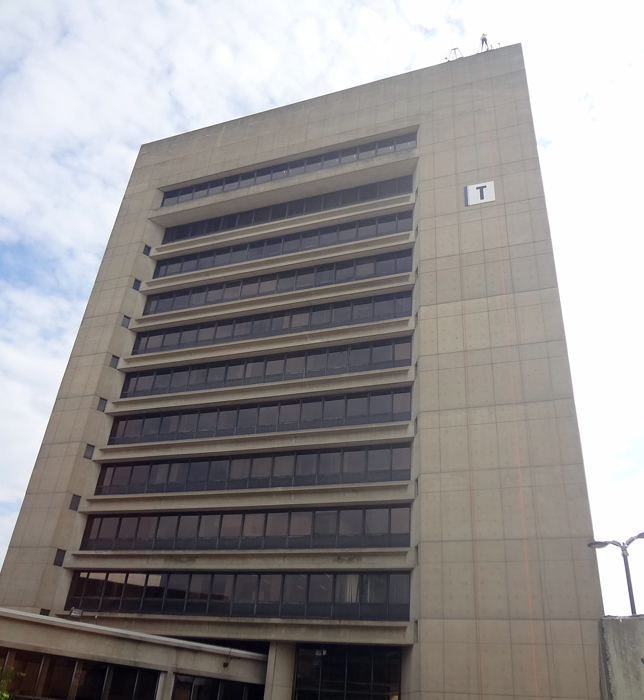 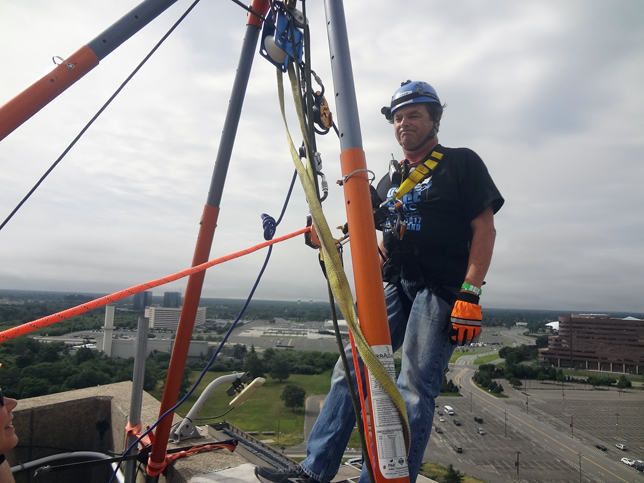 An EAC Network supporter getting ready to rappel down the side of the12-story building. Photo Credit: Chris Boyle
“There are many non-profits here on Long Island, and they're all doing a great job, but how do you distinguish yourself and break out and find some new people who want to get involved with your organization?” Muller asked. “So we decided to do something different, and that's Over The Edge. We're hoping to attract some young people, business owners, whoever we can by doing something new and exciting.” 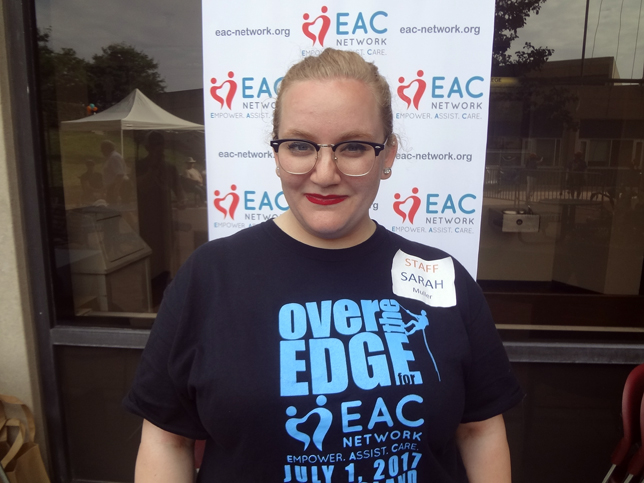 Sarah Muller is a Developing and Marketing Assistant at EAC Network. Photo Credit: Chris Boyle
Over The Edge isn't just the name of the event itself; it's also the name of a for-profit events management company whose specialty is what they call the “urban building rappel.” According to company rep Todd Medeiros, Over The Edge works almost exclusively with non-profit groups looking to raise funds to continue their important civic work. 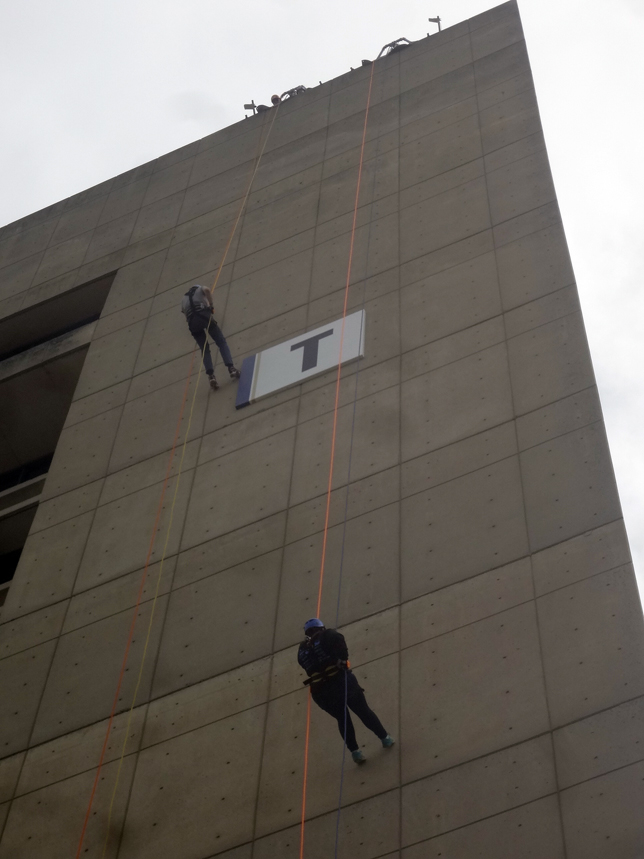 This year's inaugural "Over The Edge" event was held on Friday, June 30th and Saturday July 1st. Photo Credit: Chris Boyle
“Organizations will hire us to come out and bring all of the technical equipment, along with the requisite insurance and things of that nature. We set up a rappel on a building in a three-way partnership between us, the building partner, and the non-profit client,” he said. “We come in and set up the building repel, and then the non-profit client – who is EAC Network here today – has their supporters go out and solicit sponsorship, and they raise money for the opportunity to come and rappel down the side of the building.” 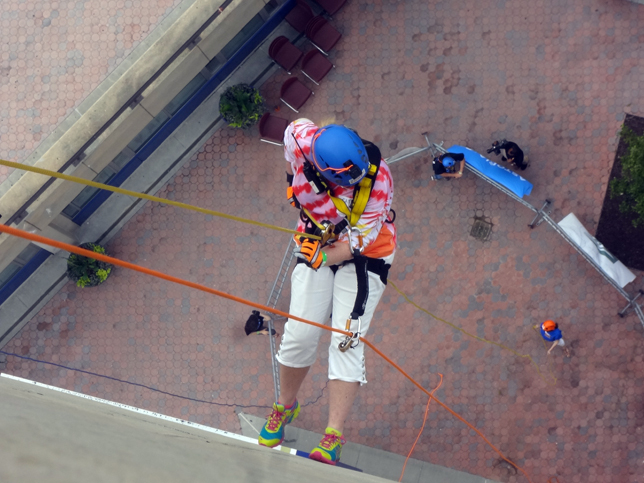 One of the brave souls willing to go rappel down the side of the Nassau Community College administrative tower was Cathy Stanton of Bethpage. Photo Credit: Chris Boyle
This year's inaugural event was held on Friday, June 30th and Saturday, July 1st, with the first day of the event being a VIP and media-only day; the second day was open to the general public, and attracted approximately 60 people willing to actually climb over the side of a building and slowly work their way down to the ground level via a complex series of pulleys, harnesses, and high-tensile ropes. 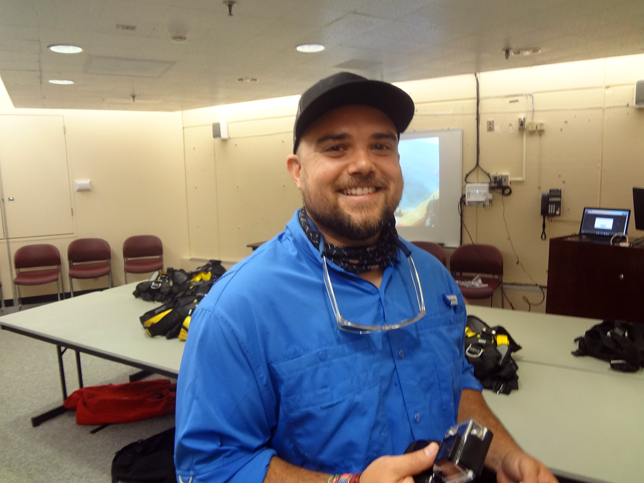 Todd Medeiros of events management company Over The Edge. Photo Credit: Chris Boyle
Speaking of equipment, one thing Over The Edge is known for is their strict adherence to safety standards and ensuring that participants are adequately trained before getting anywhere near the ledge of a building, according to Medeiros. 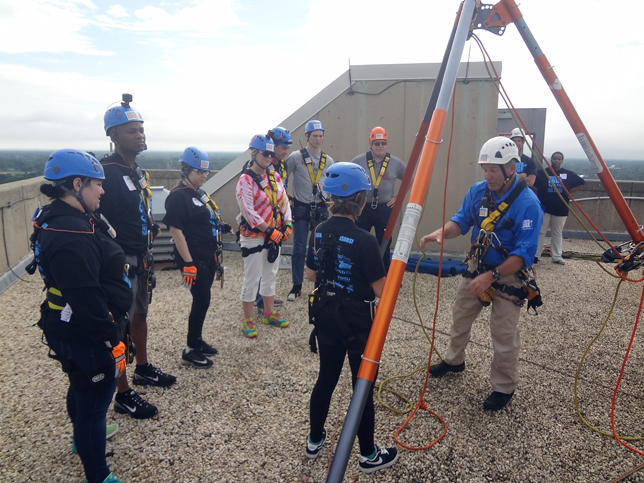 Once participants are dressed and safety checked, they proceed to training. Photo Credit: Chris Boyle
“First, the participant registers with our non-profit client, and then they're brought into the staging room where they get all of the equipment that they'll need. Once they're dressed and safety checked, they'll proceed to the next station which is training,” he said. “They get to be familiarized with the gear and learn the signals that we have to teach them. After that there's another safety check, and after that they ultimately go to the edge, where they are assisted by our certified technicians. Then they will finally do the rappel, after yet another safety check.” 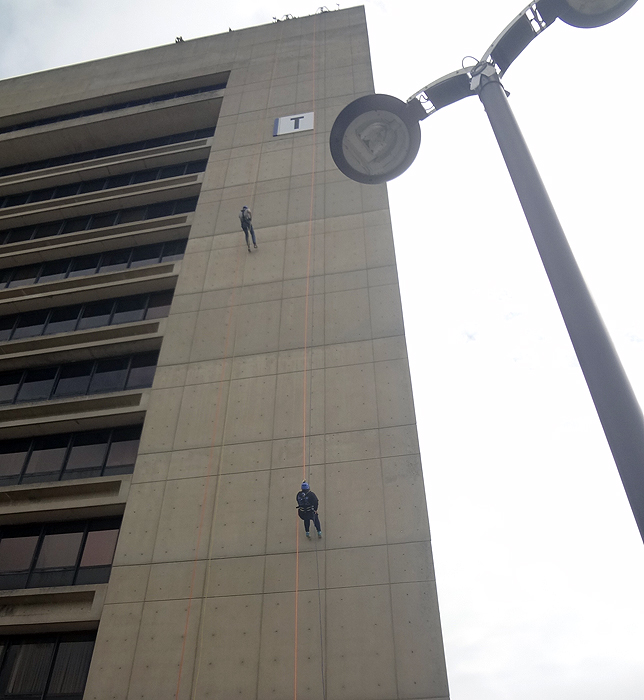 The event drew approximately 60 people who worked their way down the building to the ground level via a complex series of pulleys, harnesses, and high-tensile ropes. Photo Credit: Chris Boyle
One of the brave souls willing to go through with making like Spider-Man down the side of the Nassau Community College administrative tower on Saturday was Cathy Stanton of Bethpage; although noticeably terrified at the very thought of doing so, she nonetheless bravely pushed on with the rappel, saying that it was worth it for such a good cause. 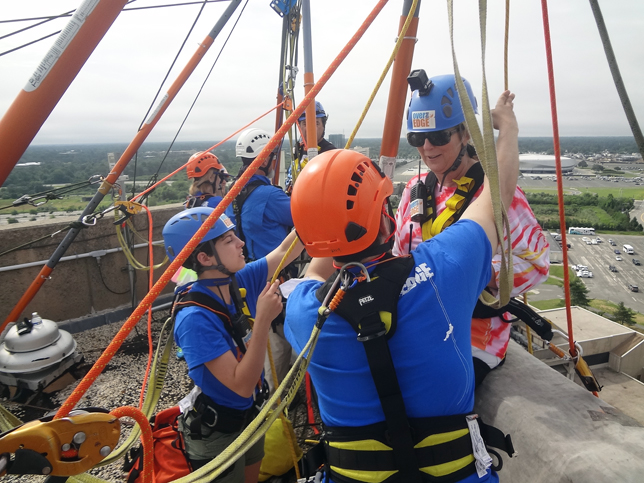 Cathy Stanton of Bethpage getting a last-second safety check. Photo Credit: Chris Boyle
“The EAC Network has so many great programs for seniors, for children at risk, for parents at risk,” she said. “I'm very nervous right now, but compared to what other people have to go through, this is nothing. I want to support the EAC and make sure that they have the ability to support my community.”
After successfully making her decent to the ground safe and sound, Stanton appeared overjoyed; not only because she was still alive, but also because she had gone above and beyond in the pursuit of her civic duty.
“I did it! I can't believe that I did it,” she said. “It was amazing, it was fantastic…I don't know if I'd do it again anytime soon, but it was a once-in-a-lifetime experience and I'm glad that I did it, and that I did it for such a worthy cause.” 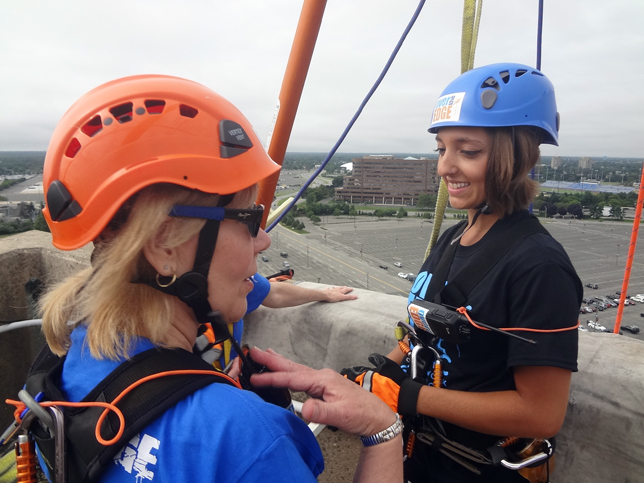 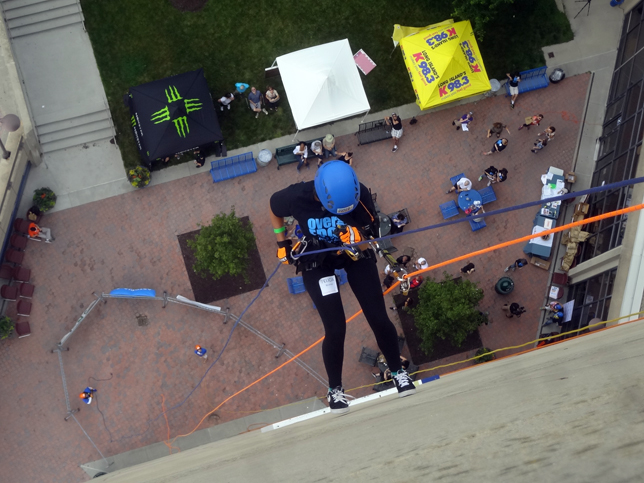 Felicia Brunner of Holbrook well on her way to a safe arrival 150 below. Photo Credit: Chris Boyle
After successfully getting to the bottom of the building without a hitch, Brenner said that the experience was one-of-a-kind and something she would love to do again in the future... especially when it comes to helping out a charitable organization like EAC Network.
“It was terrifying to jump off, but it's definitely exhilarating to go down,” she said. “It's terrifying, but it's definitely a lot of fun and I would totally do it again.”