Kaminsky, Local Officials Host Forum with Army Corps of Engineers and NYSDEC about Future of Our Beaches

Army Corps and NYSDEC presented their plan for the future of the Barrier Island beaches, including storm resiliency and hardening initiatives. 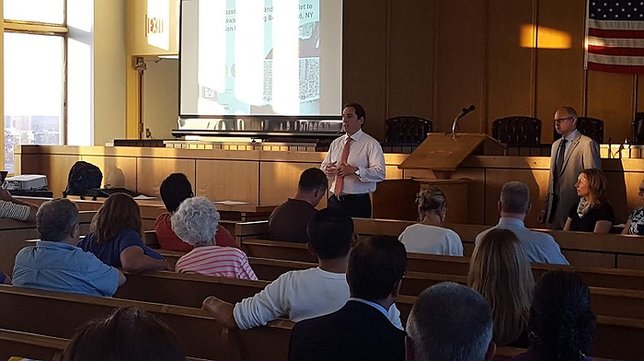 Over 200 residents turned out for the event to voice their concerns over how the project will impact the beaches and roads.

Long Beach, NY - June 30, 2016 - Senator Todd Kaminsky, along with the Office of Rep. Kathleen Rice, Nassau County Legislator Denise Ford, and the City of Long Beach hosted an informational forum last night, where the U.S. Army Corps of Engineers (Army Corps) and NYS Department of Environmental Conservation (NYSDEC) presented their plan for the future of the Barrier Island beaches, including storm resiliency and hardening initiatives.

“Ensuring that the South Shore’s beaches are prepared for severe storms is crucial to maintaining the quality of life and economy of the Barrier Island,” said Senator Kaminsky.  “Community participation and awareness are critical to the making sure the project is completed responsibly, and I am pleased that the public has the opportunity to weigh in and get answers to their concerns.”

“As we continue to recover from Superstorm Sandy and prepare for future storms, it's critical that we make smart resiliency investments now that will better protect communities on the Barrier Island," said Representative Kathleen Rice.  “I'm grateful to the Army Corps and NYSDEC for coming to our district to discuss their plans and talk with residents about how the projects will affect their lives, and I look forward to continue gathering input from community members and stakeholders moving forward.”

“I appreciate the update but I feel very strongly that more discussion is necessary as this will impact the whole Barrier Island.” Legislator Ford

“The Army Corps project is long overdue, and it will help ensure that we have a stronger, smarter, and safer beach,” said City Manager Jack Schnirman.  “It is extremely important to the city council that the entire process be transparent and that the community is involved every step of the way, and that is why this forum took place in City Hall.”

On Tuesday evening, Senator Kaminsky partnered with the Point Lookout Civic Association to host the Army Corps and NYSDEC for a similar presentation.  Over 200 residents turned out for the event to voice their concerns over how the project will impact the beaches and roads.