Suozzi: “Demolition of Northport VA Buildings 1 and 2 to Begin by End of June”

After years of advocating, Suozzi’s efforts to take down derelict buildings are finally coming to fruition. 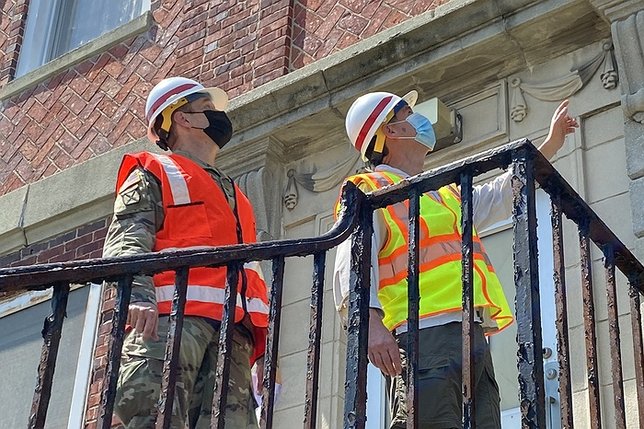 Photo by: Office of Congressman Suozzi

Congressman Tom Suozzi (D-Long Island, Queens) met with Colonel Matthew Luzzatto, Army Corps of Engineers’ New York District Commander and District Engineer, at the Northport VA to announce that the demolition of buildings of 1 and 2 will begin by the end of the June.
The current buildings stand as a stark example of Northport’s aging infrastructure and are an eyesore that misrepresents the care veterans deserve
“After years of advocating, these derelict buildings are finally coming down,” said Suozzi. “This is a huge victory for the Northport VA and our veterans and is something that I have been prioritizing since I came to Congress in 2017. When you pull into the Northport VA, the first things you see are these two decaying and decrepit buildings. But at the end of the month, that will be no more.”
Suozzi who has worked with the Department of Veterans Affairs to demolish the structures since his election in 2017, has said the dilapidated buildings — which are surrounded by hazard fencing because of the risk of falling debris — sends the wrong message to the public about how the facility cares for its veterans. That’s why since coming to Congress, Suozzi has worked to improve the image and quality of care at the Northport VA.
The demolition of these two decaying buildings, which are the first structures one sees upon entering the Northport campus, will yield much-needed parking for the facility which cares for more than 30,000 veterans a year.