Mangano Announces Bipartisan Support For A Path To Pay-Go 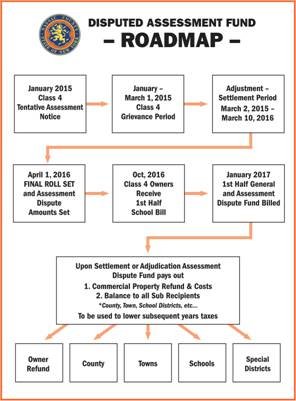 Nassau County, NY - June 13, 2014 - Nassau County Executive Edward P. Mangano, Presiding Officer Norma Gonsalves and Minority Leader Kevan Abrahams today called on the New York State Legislature to pass a pilot program to establish an escrow fund for commercial property tax challenges. On Monday, the Nassau County Legislature is expected to pass a home rule message in support of state legislation sponsored by Senator Kemp Hannon (S.7705) to permit Nassau County to establish a Disputed Assessment Fund with respect to commercial property tax challenges. This escrow-type fund, in conjunction with the residential settlement program, will end Nassau County’s need to borrow to pay property tax refunds.
County Executive Mangano stated, “This legislation, in conjunction with the residential settlement program, transitions our County entirely to a ‘pay go’ tax refund system by creating an escrow fund to pay claims and eliminate Nassau’s 30-year reliance on borrowing to pay property tax refunds.”
Historically, Nassau County has paid out approximately $80 million annually in commercial property tax refunds and has borrowed approximately $1 billion over the last 10 years to pay mostly commercial refunds. This legislation provides the County with the ability to set aside dedicated funds in escrow until the owner’s dispute is settled or adjudicated. This bill, in conjunction with the present residential settlement program, accomplishes the following:
“It has taken a long time for us to perfect this legislation and I believe this is the best way to stop accruing refund debt and finally reform Nassau’s assessment system,” said Presiding Officer of the Nassau County Legislature Norma Gonsalves. “I urge Albany to prioritize this item on both the Senate’s and the Assembly’s agendas before the end of their session.”
Minority Leader for the Nassau County Legislature Kevan Abrahams stated, “We have been working cooperatively with County Executive Mangano and it has always been our goal to find a way to pay 'tax cert' refunds without incurring additional public debt. I’m glad to stand here today with the members of the Democratic caucus and I anticipate its passage on Monday.”
Facts about the Nassau County Assessment System: