Legislation raises the legal minimum age for the purchase of tobacco products to 21. 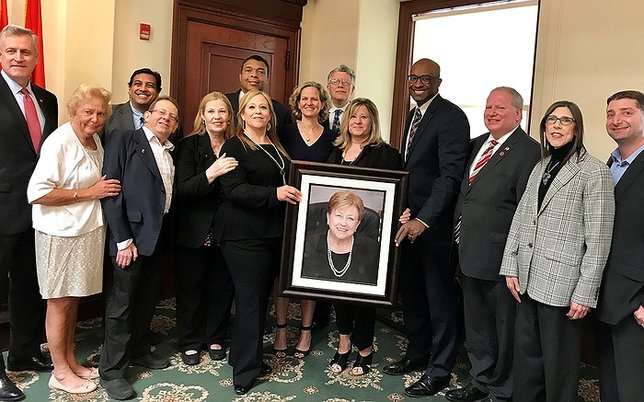 Nassau County Executive Laura Curran signed the Tobacco 21 Legislation which raises the legal minimum age for the purchase of tobacco products to 21.

Nassau County, NY - June 6, 2018 - Nassau County Executive Laura Curran today joined with Presiding Officer Richard Nicolello, Legislator Arnold Drucker, members of the Nassau County Legislature, health professionals, and family members of former Legislator Judy Jacobs, for the signing of the Tobacco 21 Legislation which raising the legal minimum age for the purchase of tobacco products to 21. The bill was originally introduced by the late Legislator Judy Jacobs, and this year was supported by all 19 members of the legislature.
“I am proud to be signing this ‘Tobacco 21 Legislation,’ in the name of the late Legislator Judy Jacobs,” said County Executive Laura Curran. “This legislation is more important than ever with the rising tobacco and nicotine trends among our youth—whether it is cigarettes, e-cigarettes, or vaping pens, this legislation can keep carcinogens out of young people’s hands and lungs, and hopefully save lives.”
“Cigarette smoking is the number one cause of preventable death in the United States, and those who do not start smoking by the age of 21 are much less likely to ever start. Prohibiting the sale of tobacco and vaping products to people under the age of 21 is an important step in protecting the health and well-being of Nassau residents,” said Presiding Officer Richard Nicolello.
“By enacting ‘Tobacco 21’ legislation, Nassau County has taken a life-saving step toward deterring young people from dangerous, addictive tobacco and nicotine products, Minority Leader Kevan Abrahams (D – Freeport) said. “We are particularly grateful for the foresight and compassion of the late Judy Jacobs, whose leadership on this issue was a major factor in bringing us to this momentous occasion.”
"As the successor to Judy Jacobs, of blessed memory, who served the residents of Nassau County with honor and distinction for so many years, I am extremely proud to witness this historic day in Nassau County in which this measure, which was first introduced by Judy, has finally become law, immediately resulting in the saving of lives by possibly preventing countless teenagers from picking up this dangerous habit and virtually guaranteeing themselves a lifetime of poor health, addiction, inordinate expense, and a loss of the ability to enjoy life to its fullest” said Legislator Arnold Drucker.
According to the American Cancer Society almost 2,500 children under 18 years of age try their first cigarette and more than 400 of them will become new, regular daily smokers. Half of them will ultimately die from their habit, and people who start smoking at an early age are more likely to develop a severe addiction to nicotine than those who start at a later age. Of adolescents who have smoked at least 100 cigarettes in their lifetime, most of them report that they would like to quit, but are not able to do so. If current tobacco use patterns persist, an estimated 5.6 million of today’s youth under age 18 eventually will die prematurely from a smoking-related disease. Cigarette smoking during childhood and adolescence causes significant health problems among young people, including an increase in the number and severity of respiratory illnesses, decreased physical fitness and potential effects on lung growth and function. Among adults who have ever smoked daily, 87 percent had tried their first cigarette by the time they were 18 years of age, and 95 percent had by age 21.