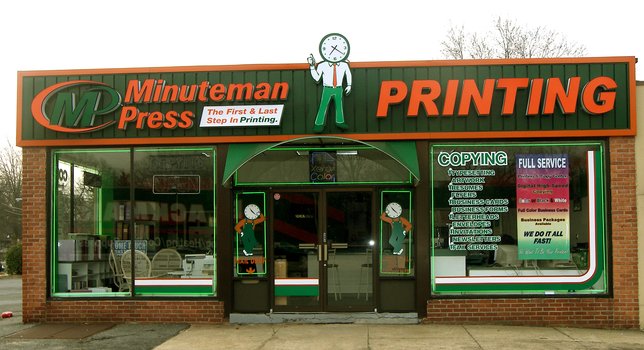 Farmingdale, NY - June 16th, 2014 - Like evolution in the natural world, those companies which adapt to the ever-changing business environment thrive. Those that can’t, don’t. That would have been a typical quote from Roy Titus, the founder of Minuteman Press, according to his grandson Nick Titus, who is now a Vice President with the company.

Minuteman Press launched in 1973 after Roy Titus and his son Bob opened their first center in Plainview New York.

Minuteman Press has thoroughly adapted to the 21st Century’s digital environment. The family-owned company is thriving today in the business-to-business sector with more than 920 franchises worldwide having embraced the notion that printing is not limited to paper.

The business took off and the Titus family soon had three stores on Long Island.  Franchising began in 1975. An agreement with 3M for supplies and equipment allowed the company to do color work which set them apart from others in those days. Nick Titus entered the family business after graduating university in 2007. It’s a family affair with Nick’s Uncle Gary serving as Senior Vice President and Sister Jackie working in the accounting department.

“My first job was working with the owners on Long Island,” shared Nick. “Marketing in any business is the key to success so I naturally began to gravitate towards helping those franchisees with that aspect. It turns out I liked it, saw results and eventually got into the marketing part of the business on a national level.”

“Many clients want their logos on pens, mugs and other promotional products – a service Minuteman has embraced, as part of the company’s evolution from printing to helping customers with overall brand development,” says Nick Titus.

Brand development for small and mid-size businesses has been going on for years, but has really taken off thanks to promotional products. Minuteman Press – which is ranked first among printing industry franchises in Entrepreneur magazine’s “Franchise 500” list for 2014 – encourages franchise owners to offer promotional items to their customers and has negotiated contracts with suppliers to help keep the prices low, Jutt says.

The company also conducts Internet marketing of promotional products, and has incorporated them onto a “consumer” page at both the corporate website (shop.minutemanpress.com) and individual store sites.

“Because of the addition of promotional products, we believe we stand a very good chance of growing our entire business over the next five years by 50 percent,” Jutt says.

Moreover, because Minuteman Press already has clients’ logos on file and an understanding of their needs, Jutt adds the company can do “cross-media applications” – building simplified websites, making movies and posting them to video hosting sites like YouTube, or even creating a rolling PowerPoint presentation that clients can loop on TV monitors.

“With the advent of digital technology and communications tools, we can do anything to help make their businesses grow,” says Jutt, whom Roy Titus hired as a 19-year-old pressman in 1974.

Titus says the changes wrought by digital print technology “have really done nothing but help us” because Minuteman Press franchisees can do more work with less overhead and staff. Thanks to that development, the company can service clients of all sizes, he adds.

From its origin in suburban Long Island, Minuteman has expanded throughout the English-speaking world. Its first franchise outside the United States opened in Toronto, Canada, in 1982. Today, Minuteman Press is also serving customers in the United Kingdom, Australia and South Africa.

New franchise owners are flown to the corporate office in Farmingdale, N.Y., for a two-week training program that covers marketing and selling of services, setting pricing and how to use Minuteman Press’ proprietary management and pricing software.

The company developed its own CRM program rather than buying off-the-shelf software because “we can customize it exactly the way we want to see things and the way our franchise owners want to see things,” Titus says. “It’s incredibly in-depth.”

“We’ve always taken the approach of never saying no to a customer,” Titus says, adding that even if a particular store hasn’t done what a customer wants, “with almost a thousand franchises in the system, there’s always somebody somewhere who has done what you’re looking to do.”

Pictured Below: The Titus Family: Gary, Nick, Bob and Jacqueline.