LI's Celebrity Diva Is At It Again - Chef Gail Chandler is On the Scene Cuisine - A Cake Lady!

Celebrity Chef Gail Chandler , today announced, that she has deployed a high-end SCV (Suburban Culinary Vehicle) called On the Scene Cuisine to cater awesome parties in your driveway. 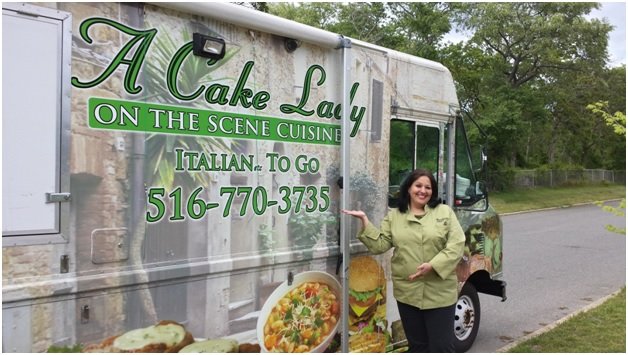 Jericho, NY - May 29th, 2013 -  Celebrity Chef Gail Chandler, today announced, that she has deployed a high-end SCV (Suburban Culinary Vehicle) called On the Scene Cuisine to cater awesome parties in your driveway - so you can Party Fabulous in your own backyard..  The $220,000 Executive Kitchen is the most technologically advanced mobile kitchen on Long Island.  Chef Gail has developed a reputation on Long Island as the “Go To” chef that delivers exquisite and exotic Italian dishes, served with Long Island Flair.  From the Hideaways in the Hamptons, to Freeport’s beautiful Woodcleft Canal , Executive Chef Gail has catered to the best  party goers anywhere. (AND- even makes a spectacular cake for the occasion. Wow!)

On the Scene Cuisine has catered some of Long Island’s biggest outdoor events, and is a regular fixture at some of the biggest private parties from Oyster Bay to the Hamptons and up to Scarsdale & New Rochelle.  “I have been eating Chef Gail’s food for years.” stated Christopher Basile, one of Chef Gail’s lucky neighbors.  “I used to tell my parents I wasn’t hungry, and then sneak down the block to get some Chicken Picatta or whatever was cookin’ that day.  There was always a plate waiting.”  While the invention of the Italian Egg Roll is a Hugh hit, “On the Scene Cuisine” also offers BBQ, Personal Chef Services, Specialty Cakes for all Occasions, and fun foods with sophisticated taste.

While the food is rich in old world flavor wrapped in Italian countryside seasonings and spices, the food is only half the reason to visit On the Scene Cuisine.  “On the Scene Cuisine is a big truck and Chef Gail IS an even bigger personality.  She make everyone laugh, and brings five star food at affordable prices. I’m following her public dates.”  Noted Michael LeFleur of Old Bethpage.

With a new reality TV Show in the works, Chef Gail is busy, but makes the time to give back to the community.  After Superstorm Sandy, On the Scene Cuisine has been spotted in Island Park, Long Beach, Amityville, Freeport, Hicksville, and other stricken communities offering free food and drinks to anyone passing by, feeding volunteers, and sending home meals for elders.  So, along with the big truck and big personality, Long Island’s Diva Celebrity Chef Gail Chandler is a talent, and has a big heart, too.

If you're in need of a chef that can really rock a party - anytime, anywhere on Long Island, please contact Chef Gail at 516-770-3735. For upcoming public events, please visit ChefGails.com.