Penn Station to the Hamptons in 95 Minutes Is the Fastest Ride to the East End. 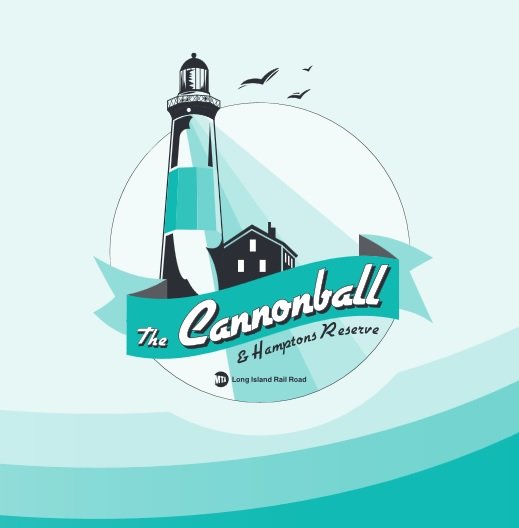 Hamptons Reserve Service on the Cannonball features a reserved seat and a wait staff to pamper you for an extra charge. Seats on the 10 remaining coach cars are still available and tickets are being sold on a first-come, first-served basis. In either case, customers are advised to buy tickets in advance since on-board fares are higher and lines at the machines can be long.  After last year’s introduction of Cannonball service at Penn Station (it previously left from Hunterspoint Ave. in Queens) Hampton Reserve ridership on the express train more than doubled.
“There is no better way to reach the Hamptons on a Friday afternoon than via the LIRR’s express, nonstop Cannonball service,” said LIRR President Pat Nowakowski. “In 95 minutes, we will get you from Penn Station to Westhampton so you can start your weekend early. As we kick off the summer season, you can avoid the traffic and parking hassles by using the LIRR to reach the East End. We will have plenty of service to get you there.”
Cannonball (East) Hamptons Reserve Ticket - $47.00
Through Labor Day, the Cannonball (East) departs every Friday (except on Thursday, July 3 rather than Friday, July 4) afternoon at 4:06 from Penn Station and travels non-stop to Westhampton arriving 5:41 p.m., followed by stops at Southampton (6:03 p.m.), Bridgehampton (6:13 p.m.), East Hampton (6:25 p.m.) and Montauk (6:48 p.m.) Hamptons Reserve seating on the Friday Cannonball is priced at $47 when purchased in advance or $54 on-board the train with limited availability. Regular Cannonball East tickets are priced at $27 in advance and $33 on-board.
Cannonball (West) Hamptons Reserve Ticket - $39.75
The Cannonball (West) – a Sunday evening express train – will also make its seasonal debut this weekend and there are plenty of seats available in both Hampton Reserve and regular coach cars. The Cannonball (West) brings weekenders back from Montauk and other East End locales to Penn Station. This train departs Montauk at 6:37 p.m. with stops at East Hampton (7:01 p.m.), Bridgehampton (7:10 p.m.), Southampton 7:20 (p.m.), Hampton Bays (7:31 p.m.) and Westhampton (7:39 p.m.), before running non-stop run to and Jamaica Station and on to Penn.  Hamptons Reserve Service West - $39.75 with an advance reservation or $47 on-board the train with very limited availability. Regular Cannonball West tickets are priced at $19.75 in advance or $26 on-board.
Hamptons Reserve Service
At Penn Station, Hamptons Reserve customers will board the first two cars of the 12 car train. The double-deckers are fully air conditioned with comfortable 2x2 seating on each level. Seat reservations must be made in advance and customers can make seasonal and weekly reservations for Hampton Service.
The LIRR Cannonball has a long history of service to the East End and was first introduced as an express train that operated between Long Island City and Southampton in the 1890s. Today, it is the only named train operated by the MTA and it makes the longest run covering a distance of 117 miles from Manhattan to Montauk.

For More Information
For the latest information on the LIRR Cannonball and Hamptons Reserve Service as well as the entire schedule of LIRR trains to Montauk, go to the MTA LIRR website. Customers can also call 511, the State Travel Information Line and say: Long Island Rail Road, say “More Options” at the LIRR opening greeting, then say “Hamptons Reserve.”  The deaf or hard of hearing can use their preferred relay service provider for the free 711 relay to reach the LIRR at 511.