Nothing says the start of summer quite like the Jones Beach Air Show, kicking off this holiday weekend 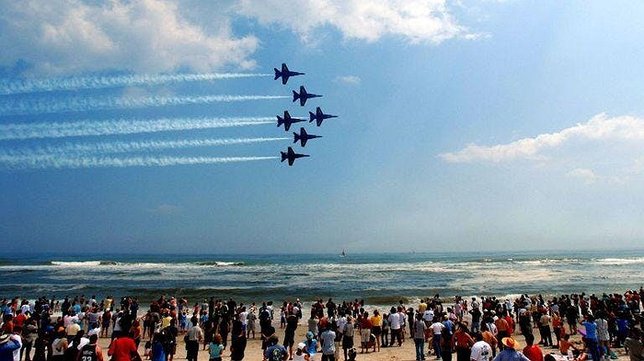 This weekend marks the 16th Annual Bethpage Air Show at Jones Beach. The weekend-long event kicks off on Saturday Saturday, May 25, and Sunday, May 26, from 10 a.m. to 3 p.m. But get there early parking fills up quickly so make sure to get there early. The show will feature high-flying action stunts and incredible performances in the sky.

Last year's show was cancelled on Saturday, but still had a great turnout on Sunday. There were 207,000 people at the show—more than either Saturday or Sunday in 2017. And if the weather holds out through the weekend, crowds will be just as big this year.

As of now, the weather is expected to be perfect for the air show. The National Weather Service is predicting Saturday to be partly cloudy with a high of 69, and Sunday to be mostly sunny with a high of 74. There may be some showers Saturday night, but hopefully nothing that would impact the show.

The show will take place on Saturday, May 25 and Sunday, May 26 from 10 a.m. to 3 p.m. each day. Entry to the show is free, but parking is $10 per car. And with hundreds of thousands of people attending, parking lots can fill up quickly — sometimes by 11 a.m. When that happens, the roads are closed off and people are turned away. So if you want to get a space, make sure to get the beach early.

The Blue Angels are not scheduled to appear this year, but the U.S. Airforce Thunderbirds will be there to wow audiences. They will be joined by a flyover of the FA-18 Superhornet, the U.S. Coast Guard and the Golden Knights parachute team. There will also be performances from many civilian aircraft and groups. Check out these important tips:

For more information on the Bethpage Air Show, click here.