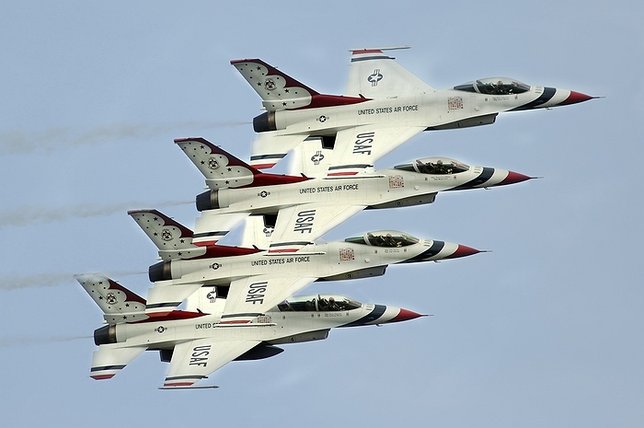 Bethpage, NY - January 17, 2019 - Bethpage Federal Credit Union, New York State’s largest credit union, and the New York State Office of Parks, Recreation and Historic Preservation, are very pleased to announce that the United States Air Force Thunderbirds will headline the 16th Annual Bethpage Air Show at Jones Beach taking place on Saturday, May 25, 2019 and Sunday, May 26, 2019.
It was also announced at the annual International Council of Air Shows (ICAS) Convention that the United States Army Golden Knights Parachute Team will be participating in the 2019 lineup, as will Lt. Col. John Klatt, the GEICO Skytypers, the 106th Air Rescue Wing and Sean Tucker, who after retiring his solo performance last season, will be debuting his new, non-solo performance.
An additional announcement was also made that the Bethpage Air Show at Jones Beach, one of the largest and most respected air shows in the country which is ranked in the Top 5 by industry experts, was named one of six air shows to be featured in the second annual 2019 “Grunt Style Air Show Majors Tour.” The tour unites the most prestigious air shows in the country and was developed to help increase mainstream awareness of the air show industry.
This will be the U.S. Air Force Thunderbirds’ 7th appearance as headliners at the show.  During the squadron’s most recent headlining appearance in 2017, over 347,000 attended the Bethpage Air Show at Jones Beach.
“We are thrilled to welcome back the United States Air Force Thunderbirds to Long Island.  This year we will be celebrating our 16th anniversary. Since the show began in 2004, millions of air show enthusiasts have traveled near and far to help celebrate our nation’s military and the Memorial Day holiday weekend. We look forward to another spectacular show this May,” said George Gorman, Deputy Regional Director, New York State Office of Parks, Recreation and Historic Preservation.
“Last year, the Bethpage Air Show was named one of the most respected air shows in the country and this year again, will be included among the best in the U.S.,” said Linda Armyn, Senior Vice President of Corporate Affairs, Bethpage. “If you haven’t gotten to see the show yet, I strongly encourage you to go! It’s a remarkable show and a wonderful beach event to spend with family and friends on Memorial Day Weekend.”