Nsikak Anietie Ekong of Boy Scout Troop 300 was honored by Mayor Don Ryan and the Board of Trustees. 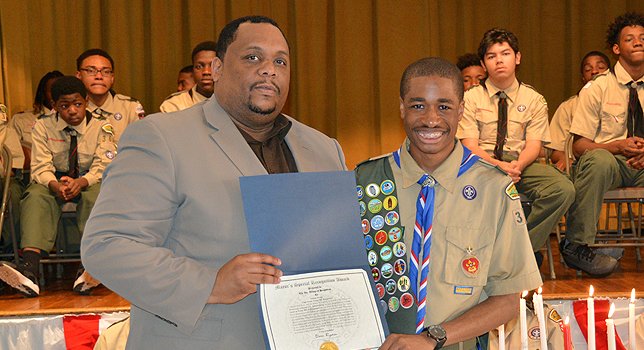 Photo by: Village of Hempstead

Hempstead, NY - May 16, 2017 - Village of Hempstead Mayor Don Ryan and the Board of Trustees recently congratulated Village resident and Boy Scout Troop 300 scout Nsikak Anietie Ekong’s completion of the Boy Scouts program and designation as an Eagle Scout.
Eagle Scout is the highest rank attainable in the Boy Scouts, recognizing young men of considerable distinction, discipline, leadership and service.
The Village, Legislators Kevan Abrahams and Celia Bynoe and the Nassau County District Attorney each officially honored Ekong for his achievement. The Village of Hempstead is proud of Ekong for his accomplishment and his work as a role model for local youth.
For more information about the Village of Hempstead, visit http://www.villageofhempstead.org.