Ellen - a community leader, entrepreneur, and mom - accepted the award at a Senate ceremony in Albany. 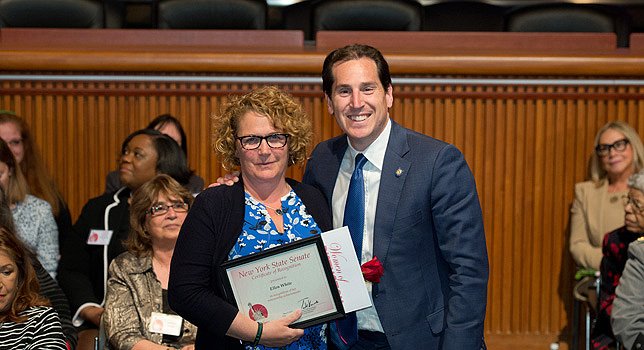 Albany, NY - May 11, 2017 – Today, Senator Todd Kaminsky was proud to honor Rockville Centre resident Ellen White as one of the 2017 NYS Senate’s “Women of Distinction” for her work using art to support children with developmental disabilities. She has helped write and produce South Side High School's annual Centre Stage play, and co-founded BackYard Players & Friends - an inclusive arts based program designed to enhance the social and interpersonal skills for teens and young adults.
"I was proud to nominate Ellen - who has been an amazing resource for children with developmental disabilities - as a 2017 ‘Woman of Distinction,’” said Senator Todd Kaminsky. “Through projects such as the Centre Stage Program, BackYard Players & Friends, or many others she leads, Ellen has used art to create vibrant and all-inclusive communities that support those with developmental disabilities. Her passion for helping others is obvious to anyone who meets her, and she sets an inspirational example we should all follow.”
“What a great honor to have been selected by Senator Todd Kaminsky as a Woman of Distinction for 2017, said Ellen White. “ It was very humbling to sit in an audience of such accomplished women on the 150th anniversary of the Suffrage movement. To walk through the hallways of the Capital and sit in on the Senate while current legislation was being passed, it was especially moving when Senator Kaminsky stood on the Senate floor and spoke passionately about passing a bill to protect our Police Officers and First Responders. My husband Chris is a retired Lieutenant with the NYPD and my sons Timothy and Ryan currently serve as NYPD officers. It was wonderful to be in there when the Bill passed as it had such personal meaning to me and my family.”
Ellen accepted the award during a ceremony in Albany yesterday evening. The NYS Senate Women of Distinction program was created to recognize New York women who exemplify personal excellence, courage, selflessness, integrity and perseverance.
BackYard Players & Friends offers community enrichment programs in a loving and supportive environment. This year, the organizations was honored at the Rockville Centre St. Patrick’s Day Parade.
Ellen White’s biography is below.
As a community leader, entrepreneur, and mom, Ellen White has been an amazing resource for children with developmental disabilities on the South Shore. With dedication, compassion and humor, Ellen has created inclusive and fun communities for all, and is a role model to many.
Ellen is the creative force behind South Side High School's successful Centre Stage Program. Centre Stage pairs special-education and general-education students to perform an entertaining show each year. Since its founding, Ellen has helped write, direct and produce the all-inclusive play, which has grown to a cast of over 100 students who perform for almost 2,000 people, becoming a popular collaborative community.
It was through Ellen's experience with Centre Stage that BackYard Players & Friends (BYP & Friends) was born. As students graduate, many experience a decline in their social interactions and community involvement. So she co-founded BYP & Friends - an inclusive arts based program designed to enhance the social and interpersonal skills for teens and young adults - with her sisters Joan Kelly and Christine Daly. Offering community enrichment programs in a loving and supportive environment is at the core of BYP & Friends.
Ellen is currently building an outdoor creative playspace called "Mary's BackYard," pulling together different community groups to design and build this beautiful, interactive space that will include elements of music, art, science, literature and theatre. The goal of "Mary's BackYard" is to create positive and meaningful experiences for the community at large, as inclusion inspires people to work together and learn from each other.
Ellen’s credentials don’t end with wildly popular arts programs. Ellen, whose sons all played lacrosse, has also served as President of Rockville Centre Lacrosse and founded the girls lacrosse program.
Ellen has lived in Rockville Centre for over 20 years. She is married to Chris White and has four sons: Tim, Christopher, Ryan, and Terence.