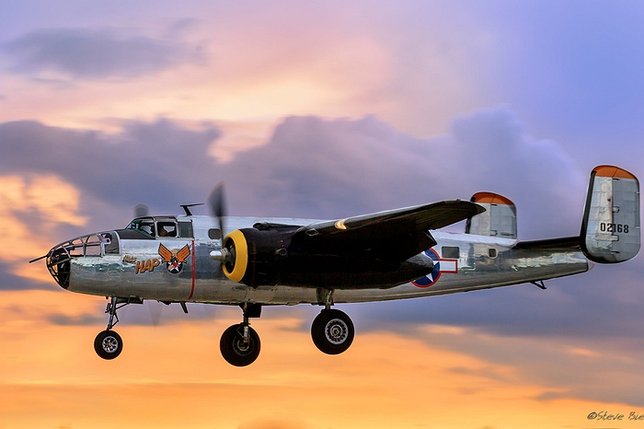 Memorial Day Weekend is when we honor our fallen Veterans, the sacrifices made by active duty military and those retired from service.  In observance of Memorial Day Weekend, American Airpower Museum (AAM) continues their historic participation in the Jones Beach Air Show, flying their fabled "Arsenal of Democracy" warbirds over Jones Beach on Saturday, May 29th and Sunday, May 30th!  AAM’s fleet of iconic and meticulously restored military aircraft will include a B-25 Mitchell Bomber, Douglas C-47 Skytrain troop transporter, Grumman TBM Avenger Torpedo Bomber, Curtiss P-40 Flying Tiger, P-51D Mustang Fighter, AT-6 Texan Warbird and AT28D5 Nomad Vietnam Era Fighter.
On May 29th and May 30th, Hangar 3 opens at 10:00 a.m. Arrive there early, park your car, sign in and enjoy the exhibits.  During the morning, you’ll be called outside to watch our pilots start their engines, taxi and lift off, performing exciting flybys with Republic Air Traffic Control permission, before leaving to join the Jones Beach Air Show.  Have lunch and later on watch as our aircraft return from Jones Beach in the afternoon, touch down and taxi back to Hangar 3. Flight experiences also available each day on AAM’s AT-6 Texan and Waco Biplane!
AAM also welcomes three visiting U.S. Navy EF/A-18 Super Hornets from May 27th through May 30th. The Hornets are supersonic combat jets, designed as both fighters and attack aircraft.  Exclusive to AAM, Hornets are not in the Jones Beach Air Show and will be on AAM’s ramp all four days.  Be there early a.m. as the Hornets touch down at Republic on Thursday, May 27th.   Hornets are scheduled to depart on May 31st or June 1st.   AAM’s WWII aircraft will also have practice fly days Thursday and Friday in the a.m. and p.m.
According to AAM founder Jeff Clyman, the goal for this four-day salute is two-fold: “To honor the men and women of the ‘Greatest Generation’ who built, maintained and piloted the iconic warbirds of yesteryear in a bold defense of freedom during World War II, as well as active duty military, national guard and reservists who continue this mission and command the skies in advanced supersonic jet aircraft to our present day.”
Since everyone can’t be at Jones Beach on Saturday and Sunday, Jeff Clyman decided to stage this four-day salute so folks on the beach, as well as those closer to home, can enjoy AAM’s warbirds.  So, if you want to avoid the Wantagh Parkway crawl to Jones Beach, you can park instead for FREE in AAM’s lot and along New Highway!  Bring the family, hang out with us all day, and watch exciting warbirds in action each day!
One other note. The Air Show features a U.S. Air Force A-10 Thunderbolt II, “The Warthog,” flying over Jones Beach.  AAM has its very own A-10, our nation’s premier close air support attack aircraft and it’s on display outside Hangar 3, with staff ready to answer your questions about its special features and armaments!
Admission for Adults is $15, Seniors & Veterans $10 and Children 5-12 $8.  Tickets and pre-registration is not required and admission is on a first-come-first-serve basis.  The Museum can now operate at 100% capacity, in accordance with New York’s May 19th lifting of pandemic capacity limits.  However, there is still a need for social distancing and guests must wear face masks plus have temperatures taken at the door.  Hours are 10:00 a.m. to 5:00 p.m. on all four days, plus AAM is open Monday, May 31st, Memorial Day. Don’t miss this one!
The American Airpower Museum is an aviation museum located on the landmarked former site of Republic Aviation at Republic Airport, Farmingdale, NY. The Museum maintains a collection of aviation artifacts and an array of aircraft spanning the many years of the aircraft factory's history. The Museum is a 501(c)(3) Nonprofit Educational Foundation Chartered by the New York State Board of Regents.