Trotta: "I commend these young women and their coaches for their hard work and dedication in attaining this goal." 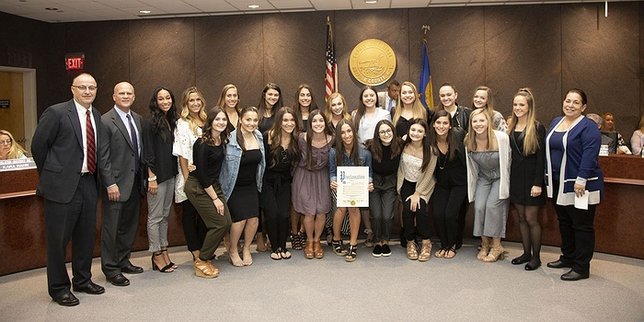 Smithtown, NY - May 1, 2018 - At a recent meeting of the Suffolk County Legislature, Legislators Leslie Kennedy and Rob Trotta introduced Smithtown East Varsity Kickline Team, known as the Whisperettes, and congratulated them and their coaches Sarabeth Cook and Michele Marciante, as well as Smithtown Athletic Director Patrick Smith, for winning their 20th consecutive national championship at the Small High Kick Division at the National Dance Association Contest of Champions in Orlando, Florida. The team also won Best in Category in the High Kick Division and came in second in the Medium High Kick Division.
“I commend these young women and their coaches for their hard work and dedication in attaining this goal. Through their determination and dancing skills, they won the title for the 20thyear in a row making their school and everyone in Smithtown very proud of them,” said Suffolk Legislator Rob Trotta.
Legislator Robert Trotta represents the 13th Legislative District, and serves on the Legislature’s Economic Development, Parks & Recreation and Veterans Committees.