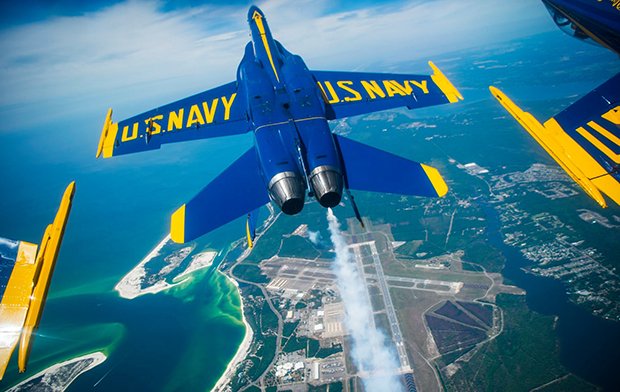 Watch a video of the flyover by clicking here.

According to a statement on the Blue Angels Facebook page, a formation of six F-16C/D Fighting Falcon and six F/A-18C/D Hornet aircraft will conduct these flyovers as a collaborative salute to healthcare workers, first responders, military, and other essential personnel while standing in solidarity with all Americans during the COVID-19 pandemic.

The flyover is being called America Strong.

The published flight path shows the jets leaving New York City around 12:20pm and heading east toward the South Shore of Long Island. Passing Hempstead and a little east of Bay Shore, the squadrons will swoop north and circle back west across the island and presumably pass over Stony Brook Hospital. From there the squadron will fly over the Long Island Sound and Connecticut turning south near White Plains to head to their next destination. 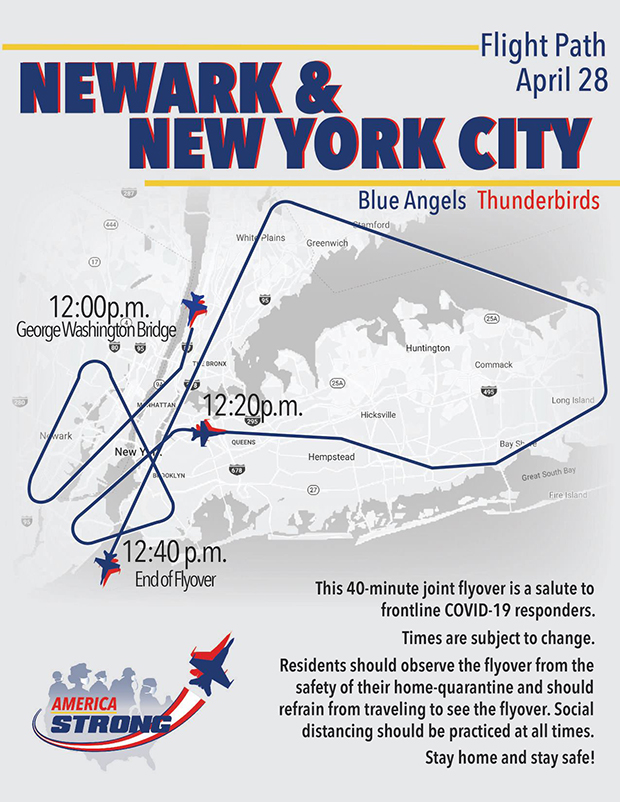 “We are truly excited to take to the skies with our Navy counterparts for a nation-wide tribute to the men and women keeping our communities safe.” said U.S. Air Force Lt. Col. John Caldwell, Thunderbird 1 and mission commander for the flyover. “We hope to give Americans a touching display of American resolve that honors those serving on the frontline of our fight with COVID-19.”

“We are incredibly honored to have the opportunity to salute those working on the frontline of the COVID-19 response, we are in awe of your strength and resilience,” said Kesselring. “Thank you to all of those in essential industries keeping our nation moving forward. We will get through this. We are all in this together.”

Residents along the flight path can expect a few seconds of jet noise as the aircraft pass overhead, along with the sight of 12 high-performance aircraft flying close in precise formation.

The squadrons will also perform flyovers in Trenton, NJ and Philadelphia, PA that day.

Officials urged residents in these areas to view the flyover from the safety of their home-quarantine and should maintain all social distancing guidelines during this event. People should also refrain from traveling to landmarks, hospitals and gathering in large groups to view the flyover.

The teams welcome and encourage viewers to tag the flyover on social media with the hashtag #AmericaStrong.