Nassau County, NY - April 25, 2017 - Nassau County Comptroller George Maragos released the 2016 unaudited fiscal results today and reported that the County is expected to end the year with a $38 million surplus in the primary operating funds based on Generally Accepted Accounting Principles (GAAP). The surplus is primarily due to $105.8 million in borrowing approved by the Nassau County Legislature and the Nassau County Interim Finance Authority (NIFA). On a budgetary basis, the County is likely to end with a surplus of $39.6 million. However, if other financing sources are excluded under the method prescribed by NIFA, the County should end with a negative result of $72.9 million.
Table 1 summarizes the major variances to the 2016 adopted budget. The recurring revenues were lower than budgeted by $82.2 million and recurring expenses were lower by $36.4 million. The resulting $45.8 million negative variance was reduced by $72.6 million in one-shot revenue items, $22.8 million in one-shot lower expense items and $62.0 million of operating expenses paid with borrowings, resulting in a potential $111.6 million budgetary surplus. However, after $72 million in expense transfers to non-primary funds, the year-ending budgetary and GAAP results are reduced to $39.6 million and $38.0 million, respectively.
Of the $72 million expense fund transfers, $43.8 million from debt service savings generated by bond premium, to be used for claims and judgments as required by NIFA, has already been approved by the Legislature and $28.2 million is pending legislative approval. These transfers are intended to pay future expenses such as litigation, bond indebtedness and Police District termination pay.
Without the $72 million in expenditure transfers, the County’s 2016 year-end results would have increased to a $110 million surplus on a GAAP basis, $111.6 million on a budgetary basis and would decrease to a negative $0.9 million under the NIFA presentation. Additionally, if $21.1 million accrued in the budgetary results (see Table 1 footnotes) for unpaid property tax refunds is reversed after ongoing analysis of GAAP rules, the year-end results would further improve to a $131.1 million surplus on a GAAP basis, $132.7 million surplus on a budgetary basis and to a positive $20.2 million on a NIFA presentation basis.
As a result of the $39.6 budgetary surplus after the $72 million in fund transfers, the unreserved fund balance in the primary funds would grow from $163.1 million to $202.7 million, as shown in Table 3. Without the transfers, the unreserved fund balance would grow to $274.7 million, and without the $21.1 million property tax refund accrual, the fund balance would increase further to $295.8 million.
The Structural Gap shown in Table 2, based on the $39.6 million budgetary surplus, will improve from the prior year, from negative $141.8 million to negative $45.5 million. Similarly, the NIFA presentation will improve from negative $125.3 million to negative $72.9 million.
The total outstanding long-term debt of the County and its component units will remain flat at $3.63 billion compared to 2015. Although the County issued $533.1 million in new debt, it was offset by maturities, refinancing, and debt defeasance.  Of the total long-term debt, $462.4 million debt of the Nassau County Tobacco Settlement Corporation is non-recourse to the Nassau County.
However, the remaining recourse debt of the County does not include an additional estimated $759.2 million of other liabilities or potential liabilities; including  $232.6 million owed to New York State Retirement Systems from the County’s continuing election to defer a portion of its annual pension contribution expense, $313.6 million in estimated property tax certiorari liability, and approximately $213 million of potential liability from certain utility litigation cases dating back as far as the 1990s. The County is still making legal arguments and negotiating to reduce this utility liability.
“While on the surface, the County financials appear to have improved, the Administration continued to rely on unnecessary borrowing,” said Comptroller George Maragos. “Nevertheless, the fund balance will increase, the structural gap will narrow and the NIFA presentation results will fall below guidelines. I urge the County Legislature to use the growing fund balance to restore bus services, increase funding for youth services, reduce fees and lower property taxes, especially for seniors and veterans. There is no need for the County to maintain potentially over $274 million in fund balances.” 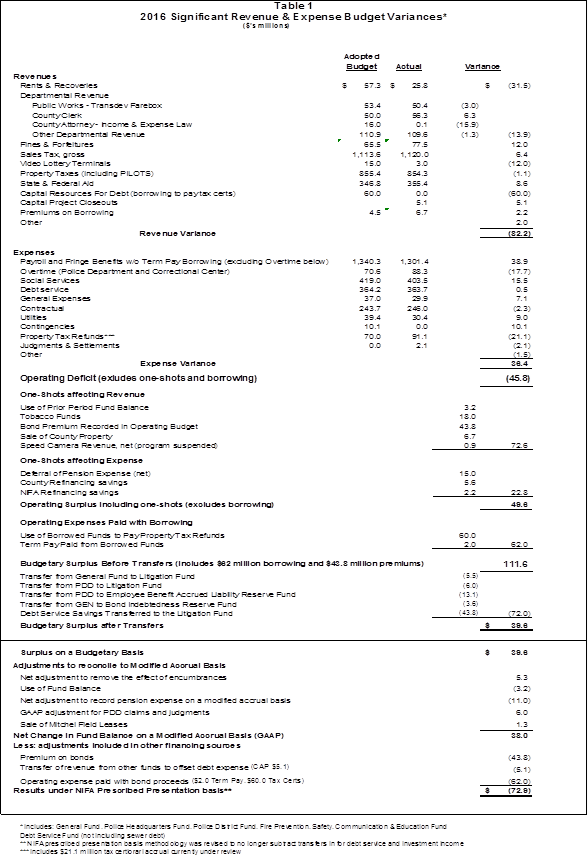 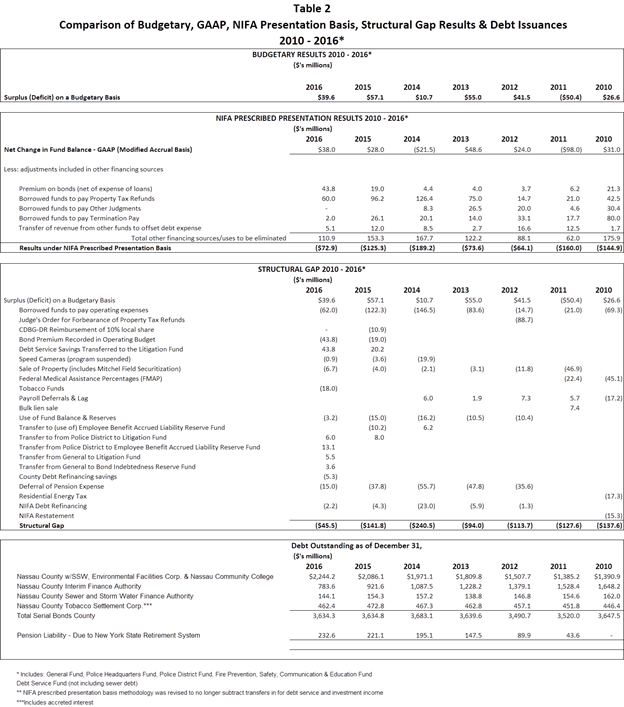