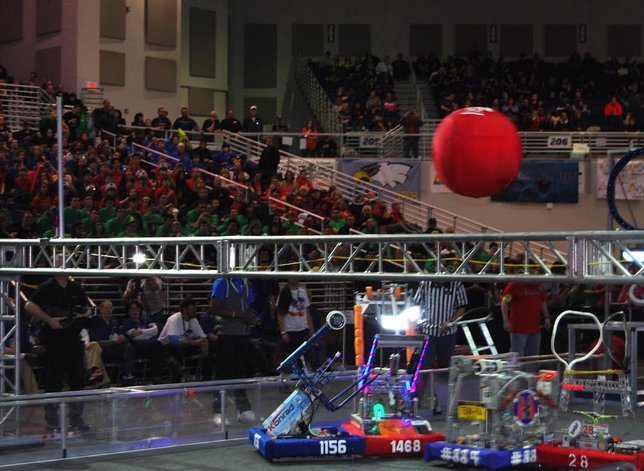 “All teams demonstrated tremendous teamwork, gracious professionalism, and critical thinking, but these winners went above and beyond to overcome the challenges of the competition,” said Joani Madarash, Executive Director of SBPLI, sponsor of the Long Island Regional FIRST Competition for all 15 years. “The fun and excitement of the competition was evident as many students, professional mentors, school groups and community members caught the spirit and came to cheer on their favorite teams as engineering and technology at work surpassed the excitement of a championship athletic event.”

With the hope of winning one of several coveted awards, high school students worked with professional mentors to design, program and build a robot over a six-week timeframe using a "kit of parts," which consists of some materials that can be used in whichever way teams would like and a standard set of rules that helps teams manage quantity, type and the price of their materials. The students gathered to compete with their robots in this year’s game, “Aerial AssistSM,” in which two Alliances of three teams each attempted to shoot as many balls as possible into goals during a two-and-a-half-minute match. Additional points were earned by robots working together to score goals, and by throwing and catching balls over a truss suspended just over five feet above the floor as they moved the ball down the field.


* The Chairman’s Award is the most prestigious award of the event and recognizes the team that embodies the goals and purpose of FIRST and best represents a model for other teams to emulate.

** These teams are eligible to participate in the FRC Championship that will take place April 24-27 at the Edward Jones Dome in St. Louis, MO.

SBPLI named Troy Douglas, a longtime volunteer at the Long Island FRC, as its Volunteer of the Year. Winners of the Dean’s List Finalist Award were Justin Green of the Half Hollow Hills High School West Robotics Team #3624 and Thomas Ciravolo of the Walt Whitman High School Robotics Team #2161.

CAPTION 1: A team member from the Mechanical Bulls of Smithtown, Team #810, gears up for an intense match at the School-Business Partnerships of Long Island, Inc.’s Long Island Regional FIRST Robotics Competition (FRC) at Hofstra University on March 29.