Meet one of the latest dinosaur discoveries from 66 million years ago, dubbed 'Chicken from Hell.' 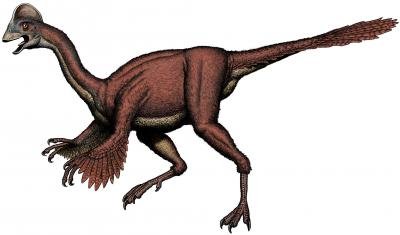 A dinosaur that has been referred to as ‘Chicken from Hell’ was formally introduced to the world this week after scientists’ analysis of the birdlike creature was published in the journal PLoS One on Wednesday.

Scientists have given the dinosaur nicknamed ‘Chicken from Hell’ an official name, calling it Anzu wyliei.

Anzu wyliei is said to have roamed western North America 66 to 68 million years ago in a hot and humid climate. Understandably, it was nicknamed ‘Chicken from Hell’ given its birdlike appearance. It stood about 7 feet tall, 11 feet long, weighed 500 pounds, had a toothless beak, a crest on its skull, the neck of an ostrich, long arms, 4 inch long sharp claws, feathers all over its body, slender hind legs and a long, strong tail.

Anzu wyliei is a dinosaur scientists have had little information on. Only fragments of remains were found, but by combining specimens from North and South Dakota, a nearly complete skeleton is available.

Anzu Wyliei lived toward to the end of the dinosaur age, along with the T-rex and stegosaurus.

While large in size to a human, Anzu Wyliei lived a dangerous life next to much larger dinosaurs. “These animals were clearly able to survive quite a bit of trauma, as two of the specimens show signs of semi-healed damage,” according to lead author Dr. Matthew Lamanna of Carnegie Museum of Natural History in Pittsburgh.

Collaborators in the published analysis on Anzu wyliei include Dr. Hans-Dieter Sues and Dr. Tyler Lyson of the Smithsonian Institution’s National Museum of Natural History in Washington, DC, and Dr. Emma Schachner of the University of Utah in Salt Lake City.