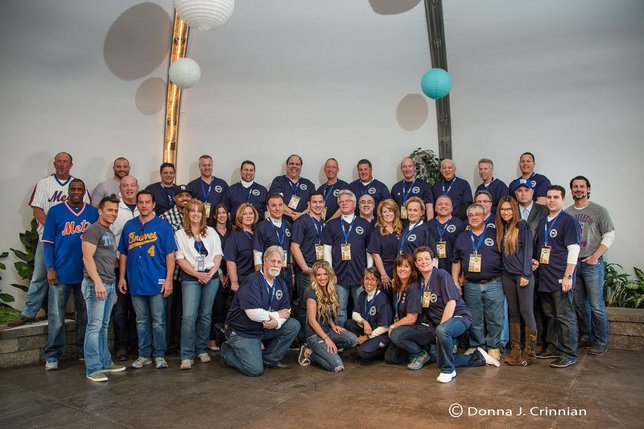 CFK Co-founder Kevin G. Harney of Stalco Construction said: "Tonight's reception raised $400,000, making it the most successful event in CFK’s nine-year history. We are grateful to all of those who joined us in recognizing the needs of families that face financial and emotional hardships due to a child's illness."

This year’s “Athletes & Actors – The Main Event” dinner-dance reception attracted numerous celebrities, who came out in force to support the organization. The guests included the following A-listers:

The reception took place at the Atlantis Long Island Aquarium & Exhibition Center in Riverhead, N.Y. The festivities begun with a BBQ and chili tailgate party in front of the Aquarium, followed by a private meet-and-greet session with celebrities and the main reception. The event included photo opportunities with celebrities, a casino with 20 game tables, a dance floor, and other games.

The non-profit serves as a financial lifeline of last resort after families have exhausted all other resources. It also has a goal of giving parents an opportunity to provide all available medical assistance to their children, regardless of the parents’ financial circumstances or the child’s long-term prognosis.

According to Harney, the organization offers help extending beyond payment of medical bills. “We reimburse travel costs related to cutting-edge treatments unavailable locally and provide aid to families unable to submit mortgage or utility payments due to healthcare-related expenses. We also assist parents faced with the heartbreaking task of making funeral arrangements for their children,” he said.

The stories of families who turn to CFK for assistance vary as much as illnesses suffered by their children.

CFK recently assisted the mother of Michael Hubbard, a teenage boy form Riverhead. Michael suffered extensive burns and a cardiac arrest due to a gel candle explosion. The accident caused widespread injuries, a permanent disability, and a prolonged rehabilitation. The boy’s mother sold most of her belongings and lived at a hospital taking care of her son for more than a year. CFK assisted the family with payments for food, cell phone bills, and medical and personal care supplies.

Earlier this year, CFK helped a low-income family by covering all funeral expenses following a sudden death of their five-year-old daughter. In another case this year, CFK has been providing travel expense reimbursements to parents of a four-year-old boy who suffers from up to 100 seizures ever day due to a neurological disorder. The family frequently travels to Boston Children’s Hospital for treatments.

CFK also assisted a family of a 13-year-old boy suffering from multiple medical conditions, including a seizure disorder, mitochondrial disease, and a tumor behind an eye. After the boy’s mother quit her job to care for him, the father’s income became insufficient to cover all of the on-going living expenses. CFK helped the family avert bankruptcy and loss of their home by paying a mortgage installment as well as utility bills.

In another recent case, the organization helped a family of a ten-year-old boy suffering from neuroblastoma, a malignant brain tumor. Local hospitals were unable to help the little patient, however a clinic in Texas offered to perform an experimental treatment. CFK provided funds that helped the family travel to Texas and pay for medical procedures. The treatment reduced the size of the boy’s tumor.

CFK also assisted a single mother of a five-year old boy awaiting a heart transplant. The mother and her child, who had already undergone three open-heart surgeries, spent many hours on a public bus commuting more than 30 miles twice a week to the Stony Brook University Medical Center for medical procedures. CFK purchased a car for the young mother. The following year, after the property in which the family rented an apartment had been foreclosed, CFK associates raised monies sufficient for two years of rent in a new apartment.

To support CFK and learn about the organization’s activities and upcoming events, please visit www.contractorsforkids.org or call 1-888-208-KIDS.