FIRST® Robotics Competition Buckeye Regional: Watch the Best of the Best in Robotics 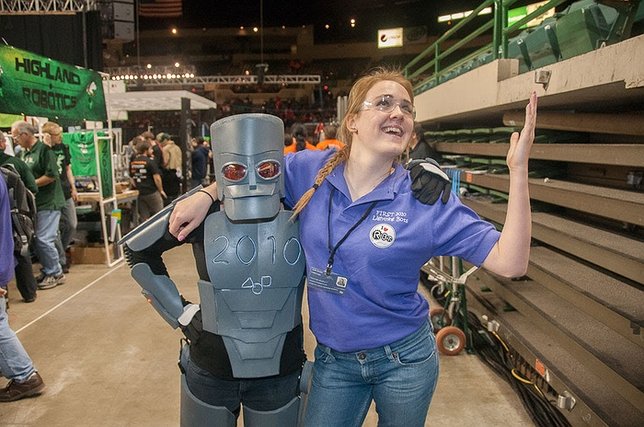 A creative mascot builds contagious team spirit with a student participant during the FRC Buckeye Regional.

“FIRST Robotics Competition (FRC) robots are big, measuring up to 6.5 feet tall and weighing up to 120 pounds; and they compete in high intensity robo-sports,” said Stephanie Brown-Houston, education specialist at NASA’s Glenn Research Center in Cleveland. “It takes a lot of hard work to develop a competitive robot and it shows when you see them in action at the Buckeye Regional.”

The FRC Buckeye Regional is a highly competitive, exciting and fun premier spectacular. It is a high-tech, spectator-friendly competition environment that has the feel of both a major sporting event and a rock concert, complete with cheering fans, crazy costumes, special lighting, up-beat music, dancing, a large video wall and energetic emcees and announcers.

It is also a celebration of science, technology, engineering and mathematics. Over 1500 local and international high school students from Kentucky, Michigan, New Jersey, New York, Ohio, Canada, Pennsylvania, West Virginia and Wisconsin will compete in an intense three-day event showcasing robots they designed, built and programmed. Click here to see a list of registered teams.

Students compete for awards and a spot at the FIRST Championship held in St. Louis, Missouri, April 27-30. FRC students are also eligible to apply for nearly $22 million in scholarships from more than 200 colleges and universities.

The competing robots are the result of six weeks of high school students, professional engineers and science mentors teaming up to design, build and program the most impressive robots you’ve ever seen to perform the tasks of the season’s game FIRST STRONGHOLD.

FIRST is built around two values, Gracious Professionalism and Coopertition. Gracious Professionalism rejects trash talk and chest-thumping, instead embraces empathy and respect for other teams and cooperation, emphasizing that teams can cooperate and compete at the same time but treat one another with respect and kindness in the process. Coopertition means competing always, but assisting and enabling others when you can.

FIRST was founded in 1989 by inventor Dean Kamen to inspire young people’s interest and participation in science, technology, engineering and math (STEM). A decade of data and research shows that exposing kids to fun, exciting FIRST programs builds 21st century work skills and greatly increases their motivation to seek education and careers in STEM fields.

NASA’s Robotics Alliance Project is one of the largest sponsors of FRC and a strategic partner. The Glenn Research Center is the largest sponsor of the FRC Buckeye Regional. Glenn’s engineers and scientists lend their time and talents to guide and mentor local high school teams.

Media attending FRC Buckeye Regional should confirm their participation with Jeannette Owens at 216-433-2990 or by email.