Once a Neo-Nazi, Csanad Szegedi will share his story with Chabad Lubavitch of Long Island on Sunday, March 6th. 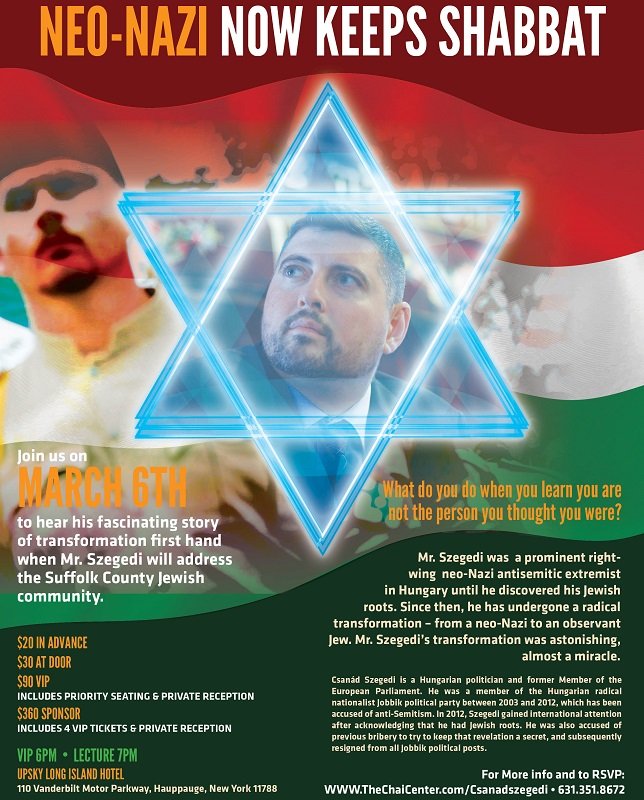 Csanad Szegedi, a former leader in the Hungarian political party Jobbik–a group which have been described as racist and anti-semitic–will be addressing the Long Island Jewish community on Sunday, March 6.
After joining Jobbik early in the party's history, Szegedi quickly moved up in rank, and by 2006 he had became vice-president of the party. In 2007, he was a founding member of the Hungarian Guard, the paramilitary wing of Jobbik, which was banned in 2009. Following the ban, he continued to serve in the European Parliament.
In 2012 Szegedi learned that his maternal grandparents were Holocaust survivors who decided to keep their identities secret after World War II. Hearing that his grandmother had been imprisoned at Auschwitz, Szegedi made a point of visiting the site where more than 1 million Jews were exterminated.
After discovering his Jewish ancestry, Szegedi resigned from all his posts in Jobbik. The entire party turned on him immediately, even those he considered close friends. “The best thing would be if we shoot you, so you can be buried as pure Hungarian,” one member told him.
Szegedi turned to a local Chabad-Lubavitch Rabbi, Slomó Köves, for guidance, and today lives as a proud and open Jew.
“Csanad’s story is a testament to the ultimate goodness of human character” said Rabbi Mendel Teldon, one of the event organizers. “This shows us, that facing your biggest fear, and being true to who you are, will always work out in the long run. We are very excited to have the opportunity for him to address our community.”
At the event, which is being co-hosted by Chabad of Mid-Suffolk, The Center and Chabad at Stony Brook, Csanad Szegedi will, with the help of an interpreter, share the story of his journey.
For more information, or to register, please visit Chabad Lubavitch of Long Island.