In front of a packed auditorium of more than 400 people, Congressman Suozzi fielded more than 50 questions from constituents at a town hall held at the Mid-Island Y Jewish Community Center in Plainview. 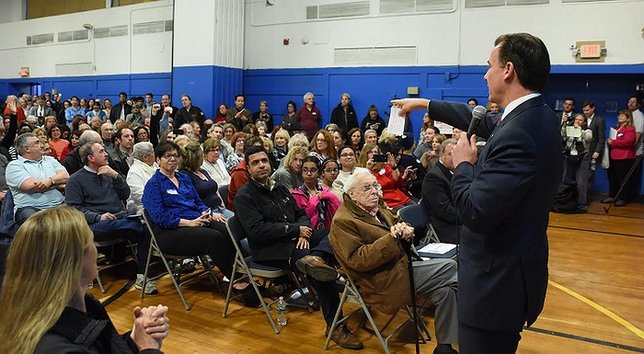 Glen Cove, NY - February 28, 2017 - In front of a packed auditorium of more than 400 people, Congressman Tom Suozzi (D-Queens, Long Island) fielded more than 50 questions from constituents at a town hall held at the Mid-Island Y Jewish Community Center in Plainview. Nearly 100 more people were unable to attend due to capacity limitations. The town hall was broadcast live on Facebook with more than 6,500 views that night and approximately 3,000 views since. 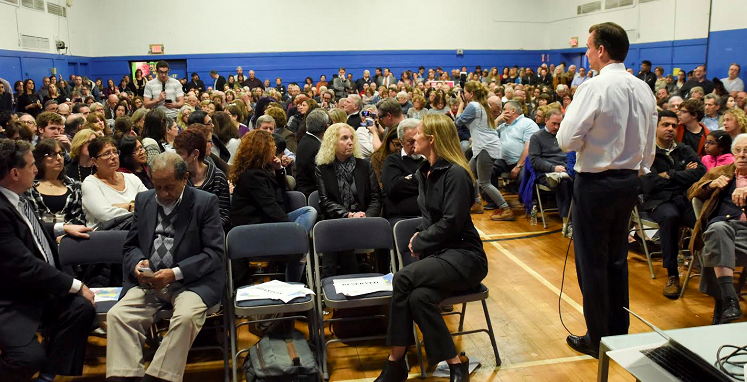 Congressman Tom Suozzi addresses a crowd of over 400 constituents.

Congressman Suozzi answered questions for nearly three hours, going well over the time the meeting was scheduled to end. Topics included the Affordable Care Act, President Trump’s travel ban, the White House’s relationship and communications with Russia, the environment and national security, among others. It was Suozzi’s first town hall since taking office in January, and the only town hall held on Long Island so far this year.

“People have been clamoring to have their voices heard and a town hall was the best way for me to hear directly from the people I represent,” said Suozzi. “They wanted to know that I’m committed to mending, not ending the Affordable Care Act, that I stand against President Trump’s discriminatory travel ban and that we need to use more renewable energy in order to combat climate change.

Suozzi has always held town halls in his previous elected offices, as Mayor of the City of Glen Cove and Nassau County Executive. He also held over 25 last year during his congressional campaign. Suozzi has stated numerous times that he likes meeting face to face with the people he represents and he plans to hold several town halls all over his district.

“The blessing,” Suozzi said at his town hall, “is that so many people are active and engaged.”

Suozzi used the town hall to officially launch “NY’s Third will be Heard,” a campaign to get constituents in New York’s 3rd congressional district to get more politically active by signing up to one of 16 regions in the district and working together to become more engaged with what is going on in our government. More than 450 have signed up so far at www.heardinthethird.com.

“Now more than ever, people want to get involved in what is going on nationally, and how it affects their lives. We need to all work together, no matter our political persuasion, to produce positive changes at the local, state and federal levels. I encourage as many people as possible to sign up and join our team,” said Suozzi, “We can't let this energy dissipate.