The Minstrel Players Present David Lindsay-Abaire's "Wonder of the World"

Northport’s oldest theatre group, The Minstrel Players Theatre Company of Northport, kick off their 2014 season with "Wonder Of the World" 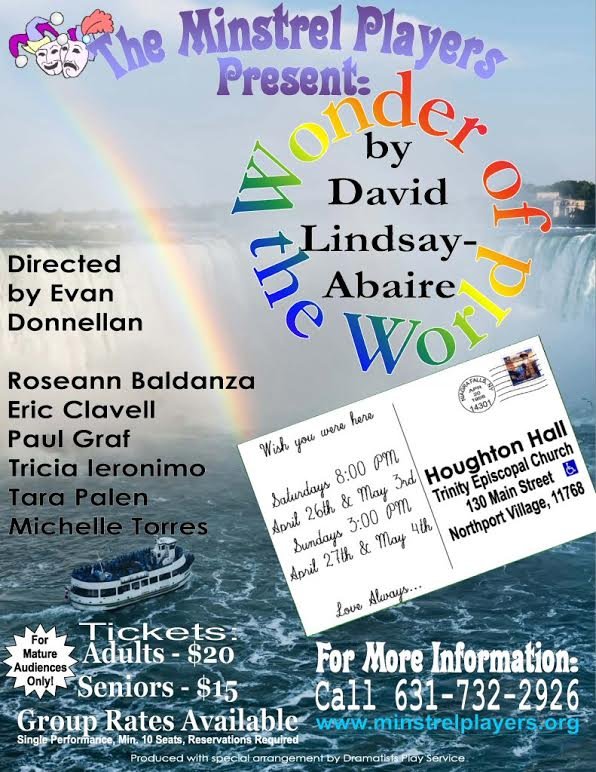 Northport, NY - February 27th, 2014 - Northport’s oldest theatre group, The Minstrel Players Theatre Company of Northport, kick off their 2014 season at Houghton Hall - Trinity Episcopal Church, 130 Main Street in scenic Northport Village with a staging of David Lindsay-Abaire's absurd comedy, "Wonder Of the World".  Performances are over two weekends on Saturday,  April 26th and May 3rd at 8 P.M. and a 3 P.M. matinee performances on Sunday, April 27th and May 4th.

"Wonder Of the World" is directed by Evan Donnellan who also has a small character role.  Playwright David Lindsay-Abaire is best known for the drama "Rabbit Hole" but had a sleeper hit with "Wonder" when it played on Broadway in 2001 with a cast featuring Sarah Jessica Parker, Alan Tudyk and Amy Sedaris.  This Minstrel production features a cast of veterans and newcomers: Roseann Baldanza, Eric Clavell, Paul Graf, Tricia Ieronimo, Tara Palen and Michelle Torres.  The ‘World Class’ crew is rounded out with Robert Cashman – Technical Director, Laura Morella – Assistant Director, Bernie Caprera – Lighting Director, Esteban Lopez – Stage Manager, and Alyssa Williams - Crew.

The Minstrel Players are thrilled with to have this play open the 2014 season which will also feature their 3rd Annual All-Original Short Scene Festival in July and the Long Island debut of the Edgar Award winning mystery "The Game's Afoot" by Ken Ludwig this October. As always, we will cap off our year with an annual staging of Charles Dickens' "A Christmas Carol" --- done in the unique style as only the Minstrel Players can!

The Minstrel Players are committed to bringing high quality, affordable theater to the Long Island Region.  Tickets are $20.00 for adults and $15.00 for Seniors and Children under 12. Group tickets are available for parties of 10+ at $2 off per ticket. For more information please call (631)732-2926 or visit the Minstrel Player’s official website.  Hope to see you at the show!