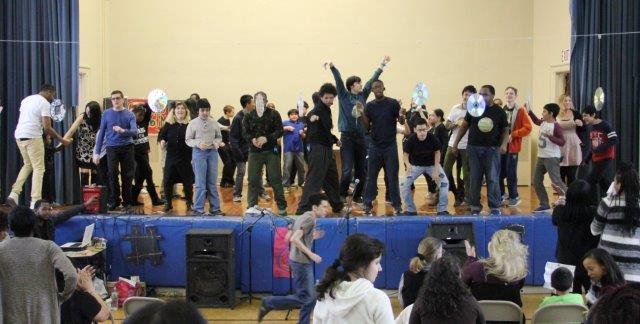 West Hempstead, NY - February 19th, 2016 - Nearly 120 children on the autism spectrum recently showcased their talents and abilities during the “Gersh 201.6 FM” radio themed live Winter Show held at Gersh Academy in West Hempstead, where students ages 5 through 21 sang and performed choreographed numbers alongside live tracks of popular radio tunes from personalized playlists they made in class.

Culminating the students’ many hours of hard work and rehearsal time that began in January, the show featured a total of 12 acts that were proudly watched by over 200 parents as well as Gersh Academy students, staff and teachers.

Performing to a medley of radio hits of yesterday and today, elementary students sang and danced along such songs as One Direction’s “What Makes You Beautiful” and Pharrell Williams’ “Happy”; middle school students performed to such tunes as Good Charlotte’s “Game On” and Billy Joel’s “Piano Man”; and high school students strutted their stuff to such perennial favorites as “We Will Rock You” by Queen, “I’m Every Woman” by Chaka Khan and “On The Radio” by Donna Summer.

In between musical performances, students also showcased their acting and comedic chops through a staged radio newscast and comedy skit.

“As delightful and enjoyable as it is to watch our students perform in our Winter Show each year, our Winter Show is far more than just a show – it is an experience with great takeaways for our students,” explains Gagliardi. “This show gives our students a forum for channeling their artistry, creativity, self-expression and camaraderie while overcoming the many challenges that so many children with developmental disabilities often face, including speaking, social anxiety and sensory integration deficits that can make it difficult to be exposed to loud sounds, music or noise.”

Beyond choosing their own music, learning the lyrics and mastering choreographed numbers for performing in the show, the students also designed their own stage sets, which included hand-made vinyl records. They also created themed baskets that were raffled off in an auction held during the show, benefiting Gersh Academy’s special events and projects.

About Gersh Academy
Gersh Academy, located in West Hempstead on Long Island, New York is led by veteran Principal Celeste Gagliardi and a team of dedicated professionals. The school provides K-12 educational services for students on the autism spectrum from across the New York Metropolitan area and Long Island.

It is the mission of Kevin Gersh, the founder of the school and related programs, as well as the teachers and staff of the school, to provide exceptional services and programs for special education students and, whenever possible, for students to be given the opportunity to return to their home school districts with all the tools and skills they need to be successful and achieve their full potential. For more information about Gersh Academy, please visit their website.