Hall speaks of massive changes in store for the Nassau County municipality. 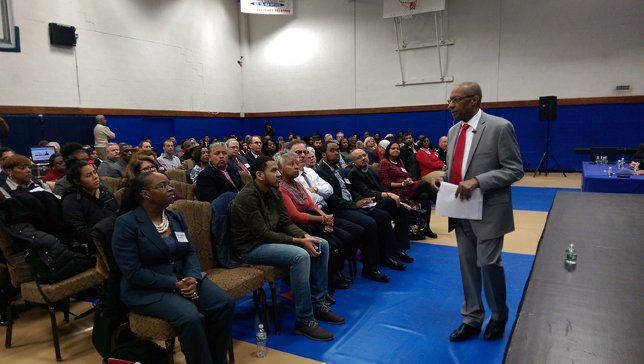 Hempstead Mayor Wayne J. Hall hosted his annual “State of the Village” address in the recreation center at Kennedy Memorial Park on the evening of Feb. 16, and told the packed house in attendance that the municipality is in the best shape it’s ever been in over the course of the 12 years he’s been in charge. 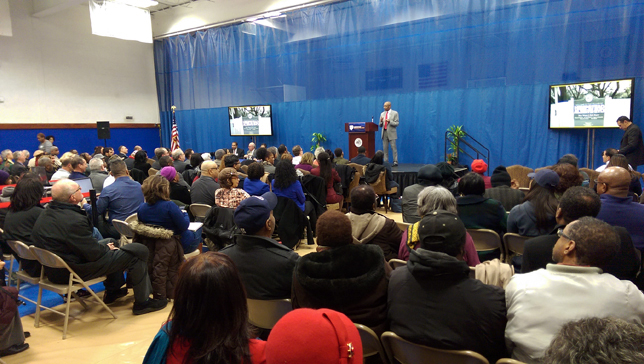 Hall told the packed house in attendance that the municipality is in the best shape it’s ever been in over the course of the 12 years he’s been in charge. Photo Credit: Chris Boyle.

Evolution and change was the theme of mayor Hall’s address; Hempstead, an Incorporated Village in the Town of Hempstead, Nassau County, that boasts 53,891 residents, is a special place to live and through the efforts of the current administration, Hall said, it’s evolution in recent years has been a sight to behold.

“I've been in Hempstead over 38 years…the day after my wife and I were married, we moved into Hempstead. My two sons were born and raised in Hempstead. My heart is here in Hempstead,” he said. “So whatever you may think about me…we may have our differences, but keep in mind but I'm going to do the best that I can for the Village of Hempstead. I put your interests first, and what I do is for all of you. I feel that we should have the same things that all of these other Villages that we’re surrounded by have. I want to bring this Village to where it should be...we are going to move the Village of Hempstead forward.” 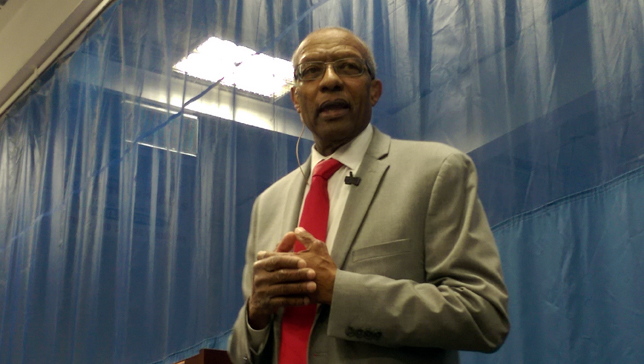 Hall noted that the purpose of the evening’s presentation was to show residents how far their hometown has come in the past 12 years that he's been mayor, in addition to giving them a glimpse into some exciting developments coming to the Village in the near future.

“I always ask myself when I start a speech, are we better off today than we were 12 years ago?” he said. “I really think that the majority of you feel that the Village really is in better shape than it was 12 years ago. I was a Trustee for the Village for six years before I came became Mayor, so I knew what was going on...we're a small, minority Village, so why did we have such a big $6 million-plus deficit at the time? In addition, our bond rating was just above 'junk' status. We had a very negative outlook.” 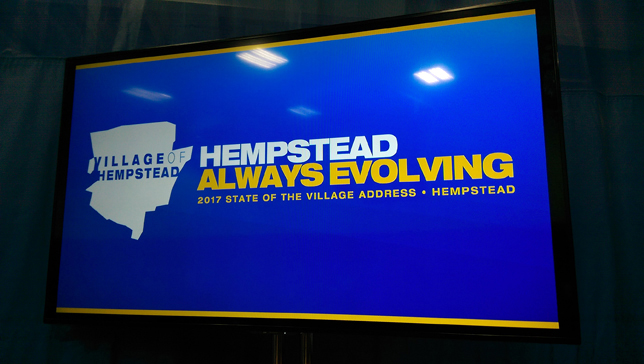 Evolution and change was the theme of mayor Hall’s "State of the Village" address. Photo Credit: Chris Boyle.

Today, Hall noted, things are quite different in the Village of Hempstead under his watch; after borrowing deficit finances from the state, the Village paid off the majority of its deficit, tightened its collective belt, and eventually turned their finances around.

“In 2016, we had an A-1 rating with Moody's, and with S&P we have a Double A-minus with a stable outlook,” he said. “People might ask, what does that mean for us? It means we have a lower cost of borrowing, and we were able to refund some of the debt at 1.5% and save the Village almost a million dollars.” 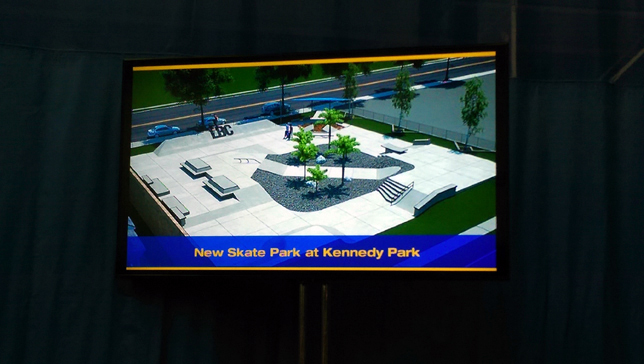 Much time was also spent on the rejuvenation of Hempstead's business community, with Hall noting that there have been numerous grand openings at the retail and business levels over the past year. Hall also spoke about the Village’s efforts to get rid of bars that were considered a public nuisances, and the adoption of a more stringent licensing program for such establishments seeking to set up shop within the area going forward. 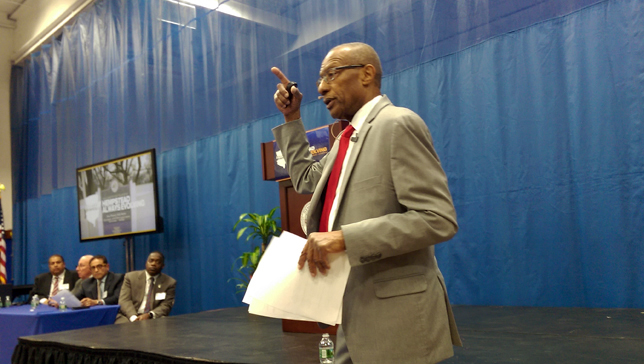 Mayor Hall noted that the purpose of the "State of the Village" presentation was to show residents how far their hometown has come in the past 12 years that he's been in charge. Photo Credit: Chris Boyle.

However, the big news was his announcement of a $2.5 billion dollar downtown revitalization project, which will see new buildings being constructed that will house residential apartments as well as ample space for retail and other business ventures.

“A lot of times, businesses don't want to invest in a minority community, and I've been trying my best for the past 10 years to have re-development in our Village. Now, we have an investor that is willing to put $2.5 billion dollars into our community,” Hall said. “Hempstead is always evolving, things are always changing in our Village...a lot of young people want to live in Manhattan, but can't afford it. Our train and buses can easily get you into Manhattan, Brooklyn...the transportation is there. So our plan is to build mixed-use housings on Main Street, consisting of apartments on top and retail on the bottom. That's what we're going to do here to help attract these young people and make Hempstead a destination.” 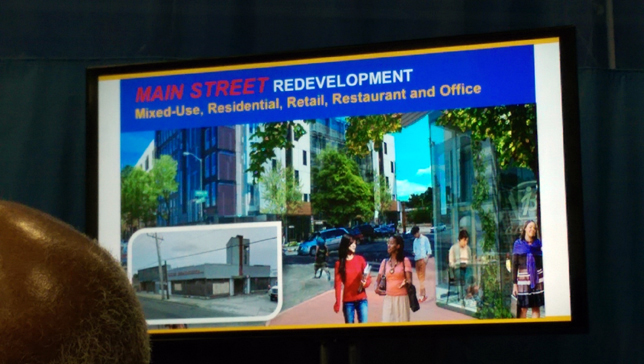 A plan was also discussed to build on under-utilized parking lots within the Village; the resultant revenue from doing so, Hall said, is estimated to bring in millions of dollars (estimated at $70 million within the first ten years) into the Village, much of which will be funneled into the Hempstead school district. In addition, Hall also revealed that Hempstead has received an anti-poverty grant from New York State Governor Andrew Cuomo in the amount of $1.5 million dollars; a task force had been put together to decide on how best to utilize this money to benefit the community, Hall said.

“In Hempstead, only 52 percent of students graduate from high school...if you don't have a high school diploma, your potential earnings are about $21,000 a year.” he said. “We're going to use this grant money for job training to ensure that when our students get out of high school, they're going to be job-ready. We’re going to make sure that our kids are ready, that people who have been incarcerated and have no hope are ready to earn a living and become productive members of society.” 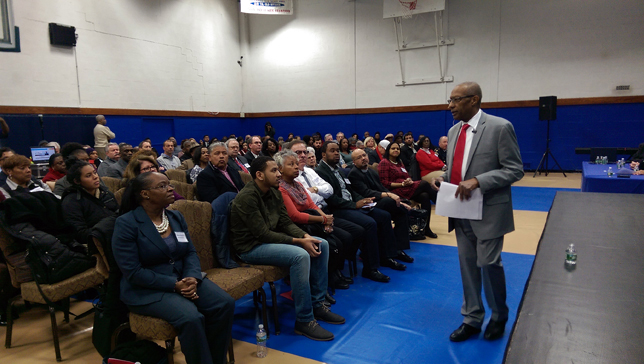 Mayor Hall: "I want to bring this Village to where it should be...we are going to move the Village of Hempstead forward.” Photo Credit: Chris Boyle.

Hall also touted the Village's new and improved website, which offers local residents the ability to pay their bills online now; in addition, he also talked about the websites multi-lingual capabilities, allowing users to select from any of 20 different languages to view it in. Also on the technological front, the Village has been in the process of installing new security cameras in high-crime areas to help identify perpetrators of crime and ensure that they are swiftly brought to justice.

Hall also talked about developments in the Village’s Parks and Recreation Department, noting the possibility of a second Recreation Center being added somewhere in the Village to supplement the one in Kennedy Memorial Park. He also mentioned upgrades to existing parks, including new artificial turf fields, an upcoming skateboard park that will be built in Kennedy Park, and a summertime Music Academy. In addition, Hall also praised the Hempstead’s beautification program, which sees student volunteers from Garden City's Adelphi University coming in every spring to plant flowers throughout the municipality, and discussed new efforts undertaken to rid the area of so-called "zombie homes," properties that have been abandoned by their owners and have fallen into disrepair.