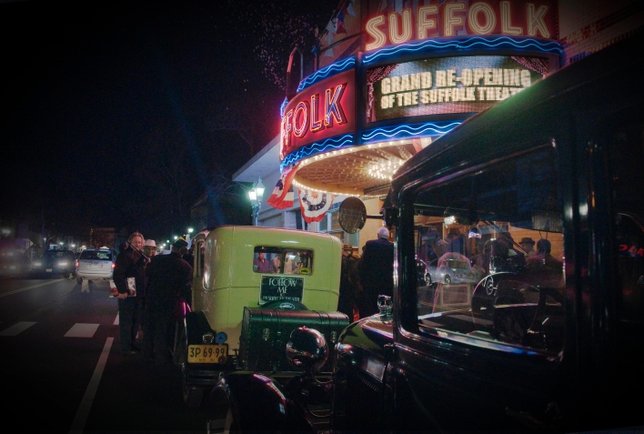 Riverhead, NY - February 15th, 2014 - It was one year ago this month that the historic Suffolk Theater ushered in a new era in Riverhead and the East End of Long Island, with newsboys on Main Street shouting “ EXTRA EXTRA – READ ALL ABOUT IT” as cigarette girls handed out programs.  Suddenly, The Suffolk Theater - a new jewel in the Long Island arts scene - was forged. One year and hundreds of shows later, the Theater is going strong and celebrating its first anniversary with a special gala, presented in glorious roaring twenties style on March 1st, 2014.
The Suffolk Theater’s First Anniversary Gala will be a 1920’s themed event, “costume optional” and it will feature dinner and dancing to the sounds of the Grammy-winning Vince Giordano & The Nighthawks.  Known for their work on HBO’s Boardwalk Empire, as well as for critically-acclaimed films such as The Aviator and The Cotton Club, this big band orchestra is one of the most sought jazz era ensembles in the country.
The event will also include a special Gala Menu and a wine selection including choices from throughout the local vineyards.  According to General and Artistic Director Dan Binderman, “this will be a night to remember, commemorating the rebirth of one of the Northeast’s most majestic theaters.”
DJ Dancing at a “Speakeasy After-Party” will start at 10PM and will be offered to the general public for only a $10 ticket (free for gala attendees).