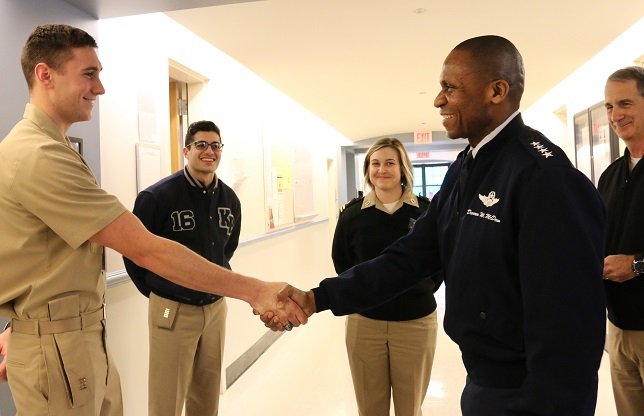 “It was a great honor to have General McDew visit U.S. Merchant Marine Academy,” said Rear Admiral James A. Helis, Superintendent.  “His outspoken support of the U.S. Merchant Marine highlights the significant role that merchant mariners play in supporting our military and keeping Americans safe.”

McDew began his visit addressing the Regiment of Midshipmen, faculty and staff.  Citing the successful deployment of troops and materiel for Operation Desert Shield/Desert Storm 25 years ago, he emphasized the importance of the maritime industry to our National Defense and his concern about the reduced number of U.S.-flagged ships operating today. He said,  “you are one of the most powerful assets we have.”

Addressing the midshipmen, he said, “I want to thank you for choosing to put that uniform on, for choosing to put yourself through what you’re putting yourself through,… and then leave here and take on a job in this profession.”  He continued, “you chose something bigger than yourselves.  You chose a future that serves others, and I thank you for that.”

“My biggest concern is can we still do it? Do we have that strength in the maritime industry to get done what we need to get done?” McDew asked.  “I need your help.”

The General took questions from a dozen midshipmen and faculty on a range of issues including leadership development, industry trends, joint-service challenges, and recruitment and retention of merchant mariners.

After the assembly in Ackerman Auditorium, McDew visited the full-mission bridge and engine simulators and barracks. He spoke directly to midshipmen who shared their experiences as students, members of the regiment and as future officers. Band Company Commander, Midshipman 1st Class Blair Roberts said, “to listen to General McDew speak and to have the opportunity to meet with him was a remarkable opportunity.  I appreciate the vested interest that TRANSCOM has in the Merchant Marine Academy, and I am thankful for the support that General McDew has for the Regiment of Midshipmen.”