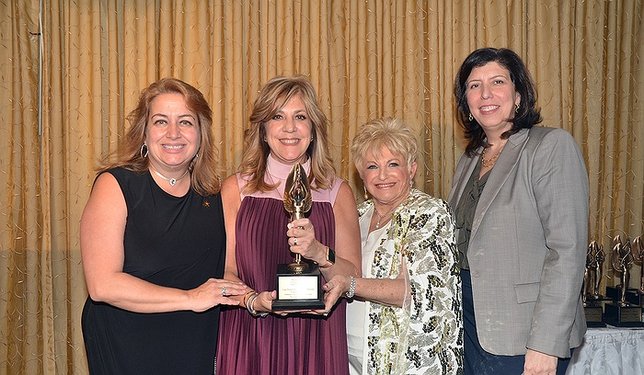 Photo by: YMCA of Long Island

Long Island, NY - January 26, 2017 - The YMCA of Long Island’s Board of Directors is proud to announce that Anne N. Brigis, CEO of the YMCA of Long Island, was recently honored with two prestigious honors for her incredible efforts and dedication to empowering youth, foster wellness and facilitate economic growth throughout Long Island. Additionally, she was named one of Long Island’s Power Women in Business by the Long Island Press and recognized as one of two Distinguished Leaders on Long Island by the Advancement for Commerce, Industry and Technology (ACIT). Ms. Brigis was presented with the Long Island Press award at the recent Power Women in Business Awards & Networking Event and the ACIT award at the organization’s recent Distinguished Business Leaders & Awards Luncheon.
“These recognition's are a testament to the incredible team of staff and volunteers in place at the YMCA of Long Island, which is dedicated to provide high quality health, wellness for children and community empowerment services for all of Long Island,” said Anne Brigis, President & CEO of the YMCA of Long Island. “It was an incredible experience to be acknowledged among such influential peers. Thank you Long Island Press and the ACIT. I am humbled by this recognition and grateful to receive these honors.”
Anne Brigis has been CEO of the YMCA of Long Island for more than five years, and during that time has championed youth development and offered a platform available to improve community health. As a result of her commitment to excellence, she was able to establish the Great South Bay YMCA facility as the largest YMCA location on Long Island. Among the YMCA’s most recent accomplishments under Ms. Brigis’ leadership is a 30,000 square-foot Healthy Living Center that will be a standalone extension of the Huntington YMCA for expanded fitness and preventative health programs focused on chronic disease prevention and recovery. Ms. Brigis is also leading the vision for a state-of-the-art, $18.8 million facility in Wyandanch. The new facility recently was awarded $3.5 million through an Empire State Development grant as recommended as one of 121 priority projects by the Long Island Regional Economic Development Council.
Anne Brigis has also helped facilitate large-scale renovations and additions to YMCA facilities. These projects included the 11,000 sq ft. expansion of the William and Martha Entenmann Pavilion at Great South Bay focused on providing high quality childcare, the Patchogue Family YMCA location, the Sammis Children’s Center, Martone Children’s Center, and the opening of the YMCA Boulton Center for the Performing Arts—a $2.5 million, state-of-the-art performing arts center that offers a full spectrum of cultural activities, including theatre, concerts lectures, meetings and film.
“The YMCA of Long Island has many exciting things in store this year – including the planning of our newest branch in Wyandanch and the construction of our Healthy Living Center in Huntington,” added Ms. Brigis. “I am so proud to continue to lead the YMCA and share these milestones with Long Islanders.”
Anne Brigis has been recognized several times for her exemplary leadership. She is most proud of the awards received from the Association of YMCA Directors for Outstanding Service and Leadership Achievement in 1998 and again in 2004. Additionally, she was awarded the “Save a Child” award from the Rotary Gift of Life in 1993 and Long Island Business News’ “Top Women of 2007”. In 2010, she was unanimously selected for the Great South Bay Boulton Center for the Performing Arts “Ambassador of the Arts.”
For more information about the YMCA, visit http://ymcali.org/.
About the YMCA of Long Island
Long Islanders of all ages and fitness levels learn to live their healthiest and fullest lives inside the YMCA’s state-of-the-art facilities, with the addition of prevention and treatment services through YMCA Family Services. The Y offers cultural arts programming for all ages at the YMCA Boulton Center for the Performing Arts located in Bay Shore. The YMCA of Long Island is a cause-driven 501c3 nonprofit organization that works to strengthen communities through programs and services that focus on youth development, healthy living and social responsibility. For information and locations, visit www.ymcali.org.