The star linebacker of Notre Dame, thought to have lost his girlfriend to leukemia in September, never actually did. 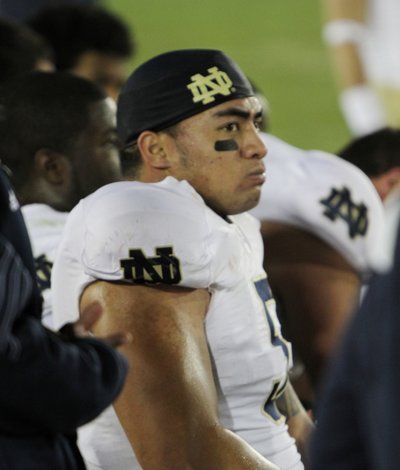 It was a tale of tragedy and triumph. Manti Te’o, the star linebacker of Notre Dame and prospective NFL first-round draft pick, lost his Grandmother and girlfriend within six hours of one another on September 11th 2012. His grandmother passed at the age of 72 while Lennay Kekua, his girlfriend who had survived a brutal car crash months earlier, succumbed to her fight with leukemia.

Fueled by heartbreak and determined to honor the memory of his loved ones Te’o took to the football field, where he led Notre Dame to a 20-3 upset over Michigan State in which he notched 12 tackles on the day. What’s more, he went on to become the Heisman Trophy runner up and took Notre Dame back to the National Championship game—a title the team has not won since 1988.

Though he did not win the Heisman (non-quarterbacks almost never do) or the national title (Alabama steamrolled over Notre Dame) his accomplishments were still of great exception. The once storied school had not been in contention for a championship in a long time; to return it to relevancy under such a heavy emotional burden was no small task. It was outstanding, it was awe-inspiring, it was incredible, it was amazing… it was a hoax.

Manti Te’o is, of course, a phenomenal linebacker, and he did lose his grandmother last September, but his girlfriend did not die. In fact, according to a report filed by Deadspin, Lennay Kekua never existed. There are no death records following her supposed loss to leukemia, no records of her time at Stanford University, and no trace of a Lennay Kekua outside of a few social media accounts. The few pictures of the girlfriend that had been made public were actually of an entirely different Californian woman who did not have leukemia, had not been in a devastating car crash, was not named Lennay Kekua, and had never met Manti.

When reached for comment, Te’o said “[I] developed an emotional relationship with a woman I met online. We maintained what I thought to be an authentic relationship by communicating frequently online and on the phone, and I grew to care deeply about her.”

If his account of this bizarre situation is to be believed, that would mean he engaged in a three-year relationship with a fake woman he never met in person and carried it out entirely through phone and Internet conversations. He would be the victim of one of the most elaborate catfishing scams ever established (“catfishing” is a strange sort of prank in which false romantic relationships are established through online personas), and made a fool of on the national stage.

Notre Dame, which stands behind Te’o as the innocent victim of a horrible joke, has hired an independent investigative firm to get to the bottom of the situation, and try to discover exactly what really happened in this peculiar love story.