Movie Roundup: TMNT and Guardians of the Galaxy Prove Staying Power as ‘The Expendables 3’ Fails to Even Make 3rd Place at the Box Office

Even new release 'Expendables 3' couldn't push 'TMNT' and 'Guardians of the Galaxy' out the of the top spots at the weekend box office. Could piracy be the factor that killed 'Expendable 3' at the ... 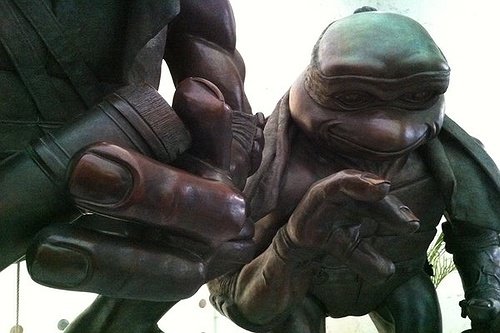 In a surprise turn of events, neither new releases ‘The Expendables 3’ or ‘Let’s Be Cops’ were able to boot off ‘Teenage Mutant Ninja Turtles’ and ‘Guardians of the Galaxy’ from the top two spots at the weekend box office.

‘Guardian of the Galaxy,’ which has been out for its third weekend remained at second place at the weekend box office. It brought in $24.7 million.

And while expectations for ‘Expendables 3’ were high with actions stars like Sylvester Stallone, Mel Gibson and Arnold Schwarzenegger in the film, it failed to even achieve third place at the weekend box office. It took fourth place with $16.2 million.

Many are pointing to an issue of piracy for the cause of the film’s poor performance, while others are saying piracy alone would not be reason for the numbers to fall short so badly. It may be a matter of franchise fatigue setting in, especially since it is the third installment.

Other new release this weekend, ‘Let’s Be Cops’ took third place at the weekend box office with $17.7 million.

It’ll be interesting to see what happens next weekend – if ‘Teenage Mutant Ninja Turtles’ and ‘Guardians of the Galaxy’ can remain in the top holding positions.

For those looking for an action, crime thriller:

For those looking for a drama flick: