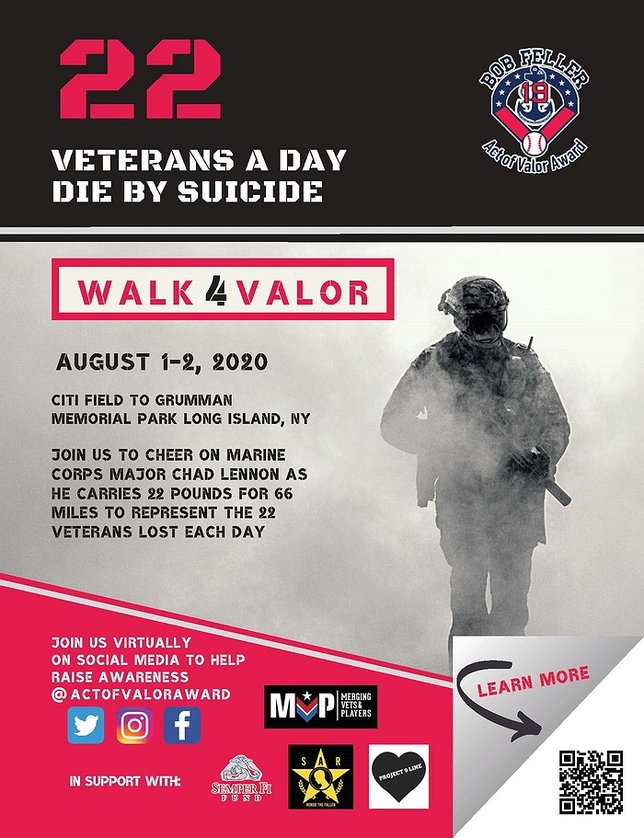 On August 1-2, United States Marine Corps Reserve Major Chad Lennon will hike 66 miles carrying 22 pounds to represent the 22 Veterans who die by suicide each day. He will begin at Citi Field in Queens, NY and end his journey at Grumman Memorial Park in Calverton, NY.

Walk4Valor is sponsored by the Bob Feller Act of Valor Award Foundation with support from The Veterans Suicide Awareness and Remembrance Flag Corp, Semper Fi Fund, Merging Vets and Players and Project 9 Line to raise awareness of the Veteran suicide epidemic and honor the fallen.

It is also our commitment to bring hope to living Veterans to know that they are not alone.

Our foundation’s founder and president, Peter Fertig, believes as a nation, we can join in unity to remove the stigma associated with Veteran Suicide. “Major Chad Lennon of the United States Marine Corps is asking America to join us in unity and to help support his 66-mile hike as he carries 22 pounds in memory of those service members who die every day from suicide. Please help honor him throughout his journey.”

As Marine Corps Major Chad Lennon embarks on this journey, we ask you to join us at Grumman Memorial Park on Sunday, August 2 at 10am or at home virtually on our social media platforms, @ActofValorAward on Twitter, Instagram and Facebook.

This hike will not only raise awareness of Veteran suicides, but will also display unity, camaraderie and togetherness. We want all Veterans and active military to know that we’re in this fight together! You are not alone! This is a Buddy Check!

The Bob Feller Act of Valor Award Foundation strives to acknowledge and support the sacrifices made by service members, veterans and their families.

Peter Fertig founded The Bob Feller Act of Valor Award with the support of the , U.S. Marine Corps, U.S. Navy, Major League Baseball, the Cleveland Indians, the National Baseball Hall of Fame and the gracious consent of Mrs. Anne Feller, the San Diego Padres, and the family of Jerry Coleman.

Please visit our website actofvaloraward.org to learn more about our foundation