Trotta: "Evan, you are going in the right direction by achieving the rank of Eagle Scout at the age of 16 and you will continue to excel." 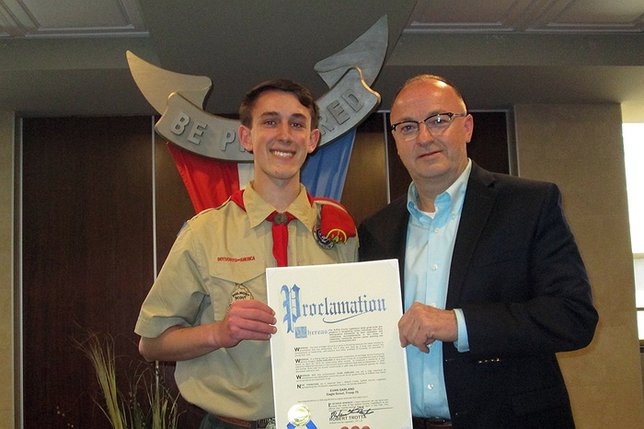 Smithtown, NY - May 11, 2018 - Suffolk County Legislator Rob Trotta recognized Evan Garland of Boy Scout Troop 75 at his recent Eagle Scout Court of Honor. Evan’s goal as young scout was to become an Eagle Scout in order to follow in the footsteps of his father and uncle, who were Eagle Scouts. His desire was so earnest that he joined the same troop, 75, that his father had been in when he became an Eagle Scout.
For his Eagle Scout project, Evan decided to do something that honored the veterans who died on September 11, 2001. He consulted with the director of Calverton National Cemetery and they decided that he would construct a memorial in the section where the veterans who died on that fateful day were buried at Calverton.The memorial would include a walkway and a garden where the families could come and pay tribute to their loved ones.
Suffolk County Legislator Trotta said, “Evan, you are going in the right direction by achieving the rank of Eagle Scout at the age of 16 and you will continue to excel because of your passion and dedication to the public and your community.”
“I applaud your efforts and urge you to keep up the good work,” added Trotta.
Legislator Robert Trotta represents the 13th Legislative District.